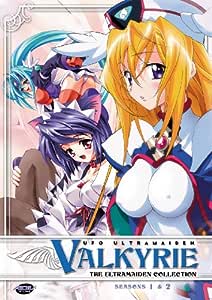 Valkyrie is a member of the Intergalagtic Royal Family of Valhalla. She is elegant, beautiful and a really bad driver. She crashes her spaceship right through the roof of the Tokino bathhouse and onto the head of its owner, Kazuto. To save his life, Valkyrie gives up half of her very soul. Oddly enough, it works! Katzuto is resurrected! But, there's one small side effect: Valkyrie. She has transformed into half her age. She's cute, cuddly and nutty as a pit-bull. (And then things start to get weird.) Valkyrie and Kazuto fall in love. Housekeeping cat girl Ms. Sanada is sent to protect Vakyrie. Hydra the warrior princess has some size issues. Princess Laine has some shopping issues. Earthly sweetheart Akina has some emotional issues. And, Valkryie's dog Spot has some issue issues. So grab a towel and take a dip into the silly, sexy space-romp - UFO Ultramaiden. It's time to answer the age-old question of the universe - does size matter?

3.9 out of 5 stars
3.9 out of 5
28 customer ratings
How does Amazon calculate star ratings?
Amazon calculates a product’s star ratings based on a machine learned model instead of a raw data average. The model takes into account factors including the age of a rating, whether the ratings are from verified purchasers, and factors that establish reviewer trustworthiness.
Top Reviews

J3F
4.0 out of 5 stars Valkyrie
Reviewed in the United States on September 17, 2013
Verified Purchase
Partial Nudity. Not really harem, but almost comes close. So a princess of Valhalla escapes her duty to be married off for political motivations. She crash lands on Earth and into the life of Kasito. For compensation, she gives him 1/2 her soul and changes into a little girl. That's where the adventure starts.

She changes back to and adult once she kisses Kasito in times of crisis. . .Together they battle other princesses, pirates, ghosts and bag guys. Mainly its other princesses.

This box collection has 5 disc to include the Season 1, Season 2, and OVA Special that is sold separately. . .no need to buy it.

seshomarou
5.0 out of 5 stars Its out there
Reviewed in the United States on May 20, 2013
Verified Purchase
This is a confusing series at first. I thought they had the episodes in the wrong order or something, but they just sort of had a jump start. I love the theme music to this show, and both the japanese and the english voice acting is wonderful. The animation hits the spot. It is not upper crust, but it really sets the proper mood for the show, sort of like school rumble, which I also love. If you do not like silliness this anime is not for you. But if you like wacky comedy that delves into an occasional dramatic side, then this series is well balanced. One or two episodes do test the bounderies of mayhem, but it stayed true enough to the story to keep it going. Valkyrie is an alien princess from the planet Valhalla, who has run away from an arranged marriage, and in the process crashed her ship into the Tokino Bathhouse mortally wounding the young "Manboy" who inherited it, Kazuto Tokino. To keep him from dying, Valkyrie gives him half of her soul to keep forever, which reduces her to a child, however whenever the souls of Valkyrei and Kazuto are perfectly aligned she can reclaim her true form for a short time ( a transformation which provides mere fan service insues, and transformations of other characters abound as well supplying further fan service). While in her adult form Valkyrie has amazing powers and wields "The Key of Time". Naturaly, the two drag their friends and family into many insaine adventures, and comedy abouds. It is a really fun show to watch, but the music is absolutly beautiful, Decembr Princess, Meguriai, Agape, All in All, and Itoshii Kakera are my favorites. I also bought the soundtrack UFO Princess Valkyrie: Best Theme Songs. This set includes the first two seasons, with two bridal training episodes in between, on five discs, wich are so hard to get out of the container, that I put them in separate cd holders to keep from damaging them while getting them out. All in all a great purchase! Season 1 has 12 episodes. Then there are 2 bonus episodes. Season 2 also has 12 episodes, for a total of 26 episodes. seasons 3 and 4 are sold on a separate save dvd. Enjoy!
Read more
4 people found this helpful
Helpful
Comment Report abuse

Elvin
4.0 out of 5 stars I hate the case
Reviewed in the United States on September 3, 2013
Verified Purchase
This is a good classic anime. The DVDs all played fine and arrived on time. The cover art is some of the best i have seen. But for anyone who buys this be warned the DVDs come in a stack-pack format. This means all the disc are stacked on top of each other. This can cause damage to your DVDs and its hard to get to the disc you want to watch. I was not happy about this. But out of respect to such a great classic anime I will deduct only one point.
Read more
Helpful
Comment Report abuse

Kristy
2.0 out of 5 stars UFO: Ultramaiden Valkyrie Collection
Reviewed in the United States on March 27, 2013
Verified Purchase
I admit I liked the show, there were some funny moments and I'd recommend it to all anime fans. However I would like to complain about its packaging. The discs are all stacked on top of each other, so it is a real hastle every time you want to watch a specific disc. If I am going pay $30 for a boxset, I would at least wish for the discs to be placed in a different slot.
Read more
One person found this helpful
Helpful
Comment Report abuse

Bryan
5.0 out of 5 stars UFO Ultramaiden Valkyrie
Reviewed in the United States on February 23, 2013
Verified Purchase
Great show, the thing I liked most was they released this which allowed me to complete my collection. I got season 3 & 4 from Funimation but for some reason they dont have Season 1 & 2 and this new reprint made this a perfect and affordable way to finally complete this show in my collection without breaking the bank and I also find the DVD Case to be way nicer then Funimation's casing for Season 3 & 4.
Read more
One person found this helpful
Helpful
Comment Report abuse

Randy Velasquez
5.0 out of 5 stars UFO Valkyrie
Reviewed in the United States on August 24, 2014
Verified Purchase
I personal like this anime. Its a bit childish, but it's OK .the plot is not a huge. I recommended it
Read more
2 people found this helpful
Helpful
Comment Report abuse

Mitchell
5.0 out of 5 stars Anime was Good
Reviewed in the United States on September 16, 2013
Verified Purchase
its came in good condition with no problem it is an excellent anime and it was amazing to watch and see
Read more
One person found this helpful
Helpful
Comment Report abuse
See all reviews from the United States

Honechokoku
5.0 out of 5 stars Thank you!
Reviewed in Canada on May 29, 2014
Verified Purchase
I've wanted this for so long, but it was usually to expensive wherever i looked, but here i actually got a decent price, i couldn't be happier!
Read more
Helpful
Sending feedback...
Thank you for your feedback.
Sorry, we failed to record your vote. Please try again
Report abuse