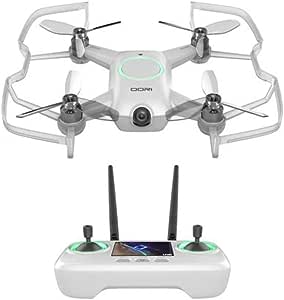 Brand: UVify
3.1 out of 5 stars 17 ratings
| 12 answered questions
Currently unavailable.
We don't know when or if this item will be back in stock.

OOri is simple to fly, fast, and most of all, fun. OOri delivers the UVify experience in an entirely different form factor and is the world’s capable FPV micro drone. OOri comes with everything you need to immediately get airborne right out of the box.

Describe your products in 3 words.

When we looked at existing micro drones and other racing drones, we found them severely lacking in the areas of technology, capability, build quality, and accessibility. Although there are many drones that are sold for very low prices, we found that the motors used them were only good for 100 hours due to their brushed design. We also found that other drones very easily crashed and essentially ended up as landfill. And this led us to the idea of building a micro drone that has the power to fly at incredibly fast speeds, is highly maneuverable, can have its colors changed from the control so you can compete with your friends (and foes), and had a vision position system so novices could experience the fun of racing while easily controlling their drone.

For the pro, we wanted to provide a drone that had the option to access high power and maneuverability and so we built OOri with the ability to change its flight mode to satisfy those who simply want to play and have fun as well those who are at the pro level.

OOri is designed from the ground up to be fun and to endure extreme flying. It is equipped with UVify 0804 brushless motors, which enable it to go extremely fast and handle the most complicated aerobatics. Our motors will theoretically last indefinitely unlike most other micro drones which have brushed motors which only last for around 100 hours, which is only a few days of flying. OOri’s ability to change colors via its bundled controller means you can fly with your mates and know what team they fly for in the light or dark. As Team UVify pilots and some of our employees have competed in the most prestigious racing events such as the DR1 Racing, DRL and the Red Bull Championship, we brought what we learned from competing in those arenas and built OOri to be the best micro racing drone in the world.

OOri has been featured in many leading publications such as engadget, Tech Crunch and more due to its capabilities and many innovative functions. In addition, OOri won many accolades from some of the most prestigious media in the world, including best micro drone from Drone Rush, Top Tech Emerging Tech from Digital Trends, and more.

Finally, OOri has a controller with an integrated FPV screen and was inspired by gaming so anyone can pick it up and easily get airborne.

What has been the best part of your experience?

Really, the whole OOri experience has been wonderful from the ideation to the production but if we had to single out one best part, it would have to be the great feedback that we’ve received from people who are having fun with their OOri.

The worlds first smart racing drone: oori is the drone for everyone. Easy to control, fun to fly, and most of all, fast. The latest addition to the UVify product line delivers the UVify experience In an entirely different form factor. Power to the people: performance-tweaked brushless UVify motors coupled with UVify sensor Tech means you fly faster with confidence. Oori is the worlds fastest and most agile production Micro drone. Hold position: integrated sensors means oori holds its position with ease. Flatten the learning Curve and fly carefree. Focus on your flying moves knowing that oori’s ground proximity sensor has your back. Flying colors: push a button and oori is any color you imagine. Know who your teammates are when racing with tweakable LEDs. Lock-on, pop-off prop protector: lock-on, pop-off prop protector. Lock on for prop protection. Pop off for power and agility! Save props when mastering new moves. Get props when showing your moves full on. Palm pilot: fits in your palm-fly circles around your friends, then Wave goodbye when oori leaves them floundering in its wake. Unmatched technological prowess in a micro drone. Optimal size for racing: sharing the DNA of uvify’s multiple-award winning draco series of racing drones, oori is best-in-class in every area that matters - speed, agility, technology, design and build quality. What's in the box?: * UVify oori * oori transmitter with FPV screen * 1 x 660 mAh battery * prop guards * 8 x propellers (4 spare) * tool kit * spare bolts (for when prop guards are removed)