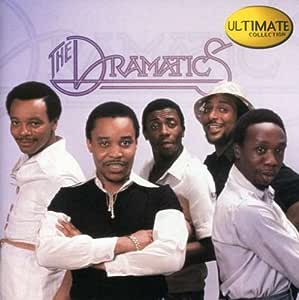 Sold by: MovieMars-CDs
Have one to sell?
Sell on Amazon

The Dramatics Format: Audio CD
4.8 out of 5 stars 255 ratings
Amazon's Choice recommends highly rated and well-priced products.
Amazon's Choice for "the dramatics cd"
See all 7 formats and editions Hide other formats and editions
Includes FREE MP3 version of this album.&nbspProvided by Amazon Digital Services LLC. Terms and Conditions. Does not apply to gift orders.&nbspComplete your purchase to save the MP3 version to your music library.
Available at a lower price from other sellers that may not offer free Prime shipping.

With these soul legends scoring hits for so many labels, a one-label anthology ain't gonna cut it; this beauty puts their biggest Volt, Cadet, ABC and MCA hits on one CD for the first time! Includes In the Rain; Whatcha See Is Whatcha Get; Me and Mrs. Jones; Hey You! Get off My Mountain; Be My Girl; Shake It Well; I Can't Get over You and 13 more hits!

4.8 out of 5 stars
4.8 out of 5
255 global ratings
How are ratings calculated?
To calculate the overall star rating and percentage breakdown by star, we don’t use a simple average. Instead, our system considers things like how recent a review is and if the reviewer bought the item on Amazon. It also analyzes reviews to verify trustworthiness.
Top reviews

johnfTop Contributor: Classical Music
TOP 1000 REVIEWER
5.0 out of 5 stars Wonderful vocals from the Dramatics.
Reviewed in the United States on April 7, 2017
Verified Purchase
The Dramatics had a unique thing going for them. Most vocal groups had a lead singer who sometimes shared leads with a tenor or bass, whichever was the opposite of his voice, and the others were harmony and backup only. The Dramatics, at least in their 70's heyday had five strong singers, all of whom sang lead, sometimes taking turns in the same song as they did with their first big hit, Whacha See Is Whacha Get from the summer of 1971.Not only that, but on uptempo songs like that they did some fast and vigorous dancing, more than most groups would dare to do if they had to sing, too. Only the Temptations had five strong singers and dance moves to rival the Dramatics. You simply couldn't ignore the Dramatics first hit with it's big orchestral opening and Latin beat. Based on a Flip Wilson catchphrase, it was a truly dramatic song that just grabbed you and made you pay attention.

The Dramatics, like many R&B groups, began singing doo-wop in high school, this time late in the era, in the early 60's. They were from Detroit and in this case you have to pay attention to Ron Banks, a founding member and the high voice of the group. He is the only constant member from beginning to end. The Dramatics had so many personnel changes It would take a complicated chart to list them and show when they were in the group. sorry, but I won't even try. In this case it got so bad that when two members left the group angrily in 1972 they hired a couple guys and toured as the Dramatics leaving Ron to hire new members and tour as Ron Banks and the Dramatics. That was a messy affair that ended up in court with Ron Banks winning total rights to the name.

The big break came in the late 60's when the group became associated with label owner Eddie Wingate and his producer Don Davis. After Wingate sold his label to Motown (who didn't want the Dramatics) they all ended up in Memphis, where Wingate wanted to create a blend of the Memphis and Motown Sounds. He never did this, but he and Davis got the Dramatics signed to Volt and turned them over to producer/songwriter Tony Hester, who wrote almost all their songs through 1975 including their two big hits.

Their other big hit, of course, was In the Rain, which over the years has become a super-classic song. It was a big departure from the pounding rhythm and dramatic presentation of Whacha See is Whacha Get. Usually a label wants a group to do something similar to the hit song, but In the Rain was like the total opposite, a slow jam with a sad story.There had been a late '71 single, Get Up and Get Down, that didn't do anything on the pop charts (#78). But it was a dance-oriented song and might have done better if it was 1976. In the Rain with its storm-sounds opening and trippy guitar echoes was just what everybody wanted in early 1972 and became their biggest hit ever, selling a million and getting a gold record.

The Dramatics never had a big pop crossover hit after that but like many groups remained a solid presence on the R&B charts through 1980. After 1975 their songs were often written by Don Davis or Cecil and Shirley Womack. These later songs are full of 70's funk (Shake It Well), disco (Finger Fever) and ballads (Ocean of Thoughts and Dreams). my favorite of this late period is I Just Wanna Dance With You, a funk number in a kind of Kool and the Gang style. From the earlier songs, another personal favorite is their take on Me and Mrs. Jones, Billy Paul's million seller from late 1972. Billy brings out more of the pain of the song but the Dramatics make it into a vocal tour de force that will blow you away. There are some wonderful vocals on this disc and that is what you go to the Dramatics for.

The songs here span a number of labels but Hip-O is part of Universal who owns most of the masters and licensed the original masters for what they didn't own. The sound here is excellent as is the quality of the original productions. With 20 songs you can't go wrong with this collection.

John-Texas
5.0 out of 5 stars Old School, can't bet it
Reviewed in the United States on November 26, 2018
Verified Purchase
Always have been a fan of the Dramatics and I have several CD's of them, but there was a couple of songs on this CD that was not on the other CD that I have. So broke down and ordered the CD and was not disappointed. This music never gets old nor do you get tired of hearing it.
Read more
Helpful
Comment Report abuse

Jackie M. Baker
5.0 out of 5 stars Sounds great and contains a lot of our favorite songs
Reviewed in the United States on May 12, 2020
Verified Purchase
My grandson loves this CD. He sings along with all of the songs. He had a big smile on his face when he opened the CD and that smile returns every time he plays the CD.
Read more
Helpful
Comment Report abuse

M. Pick
5.0 out of 5 stars Please Spread the LOVE
Reviewed in the United States on January 26, 2020
Verified Purchase
One of the greatest albums of all time. Melody and rhythm are for all decades of music lovers... I walked into this group only knowing "In the rain" and finished this album loving every second!
Read more
Helpful
Comment Report abuse

Al A
5.0 out of 5 stars Dramatics
Reviewed in the United States on June 22, 2020
Verified Purchase
This is an excellent compilation of the best songs by the Dramatics. There are favorites and others. But top to bottom excellent songs.
Read more
Helpful
Comment Report abuse

FlowerBiscuit
5.0 out of 5 stars STILL KICKING
Reviewed in the United States on September 13, 2020
Verified Purchase
Absolutely love this music today. One of the baddest groups of their time
Read more
Helpful
Comment Report abuse

Eric L. Spinks
5.0 out of 5 stars Ultimate Collection: The Dramatics
Reviewed in the United States on October 13, 2015
Verified Purchase
I grew up listening to this group "The Dramatics" along with the Isley Brothers, Billy Paul, Norman Connors are some of the top singers I listened to growing up. The music reminded me of such things a our annual family reunions when I was a child, and other gatherings, like house parties and hanging out with friends.....aaahhh! Those were the days.
Read more
One person found this helpful
Helpful
Comment Report abuse

Tom E. Foster
3.0 out of 5 stars Not that great
Reviewed in the United States on July 25, 2020
Verified Purchase
From top to bottom the hit was not their did not like
Read more
Helpful
Comment Report abuse
See all reviews

Paul Bartley
5.0 out of 5 stars Groove To The Beat
Reviewed in Canada on May 26, 2016
Verified Purchase
Too many classic groups or singers to chose from but one of my favorites are The Dramatics. Turn down the lights, hold her close and groove with your favorite someone.
Read more
Report abuse

Page 1 of 1 Start overPage 1 of 1
This shopping feature will continue to load items when the Enter key is pressed. In order to navigate out of this carousel please use your heading shortcut key to navigate to the next or previous heading.
Back
Next
Pages with related products. See and discover other items: the dramatics