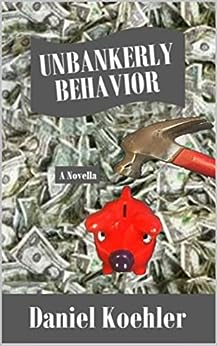 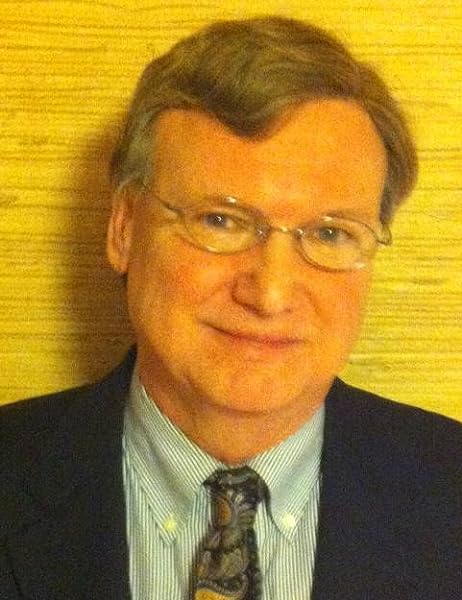 by Daniel Koehler (Author) Format: Kindle Edition
See all formats and editions
Sorry, there was a problem loading this page. Try again.
Bank president HENRY POTTS has a sweet deal. He is looting his bank under the guise of a cost-cutting “Unbank” marketing campaign concocted by JOHN JIMPSON, his son-in-law with a roving eye for bank secretaries. Enter CLYDINE CLUMM, a honky-tonk angel on the rebound, and all hell breaks loose.
Read more
Previous page
Next page

I first got the idea for UnbankerlyBehavior in 1983 while sitting in my office at Union National Bank in Little Rock reading anarticle in The American Banker abouttwo guys who tried unsuccessfully to rob a bank by hiding inside a washingmachine carton.
This book was originally part of my first novel, Flyover Country, which, I ultimatelydecided, had more than enough subplots. Still, I loved the idea of a bankdubbing itself "The Unbank" like Union National had in 1969, when it was ownedfor a brief time by a Houston, Texas, car dealer named Harlan Lane, whoultimately went to prison for bank fraud.
So, I resurrected the subplot and fashioned it into thisnovella.
Almost anyone can own a bank, including the lame, the halt,and automobile dealers like Harlan Lane, who had run Union National aground ten yearsbefore my tenure there began. When I joined Union National Bank as controllerin 1979, Hall McAdams and Bob Connor assigned me the same executive office Lanehad occupied. It was as large as a branch bank and looked like a palacecompared to the New Yorkgarret I had previously occupied.
I remember then hoping Harlan Lane hadn't jinxed it for me.
I was a married twenty-eight year old with an alphabet soupof credentials behind my name (BA, MBA, and CPA) and had just returned homefrom New York City,which, to my dismay and that of my Bostonbride, Edna Ellen, had failed to take heed of my mighty management talents. Luckily for me, the McAdams family had. They ran the bank superbly, and we all prospered during my tenure there. The patriarch, Herbert McAdams, II,was the inspiration for the character of white-knight banker, Fletcher Lennox,since "Mr. Mac," as he was known, rescued the Union National Bank from Harlan Lane. Working for the McAdams family was the best job I ever had.
However, if there is indeed such a thing as a "license tosteal," it surely has to be a bank charter. Banking is a business where theFederal government insures your liabilities, i.e., customers' depositsentrusted to you, in exchange for a submarket rate of return and the occasionaltoaster premium. You must promise to do as little as possible with the moneyentrusted to you, save stuffing your investment portfolio with Federal debtsecurities. You must also agree to build large, superfluous headquarters ineither the neoclassical "wedding cake" style of architecture or the"International" style, which is known for mirrored structures that resemblemutated Euclidean geometry. It is understood, of course, that your bank mustendeavor to throw up branches at every city intersection and constantly annoythe public with all manner of immediately forgettable and ultimately futilebank advertising.
But most of all, you must be prepared to entertain lavishly,which, according to my friend, British banker, Sir David Clementi, is de rigueur if you're selling the samefinancial commodity as everybody else.
However, should you exhibit "unbankerly behavior" and failto accomplish these onerous tasks, you couldface the prospect of prison.

Unscrupulous bank president, HENRY POTTS, is looting the Diamond  State Bank from inside the Executive Suite under the guise of a cost-cutting "Unbank" campaign. But soon, a string of financial catastrophes at the bank soon focuses intense regulatory scrutiny on Potts himself. The Unbank campaign is the brainchild of JOHN JIMPSON, Potts's son-in-law with a roving eye for bank secretaries. Enter CLYDINE CLUMM, a honky-tonk angel on the rebound, and all hell breaks loose.

DANIEL KOEHLER is the author of four novels, FLYOVER COUNTRY (2004), THE SLEEPING CAB (2006), UNBANKERLY BEHAVIOR (2008), and SPLITTING WASHINGTON (2010). His short pieces have appeared in The Best of Tales From the South, The Birmingham Arts Journal, New Works Review, The Rusty Nail, Bareback Magazine, The Storyteller, Inner Sins, The Harvard Bulletin, among others. Literary honors include finalist status in three international screenplay competitions and regional awards for his short stories.
Prior to his writing career, he pursued professional interests in New York City. He has written software used extensively in the financial sector. He attended Leopold-Franzens Universität in Innsbruck, Austria, and is a graduate of the University of Notre Dame and Harvard.
Read more

Prior to his writing career, he pursued professional interests in New York City and later wrote software used in the financial sector. His educational background includes a year at Leopold-Franzens Universität in Innsbruck, Austria, and degrees from the University of Notre Dame and Harvard. He resides with his wife and three children in Little Rock, AR.

Q1. What prompted you to become a writer?

To quote Rocky Balboa: “Because I can’t sing or dance.”

In truth, I certainly can’t say (like I see elsewhere on such a topic) that I wrote little stories in crayon or put on neighborhood plays as a kid. I was a typical product of the late 50’s; our family ran a bakery; I went to parochial school and was interested in baseball and sports. Dad went to college but mother didn’t, so he encouraged her to read widely. There were always a lot of books around the house; my dad primarily read nonfiction but liked Hemingway, O. Henry, Spillane, and Harold Robbins. Harold Robbins was kind of my sex primer when I was ten or eleven. My mother read only fiction and was a fan of Michener, Irwin Shaw, John O’Hara, and Taylor Caldwell.

My father had a humorous story published in Boating Magazine when I was twelve and got $300 for it. That got my attention. I wrote for the high school newspaper and they let me write funny stories, which I patterned on Mad Magazine or TV skits. Then, in college as a reporter for the campus rag, I got to interview a couple of famous authors and poets—Gwendolyn Brooks and Beat Poet Alan Ginsberg. I’d never met anyone like them before, and because of them I discovered the expatriate authors of the 1920s—Hemingway; Fitzgerald; Dos Passos; Henry Miller; Anais Nin. I was immediately smitten with the literary lifestyle. I was a foreign exchange student in Austria (like John Irving) and almost didn’t come home. I graduated Notre Dame with a degree in Econ to mollify my father, but really wanted to be either a folksinger or a writer. Unfortunately, the Vietnam War nearly got me and I had to go into the Army, although it was over by the time I finished basic training.

After I got out, I had to get on with the tedious business of making a living. I moved to New York City, got married, and worked in business. The only writing I did was alumni pieces for my college bulletin. I remember “tarting up” the news about my classmates as though they were characters in some sort of noir crime novel.

Afterwards, I moved home to Little Rock, AR, to raise my family, and the writing went dormant. I collaborated with a friend from grad school on a couple of satirical pieces that never got published, but mainly was just a dad who worked for a bank, wrote software on the side, and played keyboards in a rock band on weekends.

When my bank got merged, I formed a software company and sold my prosaic little PC software to bank clients. The good thing about this was that most of the income came from annual license renewals, so once the software was written, I didn’t have to do much work. That gave me the time and income to try my hand at novels. That’s kind of where I am today; I write for pleasure and at my pace, not deadline, since I have other income. My only regret is that I never got to be an expat writer like my heroes of the 1920s.

Q2. Who were the authors you read in your youth?

At school, if you finished your work early, the nuns let you read until the bell rang. I discovered adventure and science fiction in the meager school library. The first memorable books I read were “Fleetfoot the Cave Boy” by Robert Nida; “Wild Animals I Have Known” by Ernest Thompson Seton; “The Adventures of Ulysses” by Gerald Gottlieb; “Five Against Venus” by Phillip Latham. I also read sports books by Clair Bee and Guernsey Van Riper.

One day Dad bought a junior Encyclopedia Britannica and each night I’d take a volume to bed, say A-B, and just flip through until I fell asleep.

Of course, I devoured comic books like DC Action Comics, graduated to "Mad Magazine," Forrest Ackerman’s "Famous Monsters of Filmland," and then "Classics Illustrated." Later, I got into Poe (after seeing the Vincent Price scary movie, “Tales of Terror”) and also classic horror writers like Bram Stoker, Wilkie Collins, and Mary Shelley.

Read more of this interview.