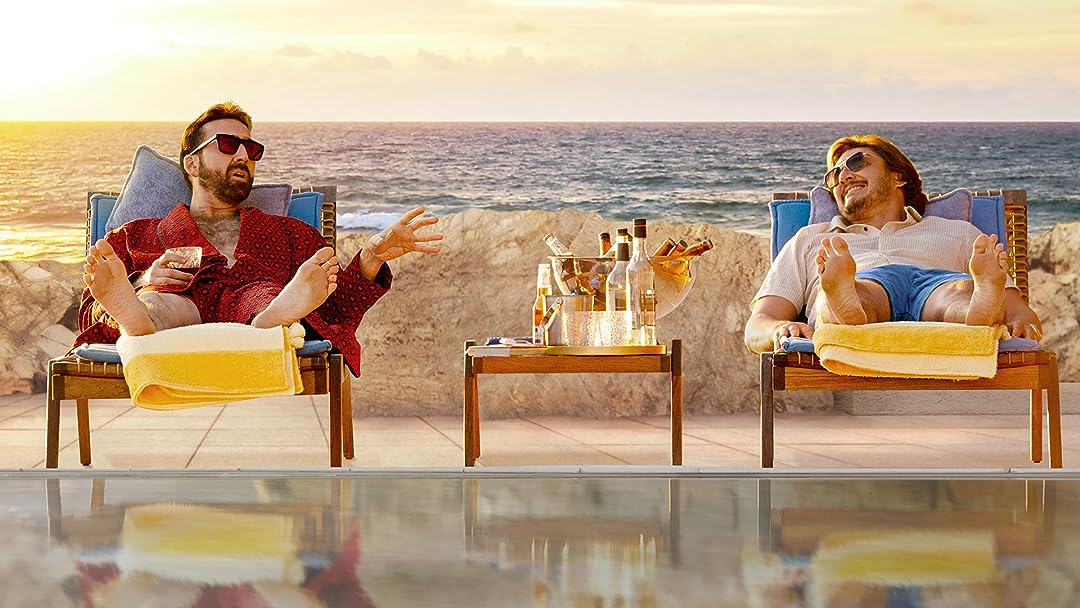 The Unbearable Weight of Massive Talent

(12,649)
7.01 h 47 min2022X-RayHDRUHDR
In this action-packed comedy, Nicolas Cage plays Nick Cage, channeling his iconic characters as he's caught between a superfan and a CIA agent.

Included with STARZ on Amazon for $8.99/month after trial

Watch with STARZ
Start your 7-day free trial
Add to
Watchlist
By ordering or viewing, you agree to our Terms. Sold by Amazon.com Services LLC.
Write review

Chase EReviewed in the United States on June 11, 2022
5.0 out of 5 stars
Calm down wanna be arm chair critics!
Verified purchase
It’s a great comedy people. Stop being armchair critics. Sit back. Enjoy the irony and flashbacks. And of course, the LSD trip! Love when people can make fun of themselves. Who else is gonna go watch Paddington 2?
26 people found this helpful

Kevin R ShowellReviewed in the United States on June 8, 2022
5.0 out of 5 stars
Starts off as a comedy, becomes a buddy movie, and ends as an action
Verified purchase
This movie is full of charming nods to Nicolas Cage's film career. I loved the first two thirds of the film, Very funny and wonderfully self deprecating. The last third of the film, becomes a little lost in places as it morphed into an action flick. Overall, the movie was very enjoyable and happily watch again in the future.
22 people found this helpful

Toni JeanReviewed in the United States on June 9, 2022
5.0 out of 5 stars
A MUST SEE if you are a Nic Cage fan.
Verified purchase
This was so awesome. A few times I laughed so hard i almost hurt myself. Just a wonderful funny movie that doesnt take itself -- or Nic Cage -- too seriously.
18 people found this helpful

pilatesgirlReviewed in the United States on June 26, 2022
4.0 out of 5 stars
Nicolas Cage at his best brilliantly accompanied by Pedro Pascal!
Verified purchase
Having watched the Meta series "Episodes" with Matt LeBlanc, I was definitely game for a Nicolas Cage Meta film and was not disappointed! I didn't even realize how many of his films that I've seen until they were mentioned in the movie. Whether or not you like his style of acting, Cage's charisma and incredible screen presence cannot be denied, and this movie is on par with his best. I don't think it's particularly easy to play yourself on screen, and Cage did it with aplomb.

Now I come to my favorite part of the movie and that is pretty much every scene with Pedro Pascal! Besides the brilliant chemistry that Cage and Pascal have together, Pascal matches Cage for stage presence and you can't help but like his character. I remember Pascal as the sensuously dangerous Oberyn Martel in Game of Thrones, so it was delightful to see him in a more comedic role. There was a scene with him and Cage where I laughed so hard that I shed a tear or two- I may rewind the movie and watch that scene again (it brought me joy.)

(A side note, Sharon Horgan, who I absolutely love, was just great in her small role as Cage's ex-wife!)

The movie definitely mixes genre, but it's self aware about it-and that's what I found so engaging. Many have remarked that the action scenes at the end were kind of "clunky." But, honestly I didn't mind that - I think that was part of the point - it was almost Meta within Meta - how Nicolas Cage has done so well in the box office in action role, but his best roles have been character driven.

Anyway, I thought it was fun and I recommend. :)

GoldiigrlReviewed in the United States on June 29, 2022
5.0 out of 5 stars
Clever and fun
Verified purchase
So enjoyable to watch, not even being a big Nick Cage person. He actually kind of annoys me 90% of the time. But this was funny, smart, well timed, humble and generous with self deprecating humor. I’m literally smiling thinking about scenes from this movie. The fact that Paddington 2 is woven into the story was also a selling point for my husband, who straight up loves that movie. (Yes…that’s correct!)
10 people found this helpful

NYC reviewerReviewed in the United States on June 19, 2022
1.0 out of 5 stars
Incredibly disappointing: what could have been a fun meta-film is a hack-y unbelievable slapstick
Verified purchase
This had the potential, I thought, to be an awesome meta-film (think Being John Malkovich) given that it stars two of my favorite actors; its sad reality though is that it is a cartoon-ish, clown-y slapstick, over-written, over-acted, and with a story line that is unbelievable and had me checked out after the first quarter of the film because none of the performances are actually convincing. It can't seem to figure out what it wants to be and wastes an amazing amount of talent. The few highlights of the movie can all be watched in the trailer. Ugh. Wish I could get a refund.
6 people found this helpful

Cody Tanner RushReviewed in the United States on July 4, 2022
5.0 out of 5 stars
Meta Slapstick at its BEST
Verified purchase
I usually yawn at hollywood's egotistical navel gazing, but this film, like 'Tropic Thunder' or 'Three Amigos' knows how to laugh at itself without basking in its self-awareness. It's a brilliant comedy with a a thriller backbone to carry a tightly-scripted story. One that has incredibly human dialog between Javi and Nick, the kind writers should look to as the benchmark for representing platonic masculine companionship. It's boyish without being immature; it's heartfelt without being saccharine; and it feels like a hard-earned friendship borne from an awkward place, a fan boy as eccentric and insecure as his narcissistic celebrity crush.
In an industry awash with polemical dreck about as entertaining as an anal fissure, where every story (it seems) is cannibalized by ideology, comedies are a dying breed. Let alone character-driver slapstick to rival the wackiest Edgar Wright flick. 'Unbearable Weight' is, indeed, the work of "Massive Talent".
5 people found this helpful

Michael ThompsonReviewed in the United States on June 13, 2022
1.0 out of 5 stars
Great disappointment
Verified purchase
Watch the trailer and thought it would be good. Do not buy this movie! It was just plain bad, we stopped watching it about 25% into the movie.
9 people found this helpful
See all reviews
Back to top
Get to Know Us
Make Money with Us
Amazon Payment Products
Let Us Help You
EnglishChoose a language for shopping. United StatesChoose a country/region for shopping.
© 1996-2022, Amazon.com, Inc. or its affiliates