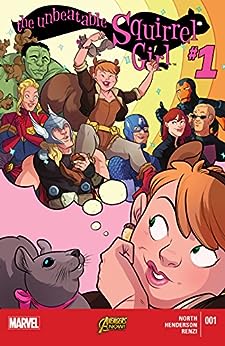 by Ryan North (Author), Erica Henderson (Cover Art, Artist), Rico Renzi (Cover Art) & 0 more Format: Kindle Edition
Book 1 of 8: The Unbeatable Squirrel Girl (2015)
See all formats and editions
Sorry, there was a problem loading this page. Try again.
Wolverine, Deadpool, Doctor Doom, Thanos: There's one hero that's beaten them all, and now she's got her own ongoing series! (Not that she's bragging.) That's right, you asked for it, you got it, it's Squirrel Girl, (she's also starting college this semester!) It's the start of a brand-new series of adventures starring the nuttiest and most upbeat super hero in the world!
Read more
Previous page
Next page
Kindle e-Readers
Fire Tablets
Free Kindle Reading Apps
Available on these devices 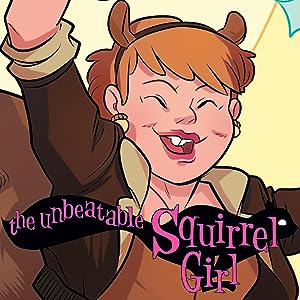 Julianne Borgardt
5.0 out of 5 stars Snarky Comedic Brilliance
Reviewed in the United States 🇺🇸 on February 23, 2015
Verified Purchase
Bought it as a gift for my friend. We both read it and loved it. Squirrel Girl is as quirky and eccentric as any other college freshmen, plus she's a squirrel, with squirrel powers, and squirrel problems. She's every bit the snarky, comedic, confident, individual character that we expected. Bravo. I would recommend this to anyone who doesn't take themselves or comic books too seriously. I can't wait to find out what happens next.
Read more
Helpful
Report abuse

Paige Roberts
5.0 out of 5 stars Coolest hero in comics today
Reviewed in the United States 🇺🇸 on February 28, 2015
Verified Purchase
Adore the story. Squirrel Girl has got to be my current favorite hero in comics. If my daughter was still little, I'd buy her a subscription to this one.
Read more
2 people found this helpful
Helpful
Report abuse

Yasser Alireza
5.0 out of 5 stars Five Stars
Reviewed in the United States 🇺🇸 on March 8, 2015
Verified Purchase
wacky and lots of fun. A nice break from the usual superhero genre.
Read more
One person found this helpful
Helpful
Report abuse

Sam Quixote
3.0 out of 5 stars Beatable
Reviewed in the United States 🇺🇸 on January 12, 2015
Few spoilers in this review so deal with it - or don’t! Nuts to you, nuts for everyone!

Doreen Green is THE UNBEATABLE SQUIRREL GIRL! She’s got a tail, the teeth, she loves eating nuts and sitting in trees, she’s part squirrel, part human - and she’s going to college! With her squirrel sidekick Tippy-Toe, she fights crime, and, in this first issue, Kraven the Hunter! But cosmic disaster looms in Squirrel Girl’s future - GALACTUS(!?!) is on the way!

First of all, I love that Marvel are putting out a comic called The Unbeatable Squirrel Girl. I’m sure I’m not the only one waiting for Marvel NOW! Black Panther, Doctor Strange, and a host of others and Marvel instead gave us Squirrel Girl. It’s a surprising choice and I respect that (and I’m sure we can expect those other titles the closer we get to their movies!).

I also know nothing whatsoever about Squirrel Girl. If you told me she was a brand new character or one from the very beginning from back when Marvel was still called Timely Comics, I’d believe you. But I love the idea of the character and the series sounds like a blast so I was sold when this was announced months ago.

Which is why I’m a bit disappointed that I didn’t end up raving about this one. It’s not a bad comic but it’s also not as amazing as I’d hoped.

I like that it’s a very upbeat comic about a cheerful main character. Doreen loves being Squirrel Girl and that’s refreshing - we don’t need another miserable origin story with a tortured superhero who grimly sets their jaw when they face their evil nemesis, blah blah blah. She’s a good person, a little naive (which makes her all the more loveable), but capable with a strong sense of right and wrong - a fine role model for kids.

And this first issue opens with a musical number too, with Squirrel Girl singing her own superhero song to the classic Spider-Man theme!

Then I noticed something that annoyed me: creator’s commentary. This is something I’ve seen in some indie titles over the years where the creators do a comics version of a commentary track, writing an ironic line or two at the bottom of each page. I hate it. I’ve hated every comic that sort of thing’s appeared in and, irritatingly, it appears in this issue.

It’s also a warning sign that the creators think they’re hilarious and, yup, pretty soon Ryan North’s script was rubbing me the wrong way with it’s “I’m so smart and funny, look at my COMEDY!” tone. I’ve only read one other North book, The Midas Flesh (which I haaaated), but I can already see that he uses this trying too hard to be witty-style in his comics and it’s not funny. Not even a bit. He doesn’t strike me as a writer with much range and he’s not that adept at the kind of writing he does produce - “humour”.

Also, North’s story isn’t very complex or even that interesting - she goes to college! And...? There’s not a whole lot to Doreen’s character or world, she’s just there. I’m not saying we needed an origin story and it’s cool that we’re getting right into it, but I don’t really know what she’s about besides beating up baddies and talking to her squirrel. Besides her appearance she seems very generic.

Then another thing annoyed me: Doreen tries to have a secret identity for no reason (she doesn’t even wear a mask!) and decides to hide her giant squirrel tail in some tight-fitting trousers. The effect? A slightly larger behind than she’d like (but still not Nicki Minaj-size). Did I mention she has a GIANT TAIL? There’s no way you can hide something that big and have practically no noticeable difference when you wear tight-fitting trousers - even baggy clothing wouldn’t work!

Squirrel Girl fights Kraven the Hunter for no reason except to show us that she can handle herself in a brawl and it gets resolved in a tedious conversation that resembles a back and forth between Marvel fanboys.

Ok, the good: I still like the character and the potential she has - this is only one issue after all. Tippy-Toe’s a great character with a strong personality - yes, he speaks, this is Marvel, all the animals talk! I even stopped once while reading to realise this was an actual comic from Marvel. Tippy-Toes?!

I liked Deadpool’s Guide to Super Villains trading cards that informs Squirrel Girl of her foes before she faces them and I like Maris Wicks’ art for them. Erica Henderson’s artwork is fine and serves the story well but it’s also not particularly exciting or dynamic - it’s just ok. And of course I liked the opening musical number. Also, just as I was finishing up the comic and wondering if I should bother continuing with this series, Galactus shows up!! Yeah I’m on board for that! I just hope Squirrel Girl doesn’t talk to him the entire time - not with North writing that conversation!

There’s plenty to like in The Unbeatable Squirrel Girl #1, especially if Ryan North’s writing doesn’t bother you. It’s certainly not bad and it’s great that Marvel continue to cater to younger readers with their new releases as well as try out characters like Squirrel Girl as stars of their own titles. In the end it’s a so-so comic that I wanted to like more and unfortunately didn’t, but I don’t think I’m the target audience either and younger readers might get more out of it.
Read more
3 people found this helpful
Helpful
Report abuse

Fenrix
4.0 out of 5 stars like Deadpool but less squishy
Reviewed in the United States 🇺🇸 on June 4, 2016
Squirrel Girl is delightfully awkward and nerdy. She shares some of the same space of geekiness as Ms. Marvel, but with much less self-awareness. And while not being self-aware, she knows where the fourth wall is, and regularly converses with it, like Deadpool but less squishy. All around fun stuff.

Also this collection included the original appearance of Squirrel Girl with Iron Man way back in the day. This story is also delightfully goofy, and inclusion in this first SG set was perfect, as there’s really nowhere else that story fits.
Read more
Helpful
Report abuse

ZadNostrom
5.0 out of 5 stars This Is The Story Of A Squirrel (Girl)
Reviewed in the United States 🇺🇸 on November 25, 2019
This is the first issue of one of the best comics to come out in the last decade. The Unbeatable Squirrel Girl is a series that is funny, smart, and heart-warming. Plus, it's an all-ages comic that doesn't talk down to its audience. Highly recommended!
Read more
Helpful
Report abuse

Mark
5.0 out of 5 stars Fun, Funny, Family Friendly
Reviewed in the United States 🇺🇸 on January 27, 2015
The Unbeatable Squirrel Girl's first issue was more or less how you expect it to be: fun and nonsensical. It is a semi-introductory issue, it doesnt go into much of her backstory but it does give you a run down of her powers and motivations. The issue itself is family friendly and I believe the series is supposed to stay that way for the most part.

The best parts of the issue were the humor, which is unsurprising considering it was written by Ryan North. And I also enjoyed the inventive way Squirrel Girl handled the crisis that appeared in comic. Lastly, I like that they are starting to build a supporting cast for Squirrel Girl.

The only thing I didn't particularly enjoy is the art. That is likely just personal preference and given the tone of the book the art doesn't distract too much. I just personally prefer more realistic art.
Read more
One person found this helpful
Helpful
Report abuse
See all reviews
Report an issue
Does this item contain inappropriate content?
Report
Do you believe that this item violates a copyright?
Report
Does this item contain quality or formatting issues?
Report