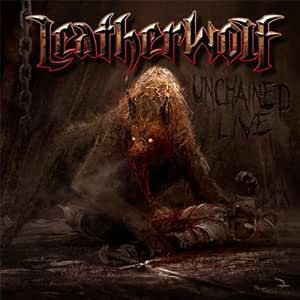 Add to Cart
$37.26
+ Free Shipping
Sold by: Amazon Global Store UK
Have one to sell?
Sell on Amazon

'Unchained Live' is the brand new 2013 LEATHERWOLF album, featuring classic cuts from the band's 4 studio releases, along with a studio re-make of 'Black Knight'! Engineered by Michael 'Kramarica' Kramer, mixed by producer extraordinaire, Roy Z (JUDAS PRIEST, BRUCE DICKINSON, SEPULTURA, HALFORD), and mastered by Tom Baker (QUEENSRYCHE, JUDAS PRIEST, SEBASTIAN BACH), with artwork by noted conceptual designer Martin Deschaumbault ('Assasin's Creed') and Marc Sasso (DIO, MANOWAR, ROB ROCK). Line-up: Michael Olivieri - vocals, guitar Rob Math - guitars Greg Erba - guitars Pat Guyton - bass Dean Roberts - drums Reviews: 'Leatherwolf aren't here to fuck around, okay? They plug in, put a foot up your ass for nine songs, then leave you broken, bruised, and wanting more.' - Damian J. Cousins, KNAC. 'The likes of 'The Calling' and 'Wicked Ways' have quite simply never sounded better, whilst 'Hideaway' and 'Street Ready' itself reel back the years effortlessly to provide some pleasingly extrovert nostalgic neck-flexing nirvana.' - Scott Adams, Metal As Fuck 'This is one hell of a live CD. If you're a fan of Leatherwolf then this is an absolute must buy!' - Darrell Finley, Blast Magazine 'That unmistakable sound is still there and brought back to life brilliantly on this superb live album!' - Shan Siva, Battle Helm 'This is the sound of a confident band, having a blast, playing the old favorites and giving the fans exactly what they want. In short, it fuckin' rocks and boy does it have a bite!' - Matt Phelps, Über Röck ''Unchained Live' is 45 minutes of high-energy classic metal that is sure to please bangers everywhere.' - Bruce Moore, Pure Grain Audio ''Unchained Live' is a superb reminder of just how good Leatherwolf were and obviously still are and will undoubtedly strike a chord with anyone with even a passing interest in US Heavy Metal of class and distinction.' - Steven Reid, Sea of Tranquility 'The current lineup is tight, and Olivieri's potent voice has held up well. It's a good stopgap album as fans await a new studio release.' - Chad Bowar, About.com ''Unchained Live' is a great appetizer for fans of the band that are waiting for their new record or for new fans such as myself to get acquainted with such an amazingly underrated band.' - Daniel Silva, Metal Temple.

BRIAN'83
5.0 out of 5 stars This is the reason you or anyone, became a ...
Reviewed in the United States on August 5, 2015
Verified Purchase
This is the reason you or anyone, became a Leatherwolf fan, to start with! The triple-axe attack leaves little to be desired/Michael Oliveri's voice has held up well-compared to the inital content/Dean Roberts is a beast on the skins/And the songwriting of Geoff Gayer still has a power & flow....minus his abscense. Leatherwolf has been known as a live band, and it's a show I'd still pay to see. Although not a "Perfect" live album; the nostalgia & metal are hard to beat; from this unique, mystic, Sunset strip band.
Read more
One person found this helpful
Helpful
Comment Report abuse

Mark S. Sundermeier
4.0 out of 5 stars Good disc...but not necessary
Reviewed in the United States on June 8, 2014
Verified Purchase
Honestly, I am huge fan of the band and went and saw them last year...Mike's voice is EXACTLY the same! Besides him and Dean (the drummer) the rest of the band IS new...not sure why?!?!? THis "Live" disc IS kick-ass...sounds great and is executed well...BUT..."Open Wide" (another live disc with the original line-up put out a couple of years back)...has all of these tunes...and about 10 others...find that one!
Read more
One person found this helpful
Helpful
Comment Report abuse