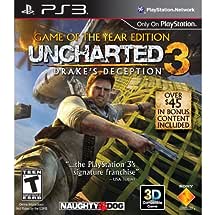 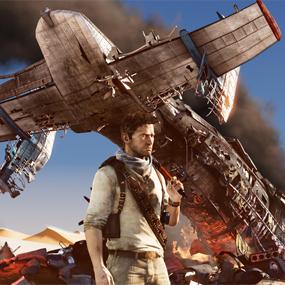 A search for the fabled "Atlantis of the Sands" propels fortune hunter Nathan Drake on a trek into the heart of the Arabian Desert. When the terrible secrets of this lost city are unearthed, Drake's quest descends into a desperate bid for survival that strains the limits of his endurance and forces him to confront his deepest fears.

4.5 out of 5 stars
4.5 out of 5
683 global ratings
How are ratings calculated?
To calculate the overall star rating and percentage breakdown by star, we don’t use a simple average. Instead, our system considers things like how recent a review is and if the reviewer bought the item on Amazon. It also analyzes reviews to verify trustworthiness.
Top reviews

Lance & Amy
4.0 out of 5 stars The best the gameplay has been, but the story lacked punch
Reviewed in the United States on March 26, 2014
Verified Purchase
After being thoroughly disappointed by the first Uncharted and thoroughly impressed by the second, I was prepared for pretty Uncharted 3. What I got was far and away the best gameplay of the series, but a story that did not quite feel as epic as the second.

The single best part of Uncharted 3 is the improvement to use of the platforming elements. The mantra of the first two games in this series may as well have been, "Why walk through a door when you can back-track 30 feet, drop down two levels to shimmy around the side of one building to climb up four stories to swing back down three levels just to get to the other side of said door?" It was annoying, time consuming, and greatly disrupted the flow of the game. All of the platforming seems to have a purpose in Uncharted 3. It isn't just there because it can be. You also don't have the long, boring missions where it seems like all you do is jump, climb, and shimmy for 45 minutes. I can't stress enough how much I appreciate this change.

The graphics are improved over the already impressive Uncharted 2, the weapon variety is greater, and they feel even slightly better than UC 2. The combat is improved and a bigger part of this game. This is both a good and a bad. When just fighting one person, it works pretty well. When fighting a larger group, it feels pretty ridiculous. Think the combat system from the Arkham games, but instead of being Batman with his free flow combat, gadgets, and fighting animation variety, Drake has like 3 moves that you'll see over and over through the fight.

While still solid, the story for UC 3 lacks the punch of UC 2. This could just be a matter of personal preference, but I never found myself as emotionally involved in this game as I did UC 2. The Sully-Nate origin story was interesting, but I didn't feel like it carried the middle of the game very well. Also, in UC 2, I thought I was near the end when I reached the mid-point, and I couldn't believe how much game I still ended up having left. With UC3, I couldn't believe it was over. I'm not sure if this is because the game was significantly shorter, paced that much better, or just moved so much quicker when you were not swinging around like a monkey all the time.

Overall, I would call UC3 the most fun to play of the trilogy, but the story lacked the punch of UC 2. Had the UC2 story been paired with the UC 3 gameplay, this would have moved the game from great to near perfection.

S.T.A.L.K.E.R
4.0 out of 5 stars Good Shooter but not Without Faults
Reviewed in the United States on December 9, 2013
Verified Purchase
This is a game that I felt immersed in and found the the gameplay mechanics worked great 90% of the time and I had a lot of fun throughout with some hilarious moments sprinkled in. The reason for the four stars out of five is because the shooting mechanics felt floaty, I do not like it when guns are inaccurate and this is what this game often does. While I have shot guns in real life and know that it is difficult to hit a target let alone a moving one. However,a pistol shot to the chest from 50 feet away should not miss. I feel like I can see where Naughty Dog wanted to take the shooting mechanics,going for the more realistic handling model but it did not click with me, especially in a game that is so full of humor it does not feel like a good match. Then there is the enemy variety, which is lacking to say the least. You will be shooting similar grunts fighting several brutes and then after a while some beefed up demon soldiers. This however made for rather dull gameplay at times with the harder portions of the game throwing numbers at you, versus different tactics from different types of AI. The enemies, however, do a great job navigating the environment and will often flank you adding to the tension, which kind of makes up for the lack luster combat. The gameplay overall, however was very satisfying, with fluid animations, and a solid melee system that encourages you to get in the middle of a group and start a brawl. The pacing of the combat/exploration/puzzles was done expertly as per Naughty Dog standards. I was also blown away by the beauty of the environment, it was rich in detail and had a fantastic art direction that feels just right. This is a great package and worth every penny, but far from perfection.
Read more
2 people found this helpful
Helpful
Comment Report abuse

Kasaru
5.0 out of 5 stars One of the greatest games ever made
Reviewed in the United States on November 22, 2013
Verified Purchase
Uncharted is by far my favorite gaming franchise, almost single handedly due to Uncharted 2. Uncharted 3 keeps up the momentum, but in my opinion, isn't quite as spectacular of an experience as Uncharted 2. That's not to say that Uncharted 3 isn't a great game, because well, it's not. It's is a FANTASTIC game! Naughty Dog's PlayStation career has been one of the best to have experienced! The Last of Us is PS3's greatest last hurrah! One of the greatest games ever made! Uncharted 3 is up there as well. Naughty Dog has truly come to be one of the best at what they do. The Uncharted series is the pinnacle of Video Game Art, and I am very happy to include Uncharted 3 within my vast library of games, and to hold it easily within my top ten favorite games ever. I am even more happy that all of Uncharted 3 Game of the Year edition has all of the DLC on disc! If I don't stop now, I'll go on forever. Just know that if you have a PS3, you owe it to yourself as a gamer to experience Uncharted.
Read more
One person found this helpful
Helpful
Comment Report abuse

splashlog
4.0 out of 5 stars very very good and fun
Reviewed in the United States on July 16, 2014
Verified Purchase
not going to comment on the online stuff. excellent graphics, story, and music. the gameplay is fun. theres lots of good balance in the game. not super long. you can scour the battlefield for the types of guns u prefer and theres ample ammo so you dont have to be stingy, the puzzle elements arent to bad. there was a puzzle in chapter 6 that made me put the game down for a few months while i played other stuff. i came back and googled it and finished the game in 2 long gaming sessions after that. theres 1 or 2 other annoying puzzles that google can solve. the ai will 1) overwhelm you by numbers sometimes 2) you can just go up an melee them or find cover to counter this 3)their idiots about 20% of the time. the jumping and platforming is great,responsive, and only annyoying a few times. not as good as assasin creed jumping but close. 4.5 stars for me. definetly worth playing
Read more
One person found this helpful
Helpful
Comment Report abuse
See all reviews

Michael MacDiarmid
4.0 out of 5 stars Very difficult to get a perfect score being the follow up to Uncharted 2
Reviewed in Mexico on January 23, 2017
Verified Purchase
Make no mistake, Uncharted 3 is a fabulous game; however, after Uncharted 2, the bar was obviously going to be too high. Story mode, albeit brief, is enjoyable and provides a nice glimpse into the Nate-Sulley relationship that will make you love both chaps even more. All the extras this edition provides for the online section of the game are well worth the price (or, as in my case, the wait) and will help trophy hunters out there accomplish a highly challenging 100% that will require loooads of online play. It is precisely that online play that prevents this from being as good as its predecessor. In my opinion, competitive matchmaking had never been so broken and the simplicity of Uncharted 2's multiplayer is sorely missed. For instance, the throw-back ability now makes granades less valuable assets, and power ups can make a particular player unbearable. It is also not gratifying to be dropped into a match halfway through when your team is doomed already. The one aspect in which I think this game improved over the second installment is cooperative matches.
Overall, this is a great purchase as the Uncharted 2 multiplayer is emptier by the minute; however, do prepare yourself for some new frustration.
Read more
Report abuse

S. Herar
5.0 out of 5 stars Excellent game in the Uncharted franchise
Reviewed in Canada on January 20, 2016
Verified Purchase
Excellent game in the Uncharted franchise. about as long as the first one but Naughtydog expands Nate's universe and relationships, and more importantly his fighting moves. Haven't finished the game yet but love everything about it so far!!
Read more
Report abuse

Jake
4.0 out of 5 stars Not long enough
Reviewed in Canada on April 17, 2013
Verified Purchase
For a game that is unique as Uncharted and playing the prequals, a game that i wish would last longer, hordes of enemies at certain times in the game almost to a frustrating point, not near as hectic as Call of Duty with the right amount of puzzles and beautiful scenery, wish it was longer. Good game. See you on the next gen consoles.
Read more
Report abuse