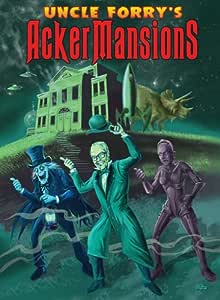 Uncle Forry’s Ackermansions Documentary DVD Famous Monsters of Filmland Forrest J Ackerman Forrest J. “Forry” Ackerman was a fixture in the science fiction and horror scene for as long as anyone can remember. Having picked up a sci-fi magazine as a nine-year-old boy, the stage was set for a lifetime of passion for the subject. Starting a sci-fi club led to writing one of the genre's first fanzines. Getting to know writers and artists in the field landed Forry work as a literary agent and he began amassing one of the world's largest collections of fantasy material. A meeting with James Warren would turn into a pop culture- changing event as Forry was asked to head a new magazine and “Famous Monsters of Filmland" was born. He started opening his house to the public in the early 1950's, a tradition he would carry on through three Ackermansions up until 2008. His collections were stuffed to the rafters in every nook and cranny, leaving visitors to wonder where there may be living space. “Uncle Forry’s Ackermansions” tours us through all three of his homes. You'll see: Memorabilia Including 300,000 Books Original 1933 "King Kong" Props Original Ray Harryhausen Props Forry’s "Metropolis" Maria Robot Bela Lugosi’s Vampire Cape Lon Chaney, Sr.'s Makeup Box Dracula Signed by Bram Stoker and Famous Horror Stars Frankenstein Signed by Mary Shelley Rare Interviews with Forry by Bob Wilkins ("Creature Features" Host) Video and Photographs Seen for the First Time In the welcoming spirit of Uncle Forry, you are invited! 70 Minute historical footage photos and interviews. DVD extra photos of the Ennis House “House on Haunted Hill”.

dressed in black
5.0 out of 5 stars An amazing tour, but I wanted to see more detail of Ackerman's incredible collection
Reviewed in the United States on November 9, 2017
Verified Purchase
Forrest J. Ackerman was the Ultimate Fan of the fantastic and his amazing collection would include, actual movie props, 300,000 books, one of three of Bela Lagusi's Vampire Capes, Lon Chaney's makeup box, Dracula, signed by Bram Stoker and Famous Movie Stars, Frankenstein signed by Mary Shelley, Masks, Art and other Memorabilia. He was the head of Famous Monsters of Filmland, which would go on to influence all your favorite Make up Artists, Directors, Writers.and all his.fans. He opened up his three AckerMansions to the public until 2008, occasionally losing items to the public pocketing his much beloved collectibles. In his early years he would dress as his favorite characters at conventions, years before what we now know as cosplay. He would have 50 stories published and be featured in 210 SCI-Fii and Horror Films. He would die at his home one minute before Midnight on December 4th, 2008 at the age of 92 He had a chance to say goodbye to everyone he wanted to. He encouraged fans to send goodbye letters by mail. He is buried in Forest Lawn Memorial Park (GLENDALE).with his wife. His plaque reads, "SCI-Fi WAS MY HIGH".
First seeing his collection in photos, he influenced me to start a horror collection of my own. However, his 3 Ackermansions are so packed, I desperately wished for a second disk with a slideshow chronicling his massive catalogue. But, I know this would be an impossible feat.
For a personal tour, through the golden years of horror and science fiction, I highly recommend this dvd.
On the dvd extra, his mini mansion was located right below The Ennis House, from House on Haunted Hill! Now that was dedication!

Horror Movie Fan
5.0 out of 5 stars A must see for any Famous Monsters Of Filmland Fans
Reviewed in the United States on January 19, 2016
Verified Purchase
I really enjoyed the content of this DVD. The only problem I experienced was the audio was a little annoying. During the parts with the classical music, I had to turn the volume down because it was extremely loud and distorted. If you are a Famous Monsters of Filmland fan, this is a must see!
This holds special meaning to me because I grew up reading FM, and was lucky enough to have my Picture published in the "Wanted More Readers Like" section in issue #113. I also visited the Ackermansion in 1997. I got some very cool footage of Uncle Forry on my visit. So this DVD was special to me and would be to any other FM fans.
Read more
2 people found this helpful
Helpful
Comment Report abuse

Paul G
5.0 out of 5 stars The grand tour......and then some.
Reviewed in the United States on March 18, 2015
Verified Purchase
I believe there was a CD ROM that came out a few years back that gave an ultra-detailed tour of "Uncle Forry's" legendary collection. I never saw that CD ROM, but this DVD has to be the next best thing. I always fantasized about visiting the "Ackermansion" and almost got my wish when I visited L.A. back in 1994, but alas, when I rang Forry's number his assistant informed me that Forry was away that particular weekend, attending a convention somewhere, and that it would not be possible to tour the mansion. Drats!!!! So this DVD goes at least in some small way to fulfilling that long held dream. Recommended.
Read more
5 people found this helpful
Helpful
Comment Report abuse

Skip
5.0 out of 5 stars Great memories of a monster filled childhood.....
Reviewed in the United States on June 17, 2015
Verified Purchase
I am what is known as a "monster kid" from the late 1950's through the 60's and collected Forry's Famous Monsters Of Filmland, Spacemen, and Monster World magazines so this video presentation of the wonders contained in his "Ackermansion" of science fiction, horror, and fantasy memorabilia was a joy to behold and would highly recommend this DVD to anyone else interested in the genre.
Read more
2 people found this helpful
Helpful
Comment Report abuse