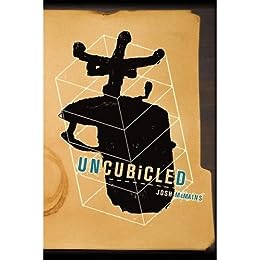 by Josh McMains (Author) Format: Kindle Edition
See all formats and editions
Sorry, there was a problem loading this page. Try again.
First half of the original, higher-priced novel.

**Warning: reading this book may endanger your co-workers.**

Joe Tompkins was having a bad day at the office: boring meetings, pointless assignments, and this feeling that he was being watched. When he could take no more, he did what anyone would do. He knocked out a co-worker with a keyboard and escaped.

From cube-dwelling author Josh McMains comes a dark comedy that brings conspiracy back to corporate America. Uncubicled follows the drastic series of events that would take one man from his mid-level desk job to an elaborate getaway from the long arm of the law—and perhaps something even more sinister.

Along the way, Joe crosses paths with former friends whose destinies have been intertwined from the start. Joe encounters mystery, adventure, and car trouble as he struggles to find out what he was always meant to do and who, exactly, wants him dead.

And you thought YOUR job sucked.
Read more
Previous page
Next page

My Name
3.0 out of 5 stars 2.5 out of 5, had potential-starts off strong but part 2 fails to deliver
Reviewed in the United States 🇺🇸 on March 23, 2011
Verified Purchase
The Good:

1. Part 1 really flies along, grabs you and takes you along for the ride
2. Captures the alienation & bitterness of corporate cubicled life humorously well (in the first couple of chapters)
3. Pacing is good in Part 1
4. Premise, plot, characters are interesting, intriguing enough that you're wondering what will come next (until you get to part 2 when you pretty much stop caring).

The Not so Good:

1. Part 1 / Part 2? come on. A truly good, entertaining read doesn't need to play these kinds of games. I know right now the indie authors are playing the pricing game. But this splitting up of one book into two feels almost like a dishonest practice. First of all...Once you get into part 2 you realize that the book is just too long to begin with. Second of all, you realize that Part 1 was the stronger of the two...which explains why there are no ratings allowed for part 2. I feel cheated.

2. Creative Writing 101-I suspect, and I haven't had time to meticulously comb through the reviews and author info, that this was a novel that started its life either in a creative writing class or in some kind of workshopping environment. There's a wealth of clumsy writing here that you can easily overlook as long as the story is propelling you along. Once things slow WAY down in part 2 it's more difficult to overlook.

3. Get an Editor-or more than one. Have all your trusted friends (the ones who will tell you the truth) read your work before you up & publish it. This work had potential. Interesting characters, unpredictable plot twists, but needed a whole slew of cleanup. There was WAY too much character backstory in a lot of places. Much of it too descriptive and self indulgent. Just because you have to develop your characters backstory for the sake of mapping your book, doesn't mean that every thought you have about each character needs to make it into the finished book. Just because as an author you come up with a great metaphor or simile does NOT mean each and every one deserves a place in the published work! There were clearly passages that should have been cut but you could tell the author was just too attached and needed the detachment of a editor to trim things down, clean things up, streamline, clarify. There were also places that clearly needed to be rewritten or reorganized for clarity or pacing's sake. What I ended up spending six bucks on ended up reading like a really great 2nd or 3rd draft but NOT a final product. I'm tremendously glad that authors have direct access to platforms with which to self publish. But with wider access come more mediocre work. The potential here was clear...but it didn't make the leap to being a truly good read.

4. Part 2 just plain sucks. Nearly half of part 2 is focused on one thing, continuously. All of a sudden the pacing changes and it's jarring, disruptive, and quite honestly boring for the reader. There are tons of interesting ideas here that needed to be teased out, perhaps for another book. But Part 2 simply devolved into a furious storm of writing and just about no editing. You stop caring about the characters and just want to get to the end. It's really in Part 2 that the lack of a guiding hand is really apparent, much more so than in Part 1, which has its own share of clutter and clumsiness.

5. Use of the word female--Throughout the book the women are referred to as females which in the context of the writing was weird and slightly disturbing. If this was a calculated use of a word to denote the awkwardness of certain characters it shouldn't have been used across the board & applied to ALL the female characters.

I find it really unfortunate I didn't have more positive feedback but this is obviously one of the challenges independent authors face-without the resources and experience of established publishers, indie authors are left to go it alone when it comes to editing and too often it results in inferior work.

I think there's enough potential in the author that, should he publish something else, I'd probably pick it up because if he keeps writing he'll no doubt improve, but not if the work's chopped up again into multiple parts.
Read more
3 people found this helpful
Helpful
Report abuse

John Goerzen
3.0 out of 5 stars Very suspense-filled, but disjointed
Reviewed in the United States 🇺🇸 on May 12, 2009
Verified Purchase
Uncubicled starts out with one of the best beginnings of any book I've read. It's hilarious, totally predictable in places, and completely UNpredictable in others, and the mystery starts from the very beginning.

The book is thoroughly gripping, and usually hard to put down. Plot twists and turns abound, and a fair number of jarring revelations occur. There is humor, too, especially in the first third of the book.

The book has a nonlinear timeline. At times, this is made somewhat explicit: "Monday 5PM" might occur earlier in the book than "Monday 2:13PM". At times, it is less explicit. It's an interesting device, but overused. I found myself almost wanting to take notes sometimes: I'd pick up the book, see a chapter number and a random time staring at me, and have to flip back to prior chapters to compare timestamps to see where this fit in to the chronology.

As the book progresses, these jumps in place and time are often used to introduce the backstory of a character. At first, that was interesting and sometimes even heightened the suspense. But by the time we shifted from a gripping scene to suddenly a farm in Indiana some hours earlier, it has passed from interesting, through annoying, all the way to downright frustrating. I usually took my cue to stop reading Uncubicled at those points, instead of staying up later into the night to find out what happens as I would have otherwise. It was too annoying to be ripped out of an engaging plot for awhile, frustrating at having to keep the chronology straight in my mind. Though I can't deny it was an effective and interesting device at times, it was just overused.

I found the ending a real letdown. I'm not one of those people that tends to enjoy a book where you think everything has been resolved, and then on the last page or two suddenly realize that it hasn't. I would have been happier if it ended before the epilogue. As it is, I feel like I'm being suckered into reading the sequel. Which I will probably do anyway, though with less enthusiasm than if I hadn't been suckered into it. And I say that even though a sequel doesn't exist yet. It feels THAT strongly.

In all, it feels like one of the recent James Bond movies: so action-packed, time- and place-shifting, that it holds your attention, but never lets you really figure out what the story even is until later. I'm not sure I really like that.

But, I've got to say this: the author strikes me as a really interesting guy. Josh has some novel ways of promoting the book and making his entrance into the world of publishing. I hope he continues writing, continues working in unconventional ways. Although I'm not giving this an entirely glowing review, I think it *is* a promising first novel for Josh. I hope he keeps at it, and I look forward to reading his future work.

As to the rating: at the beginning of the book, I thought I'd be giving it 5 stars. By the time I got to the end, it was a debate between three or four. I initially gave it a 3, but after thinking about it, I'd rather give it a 4... but Amazon won't let me change that.

One other comment: the Kindle version had somewhat odd formatting. There was no indication of a new paragraph: no indentation, no line breaks. It made it hard to read at first, though I adjusted by the end. Still, that ought to be fixed.