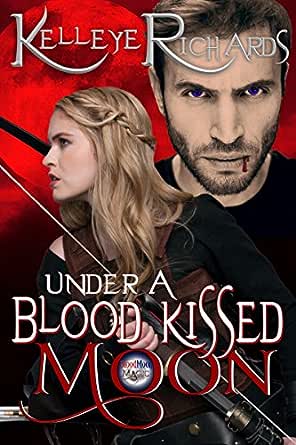 You've subscribed to BloodMoon & Magic! We will preorder your items within 24 hours of when they become available. When new books are released, we'll charge your default payment method for the lowest price available during the pre-order period.
Update your device or payment method, cancel individual pre-orders or your subscription at
Your Memberships & Subscriptions
There was an error. We were unable to process your subscription due to an error. Please refresh and try again. 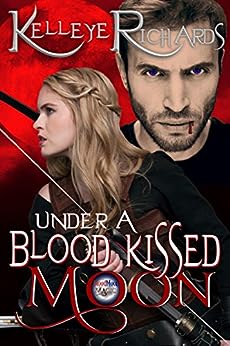 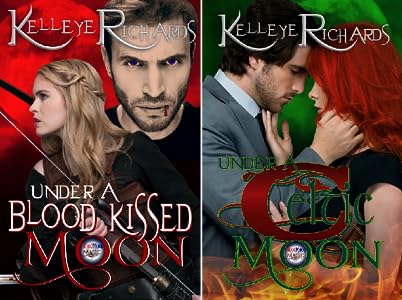 Reviewed by Michelle Randall for Readers' Favorite
Ember may be a shifter, but she was raised by vampires, and her family is everything to her, which is why she is at an illegal shifter fight. Patrone has threatened her family if she doesn't fight for him, and Ember will do anything to keep her family safe. Tonight's fight is going to be different. Ember can feel it in the air, there is a different scent in the air, something is going on. Thoren hates shifters, and who can blame him? A rogue set of shifters murdered his family and he has vowed revenge, but there is something different about Ember that unsettles him. Under a Blood Kissed Moon is the story of a vampire, Thoren, bent on killing all shifters for the mistakes of those few that destroyed his life and family, and Ember, a shifter raised by vampires, but something completely different than what Thoren was expecting, and he isn't sure how to handle it. Author Kelleye Richards is actually the writing team of authors Anya Kelleye and ER Richards, and they have taken a role playing exercise and developed it into a full book series.

Under a Blood Kissed Moon is the first book in the BloodMoon and Magic series, and it brings vampires, shape shifters and witches together on a wild journey. A unique angle in this book is that Kelleye Richards gives vampires the ability to shape shift as well. This is the first time I have read a book in which a vampire can also shape shift. I found that to be interesting and different, setting it apart from all the other paranormal books out there at the moment. This is definitely an adult novel as there is some sexual content, some violence, fated mates, bonded mates, and even childbirth. Many of these topics most teenagers know about, but I like to warn readers so that no one is caught off guard or offended. This is a paranormal book that doesn't follow the rules of all the other,s and makes you want to read it and future books.

Kelleye Richards is a collaboration by Anya Kelleye and E.R. Richards. These two ladies met while role playing for one of their favorite book series. Branching out their role play, they decided to bring to life their own characters. Thus, Ember and Thoren were born. These two aren’t the only characters clamoring for existence. More will follow in the BloodMoon & Magic series. So dive in and be immersed in their world of vampires, shifters, witches and all things paranormal. --This text refers to the paperback edition.

Caren Davis
5.0 out of 5 stars Smoking Hot Fast Paced Read!!!!
Reviewed in the United States on February 29, 2016
Verified Purchase
Under a Blood Kissed Moon is an exhilarating paranormal romance with the added bonus of being a scorching hot erotica. Kelleye Richards has done an amazing job with their first book. It will have you wanting more right from the beginning. I can't wait for the next book!!!!

I adored Ember's saucy personality and Thoren's all male ALPHA will have you drooling. The surrounding characters are incredible well done and I see the start of an amazing series! I honestly don't know what I enjoyed more the fast paced action or the smoking hot sex scenes. Not to give anything away but there is one scene near a waterfall that is so hot I read it THREE times.

This is one of my must reads of the year!!!

I received a copy of this book from the authors for an honest review but to be completely honest I had already pre-purchased the book I just wanted a chance to read it early.
Read more
One person found this helpful
Helpful
Comment Report abuse

Linda I Adams-Ackerson
5.0 out of 5 stars Vamps and Shifters - Soul Mates or Soul Enemies?
Reviewed in the United States on March 4, 2016
Verified Purchase
Thoren de Lucien and Ember McGillivrey-Scott meet under deadly circumstances. He's a vamp out for revenge, she's a snow leopard shifter forced to fight for the evil shifter Patrone. Thoren discovers Ember in one of Patrone's illegal fighting areas. His first thought is to kill her and all the shifters. But something stays his hand. The two form a rocky relationship that shakes them both to their cores. Will love be enough to keep these two star-crossed lovers together or will Patrone's evilness keep them apart forever. I loved the book. I has a lot of surprises and twists. It is heart-wrenching and violent, heart-warming and peaceful, it is life and death. It is a good read if one can keep their outrage and passions contained long enough to get to the end.
Read more
One person found this helpful
Helpful
Comment Report abuse

Sissy
5.0 out of 5 stars Fabu book with smoldering heat, action and enough suspense to keep you entranced from cover to cover.
Reviewed in the United States on March 3, 2016
Verified Purchase
The dynamic duo of Kelleye Richards knocked this first book right out of the ballpark.
Thorens every girls dream in a hero. Sexy and OMG I can imagine that accent.

Ember's a sexy little smart mouth who made me laugh with off the wall retorts.

What I love most is how even tbough the book is completed their character's are still thriving on facebook and more exciting endeavors are promised for the future.
Who is Luna? Exactly what happened to Thoren's sister? And who is Embers father?
I can't wait to read more.
Thanks Anya and ER for a great read and a promise for more. ~'~SMR ~'~
Read more
One person found this helpful
Helpful
Comment Report abuse

JReader
4.0 out of 5 stars Paranormal Delight
Reviewed in the United States on March 15, 2016
Verified Purchase
Well written, great first novel for this duo. It is a different, refreshing take on paranormal.
My only issues are few - and a personal choice. Ember gets to be too obnoxious with her cuteness. Thoren is alpha to the point that he can be annoying. Made me want to knock his fangs down his throat - but then perhaps that's because his character is well written.
Please do us a favor and shorten the next one? Not a story to be read on the go, and requires a lot of gray matter to remember what's been going on if you put this book down.
With all that Ilook forward to the next installment in the series.
Read more
Helpful
Comment Report abuse

C Randolph
5.0 out of 5 stars Great Debut Novel!
Reviewed in the United States on May 18, 2016
Verified Purchase
What can I say about a growly, fangy hero and a cute, playful heroine? I can say they make a great couple! I loved these two right off the bat.This book is very character driven, so I could feel for them from the beginning of the book. The story is very hot and steamy, so if you love paranormal romance with lots of heat, this book is for you! It's amazing how good this is for a first book.
Read more
Helpful
Comment Report abuse

Renee
5.0 out of 5 stars Love it!
Reviewed in the United States on July 25, 2016
Verified Purchase
Please write more about ember and thoren. I love these two and their story. I can't wait for more. *smiles*
Read more
Helpful
Comment Report abuse

Ember McGillivray-Scott is a beautiful, snarky, snow leopard shifter whose has been raised by sexy Scottish vampire brothers Daegan and Kael Scott after her mother passed away after giving birth to Ember. Daegan and his mate, Ahnya, and Kael have always been her family and Ember will do whatever it takes to protect them, and to keep what remains of her birth family from discovering where she is.

Thoren de Lucien is a delicious, brooding, French vampire, whose life goal is to cleanse the world of shifters, whom he blames for the deaths of his entire family. He is very close to catching the one he believes is responsible for the demise of his parents and sister, but one small thing stands in his way. Ember McGillivray-Scott. After decades of searching, Thoren comes upon an illegal shifter fighting ring run by a ruthless man known only as Patrone. As he attacks the shifters in his attempt to get at the ring leader he runs headlong into a shifter he is strangely drawn to. He cannot bring himself to kill her or to see her harmed by anyone else. As his arch enemy escapes yet again a new battle begins for him, one between his head and his heart.

The chemistry between all the characters is amazing, but between these two main characters it is explosive, and the fireworks start the minute they meet. The story unfolds in subtle waves that had me laughing one minute and crying the next. The humor is smart and sassy from all of the characters and you will truly feel all of the emotions that unfold throughout the story. The writing is straightforward and concise and will grab your attention from the first paragraph through to the last. I found this to be the strongest beginning to a series that I have ever read and I can’t wait to see where it all goes. Well done, Kelleye Richards, I am a fan.
Read more
One person found this helpful
Helpful
Comment Report abuse
See all reviews

Nettie
5.0 out of 5 stars A must read!
Reviewed in the United Kingdom on March 8, 2016
Verified Purchase
Wow. Just wow. Great characters, super hot romance and lots of action in this book! Can't wait for the second instalment in this series. Very much looking forward to more from these guys!
Read more
Report abuse
See all reviews