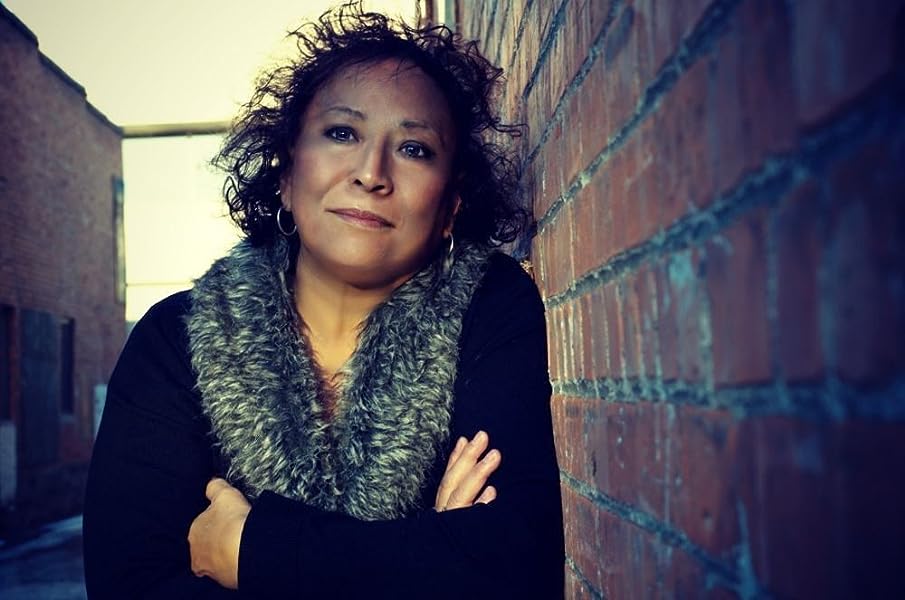 by Patricia Santos Marcantonio (Author)
4.8 out of 5 stars 10 ratings
See all formats and editions
Sorry, there was a problem loading this page. Try again.

Guadalupe, New Mexico is usually a pretty quiet town. That is until everything starts going to hell with a series of bizarre murders. Not to mention, a demon gives birth at a park. A boy disappears in the middle of a swimming pool. Rattlesnakes invade the town. Asked by his best friend the sheriff to assist in the investigation, Prosecutor Matthew Riley suspects a high-end resort development is at the heart of the crimes. But he also discovers a conspiracy of the living has opened the door for an ancient evil seeking revenge for old and new betrayals that threaten his own family.

Patricia Marcantonio was born in Pueblo, Colorado. She has won awards for her journalism, short stories and screenplays.

"Red Ridin' in the Hood and Other Cuentos" has earned an Anne Izard Storyteller's Choice Award; and was named an Americas Award for Children's and Young Adult Literature Commended Title, and one of the Wilde Awards Best Collections to Share; with recommendations from Bulletin of the Center for Children's Books.

BKSchroeder
4.0 out of 5 stars Truly Scary
Reviewed in the United States 🇺🇸 on October 29, 2022
Verified Purchase
A genuine horror story set in a remote part of New Mexico, this one had plenty of gore, along with sympathetic main characters and a puzzling storyline with a satisfying conclusion. The author’s descriptive skills were evident, as was her detailed knowledge of forensic procedures. Kept me turning pages to find out how it ended. Truly scary, too.
Read more
Helpful
Report abuse

R. Shaughnessy
5.0 out of 5 stars Death Comes for the Arch Villain
Reviewed in the United States 🇺🇸 on August 17, 2022
Latin America’s footprint dominates the Western Hemisphere, sprawling over 33 countries and a clutch of southwestern states. The region sustains about two-thirds of the hemisphere’s people along with their rich cultures and storytelling traditions. While Latin American literature doesn’t hold a monopoly on depictions of magical realism, it claims ownership of some of the greatest contributions to the form in the works of Isabel Allende, Jorge Amado, Jorge Luis Borges, Juan Rulfo, Gabriel Garcia Marquez, and others.

In Under the Blood Moon (2022, Dark Ink Books), Patricia Santos Marcantonio delivers an accomplished contemporary thriller of the American Southwest aboil with mysticism and gritty realism. At first glance her fictional town of Guadalupe, New Mexico may seem far removed from Garcia Marquez’s Macondo or Rulfo’s Comalo, but as Marcantonio’s tale unfolds, the town earns a place in the canons of Latin American magical realism.

From the outset we learn something is amiss in the civic life of Guadalupe, which resembles any of a handful of cities scattered across the valley floors of northern New Mexico. It has an old central town square, quiet neighborhoods, diners, dive bars, a county courthouse and high hopes for a shimmering new resort development just north of town. Guadalupe’s inhabitants are a combination of old Spanish and indigenous families along with newer, whiter and more affluent neighbors, several of whom are conspiring to transform the area into a Sedona-like destination. And then there are the spirits, withering entities whose claims to a certain pristine slice of high desert predate those of anyone who has ever known concrete, steel or glass.

Nothing in Guadalupe is quite as it seems. Marcantonio’s protagonist, District Attorney Mathew Riley, carries a name and complexion that would be at home in South Boston, but a back story true to the region’s mesas and arroyos. To close friends and his mother, he is Mateo, the overachieving hometown boy, raised by a single parent after having been abandoned by ne’er-do-well Riley senior.

When we first meet Riley, he is triumphant but in a ridiculed way, winning a jury trial over a pathetic cattle thief in a case that should never have gone to court. It may be his last court appearance as DA. Ambitious and tired of the small time, he has accepted a job in the state attorney general’s office in Albuquerque and is working to clear his desk ahead of the appointment of his handpicked successor. Despite his high-minded nature and incorruptible profile, he is also about to relegate his own son to life in a single parent household, this one headed by his estranged wife. That wife, an indefatigable journalist who writes and shoots photos for the local daily, is entwined in every aspect of Riley’s life and as weird occurrences evolve under the blood moon of the book’s title, the interweaving of their relationship gets uncomfortably tighter at a time when Mateo aims to loosen their ties.

There is also an important buddy element to Marcantonio’s tale. Mateo and the lovable but inept local sheriff, Benjamin Ortega, are lifelong friends, and when weirdness descends on Guadalupe in the form of a bizarre drowning and murders, Sheriff Ben leans heavily on his intellectually sharper amigo to make sense of everything. Everything includes greed, civic venality, ancient rituals and intense strains on the bonds of friendship.

Along the way, Marcantonio keeps the narrative fluid and sprightly. She is a master of simile, which adds its own kind of magic to the mix and brightens the story’s darker moments. The book is captivating and before you know it, its nearly 400 pages have disappeared like a high desert mirage or the restless spirits of an ancient village finally and magically put to rest.

Bill
4.0 out of 5 stars Your Perfect Halloween Read
Reviewed in the United States 🇺🇸 on September 6, 2022
Reading Under the Blood Moon by Patricia Santos Marcantonio is like taking a leisurely walk through the sleepy NM town of Guadeloupe, throwing back beers and munching churros with friends, and gossiping on the porch with neighbors, before things take a turn for evil.

Marcantonio immersed me in great Latino and Mexican local color, and ancient horror in a buddy detective story that made me feel like I was part of the investigating team. Creepy atmosphere, vivid characters, poignant moments, and snappy lines make Under the Blood Moon an engaging story that will give you a tingly chill if you read it home alone at night.

There are a few minor production errors, but they did not diminish my enjoyment of this book. From a well-crafted slow burn to a fast, satisfying ending, this story is worth the goosebumps you’ll get tearing through it. Add to cart.
Read more
Helpful
Report abuse

Rocky DeSantis
5.0 out of 5 stars Another great title from this author.
Reviewed in the United States 🇺🇸 on November 10, 2022
I have read all of Patricia Santos Marcantonio's novels, and they are all fantastic. Each one delivers a gripping story arch that keeps me guessing with every turning page. Her characters feel real and relatable, while also being unpredictable and creative. You will find a hero in unlikely characters.

Under the Blood Moon is a fantastic read, bringing Mexican-American folklore to the forefront of growing up in the mid-west. Unique, spooky stories that give you a scare, but don't entice you to put down the book. I found it very difficult to stop reading out of a necessity to know what happens next.

I strongly recommend this book, as well as any other book by Patricia. You truly cannot go wrong selecting a Patricia Santos Marcantonio novel.
Read more
Helpful
Report abuse

pipersmom
5.0 out of 5 stars Terrifying times in New Mexico
Reviewed in the United States 🇺🇸 on October 12, 2022
Something is very wrong in the middling sized town of Guadalupe, New Mexico. And solving the problems is going to take more than traditional police work. Author Patricia Marcantonio has written in the past books of fairytales with an Hispanic bent, courtroom drama, a Victorian-era sleuth, and dark fantasy and horror. In her latest book, she cleverly combines all these genres and adds a dash of romance. The Hispanic influenced myths and fables she heard as a child shape this novel. They definitely were not ‘happily ever after’ tales. Matthew Riley is a bored county attorney in Guadalupe, New Mexico on his way to what he hopes will be a more fulfilling job in Albuquerque. Then, a demon gives birth in a park. A body count begins, each death more gruesome than the other. Riley and childhood friend Sheriff Benny Ortega decide to work together to solve them. Trouble is, not all these murders seem to have come from human hands! I suspect that Marcantonio wrote this book as spooky entertainment with no intent of addressing deep issues. Nevertheless, ‘Under the Blood Moon’ does make you think about subjects like friendship, honesty , loyalty, and betrayal. This is a quick read because it will be hard to put down. I enjoyed it very much.
Read more
Helpful
Report abuse

Danny boy
5.0 out of 5 stars Exciting read!
Reviewed in the United States 🇺🇸 on November 4, 2022
This is a great read regardless of whether you are familiar with the culture or not. The way it is written gives you a feel for the culture and the intrigue and suspense is spell binding. I couldn't put it down, read it straight through,it was like binge watching on Netflix! The way it was written I pictured myself right there with the characters and the places. I LOVED it!
Read more
Helpful
Report abuse

Stella
5.0 out of 5 stars Great Book!
Reviewed in the United States 🇺🇸 on September 28, 2022
This book was very suspenseful. I enjoyed reading it. It kept you you wondering what was going to happen next. Couldn't put it down. Will read more of this author's books.
Read more
Helpful
Report abuse
See all reviews