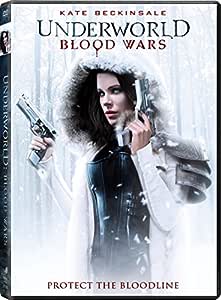 Underworld is a series of action horror films created by Len Wiseman, Kevin Grevioux and Danny McBride. The first film, Underworld, was released in 2003. It tells the story of Selene (Kate Beckinsale), a vampire who works as a Death Dealer, killing the lycans who allegedly slaughtered her family. The second film, Underworld: Evolution, was released in 2006. In this film, Selene takes Michael Corvin, a lycan/vampire hybrid, to a vampire safehouse and plans to return to Viktor's estate to awaken another elder Markus, whom they discover is the first Vampire and a powerful enemy. The third film, Underworld: Rise of the Lycans, is the prequel to the series, chronicling the origins of the vampire-lycan war (it was released on January 23, 2009). The fourth film, Underworld: Awakening, is the sequel to Underworld: Evolution and was released on January 20, 2012. In this film, humans have discovered the existence of the vampire and lycan clans, and are trying to eradicate both species. A fifth film titled Underworld: Blood Wars was released internationally on November 24, 2016, and in the United States on January 6, 2017.

The 5th Film in the Underworld Series starring Kate Beckingsale

In the next installment of the blockbuster franchise, Vampire death dealer Selene (Kate Beckinsale) fends off brutal attacks from both the Lycan clan and the Vampire faction that betrayed her. With her only allies, David (Theo James) and his father Thomas (Charles Dance), she must stop the eternal war between Lycans and Vampires, even if it means she has to make the ultimate sacrifice.