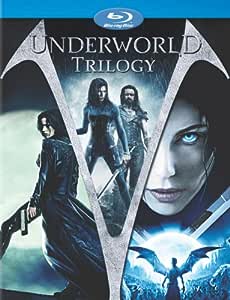 Rated:
R
Format: Blu-ray
4.6 out of 5 stars 768 ratings
Available at a lower price from other sellers that may not offer free Prime shipping.

Underworld
Underneath the city streets, amid the labyrinth of subway tunnels and gothic ruins, the two most notorious creatures of the night are embroiled in an all-out war that has been going on for centuries. It is the culmination of a blood-thirsty battle between the vampires and their mortal enemies, the werewolves. Stars: Kate Beckinsale (Pearl Harbor, My Life Without Me), Scott Speedman (My Life Without Me, TV's Felicity).

Underworld: Evolution
The saga continues as the battle rages on between the death dealers (vampires) & the lycans (werewolves) in this fast-paced modern-day tale of deadly action ruthless intrigue & forbidden love all leading to the battle to end all wars as the immortals finally face their retribution.

Underworld: Rise of the Lycans
Underworld: Rise of the Lycans delves into the origins of the centuries-old blood feud between the aristocratic vampires, known as Death Dealers, and the barbaric Lycans (werewolves). A young Lycan, Lucian (Michael Sheen), emerges as a powerful leader who rallies the werewolves to rise up against Viktor (Bill Nighy), the cruel vampire king who has persecuted them for hundreds of years. Lucian is joined by his secret lover, the beautiful vampire Sonja (Rhona Mitra), in his battle to free the Lycans from their brutal enslavement.

Underworld
Blade meets The Crow and The Matrix in Underworld, a hybrid thriller that rewrites the rulebook on werewolves and vampires. It's a "cuisinart" movie (blend a lot of familiar ideas and hope something interesting happens) in which immortal vampire "death dealers" wage an ancient war against "Lycans" (werewolves), who've got centuries of revenge--and some rather ambitious genetic experiments--on their lycanthropic agenda. Given his preoccupation with gloomy architecture (mostly filmed in Budapest, Hungary), frenetic mayhem and gothic costuming, it's no surprise that first-time director Len Wiseman gained experience in TV commercials and the art departments of Godzilla, Men in Black, and Independence Day. His work is all surface, no substance, filled with derivative, grand-scale action as conflicted vampire Selene (Kate Beckinsale, who later became engaged to Wiseman) struggles to rescue an ill-fated human (Scott Speedman) from Lycan transformation. It's great looking all the way, and a guaranteed treat for horror buffs, who will eagerly dissect its many strengths and weaknesses. --Jeff Shannon

Underworld: Evolution
Better action, a bit of sex, and gorier R-rated violence make Underworld: Evolution a reasonably satisfying sequel to 2003's surprise hit Underworld. Looking stunning as ever in her black leather battle gear, Kate Beckinsale is every goth guy's fantasy as Selene, the vampire "death dealer" who's now fighting to stop the release of the original "Lycan" werewolf, William (Brian Steele) from the prison that's held him for centuries. As we learn from the film's action-packed prologue, William and his brother Marcus (Tony Curran) began the bloodline of vampires and werewolves, and after witnessing centuries of warfare between them, their immortal father Corvinus (Derek Jacobi) now seeks Selene and the human vampire/lycan hybrid Michael (Scott Speedman) to put an end to the war perpetuated by Victor (Bill Nighy), the vampire warrior whose betrayal of Selene turns Underworld: Evolution into an epic tale of familial revenge. This ambitious attempt at Shakespearean horror is compromised by a script (by Danny McBride and returning director Len Wiseman, Beckinsale's real-life husband) that's more confusing than it needs to be, with too many characters and not enough storytelling detail to flesh them all out. Aspiring to greatness and falling well short of that goal, Underworld: Evolution succeeds instead as a full-throttle action/horror thriller, with enough swordplay, gunplay, and CGI monsters to justify the continuation of the Underworld franchise. If you're an established fan, this is a must-see movie; if not, well... at least it's better than Van Helsing! --Jeff Shannon

Underworld: Rise of the Lycans
This prequel to Len Wiseman’s Underworld and Underworld: Evolution is distinctively different, especially minus the nimble vampire warrior star, Selene (Kate Beckinsale). Underworld: Rise of the Lycans takes its cues from the vampire/werewolf battles that occur in the other films, but director Patrick Tatopoulos focuses here on the young werewolf Lucian's (Michael Sheen) rise to leadership. Rise of the Lycans is set mostly within the walls of vampire lord Viktor’s (Bill Nighy) castle, so the film’s silver, black, and blue palette reflects a world happening under moonlight. From the outset, when Viktor brings Lucian, the first werewolf, into the world, this villainous bloodsucker’s daughter, Sonja (Rhona Mitra), is smitten with Lucian’s hairy appearance and instinctual intelligence. As years pass, Lucian grows tired of watching his race suffer slavery and imprisonment, and recruits a human named Raze (Kevin Grevioux) to assist rebellion. This archetypal plot is not so riveting, and what carries Underworld: Rise of the Lycans are the battle scenes between vampires and werewolves, which are excitingly fast-paced and brutal. The whole film adopts a medieval battlefield aesthetic that carries an otherwise clichéd story about illicit love and freedom fighting. Some characters, like the traitor vampire Tannis (Steven Mackintosh), also intrigues throughout, as one guesses who he will ally with. Underworld: Rise of the Lycans may not be the finest film in the werewolf and vampire archives independently, but its mixed monstrosity makes it unique and entertaining, especially on a big screen. --Trinie Dalton