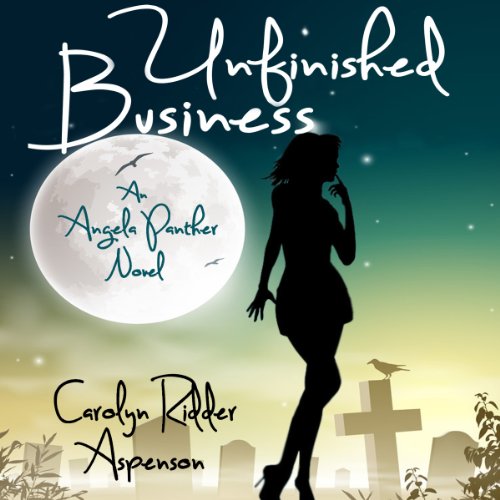 List Price: $17.99
You Save: $2.00 (11%)
By completing your purchase, you agree to Audible’s Conditions Of Use
Sold and delivered by Audible, an Amazon company
Share

4.4 out of 5 stars
4.4 out of 5
265 global ratings
How are ratings calculated?
To calculate the overall star rating and percentage breakdown by star, we don’t use a simple average. Instead, our system considers things like how recent a review is and if the reviewer bought the item on Amazon. It also analyzes reviews to verify trustworthiness.
Top reviews

Miabellalife
5.0 out of 5 stars Funny, Real, Emotional and Fun read.
Reviewed in the United States on June 17, 2019
Verified Purchase
I loved this book. The “ghost” aspect of it had me not expecting to like it this much. I am not usually into the paranormal cozies, although it is a very popular sub-genre right now. I was shocked to find that I really enjoyed it.

The whole plot about what Angela kind of gets forced into after her mother’s death was really good. The experiences she has are amazing. Her emotions are realistic and engaging. Angela is a well developed character with amazing relationships with her husband Jake and best friend Mel. Her realistic portrayal of life with a teenage daughter and a young son is great. The relationship with her Mom is hilarious as is her conversations with Mel. Super enjoyable and yet touching as well. I highly recommend this series.
Read more
2 people found this helpful
Helpful
Report abuse

Anja
5.0 out of 5 stars All these books are so awesome
Reviewed in the United States on January 13, 2019
Verified Purchase
I started Angela Panther with book 4, I had no idea there were more than just that one. I loved it! The friendship between Angela and Mel, their bickering, it's just how a friendship should be.
Angela has a gift that was dorment while she was growing up. When her mother dies, the gift is awoken and Angela has to deal with this. Which is hard. It changes her world upside down. But with the support of her husband, son and best friend she learns how to cope. I'm very curious about all the coffee recipes in there, so next time I'm at that particular shop I'm going to ask for one Angela and Mel like to drink ;)

I recommend this series to everybody who likes a light read, a little bit of paranormal stuff, humor, friendship and family!
Read more
One person found this helpful
Helpful
Report abuse

Anne
3.0 out of 5 stars This isn't a mystery or thriller or really a paranormal read.
Reviewed in the United States on August 10, 2016
Verified Purchase
While it says I'm a verified purchaser, I originally got a copy from Netgalley in exchange for my honest review. I forgot I had the review copy and picked it up for free from Amazon.

Well, I'm going to give this an ok rating because I had no problem finishing it, but I honestly wouldn't recommend it to anyone. It's not a mystery or thriller. While Angela does start to see ghosts after her mother dies, the story could easily be rewritten to make the ghosts neighbors or friends removing the very limited paranormal aspect. So, no to mystery or thriller readers and no to UF or paranormal readers. That leaves straight chick lit, a genre I am not a fan of. While there is some sadness, it's minimal so it's not a Laveryl Spencer weeper. Just a disappointment.

I will say the first thing I thought as I started the book was "How refreshing to read a book where the woman is happily married." Seems like forever since I've read a book with a married main character much less a happily married one.
Read more
4 people found this helpful
Helpful
Report abuse

T.O.Powell
4.0 out of 5 stars Touching, But Funny
Reviewed in the United States on November 16, 2017
Verified Purchase
A very enjoyable ghost story. I actually read this one AFTER I'd already read Books 2, 3 & 4 (..I just wanted to see how it all began) and I'm glad I did. Heck, if we knew the afterlife was truly like this, it would make the prospect of dying seem much easier to deal with. Ms. Aspenson does a fair blend of religious beliefs after death with supernatural leanings. It definitely worked for me and I bet it will for you, too.

I especially like Angela's mom, who was a ghost...excuse me I mean, a "celestial being"...and was hilarious. The two best friends, Angela and Mel, had a continuously funny dialog but Fran as the smug and nagging "Mother Back From the Dead," was the best. You should read this book just for that, if nothing else!
Read more
One person found this helpful
Helpful
Report abuse

MidwestMom
5.0 out of 5 stars Fun, thought provoking story line. Two thumbs up.
Reviewed in the United States on August 14, 2017
Verified Purchase
I read Unfinished Business over the weekend, my first dip into Aspenson's writing, after asking a group for recommendations for fun and easy to read books to keep me entertained after surgery.

Unfinished Business read quickly, with a few story lines carried through the book. Each story line is given just the right amount of attention, and characters are well introduced and developed as the plots play out. As the chapters unfolded it was easy for me to become invested in the characters, and I not only finished the book quickly but didn't hesitate to purchase the second (and then third!) book in the series.

This is a fun, yet thought provoking story, that moves at a good pace. I would not hesitate to recommend it to any mystery/paranormal enthusiast friend.
Read more
One person found this helpful
Helpful
Report abuse

Liko01
2.0 out of 5 stars Not A Mystery & Very Slow Start
Reviewed in the United States on August 24, 2016
Verified Purchase
I did not care for this book so I wouldn't recommend it but that's my subjective opinion, based on my preferences. In my opinion, it's NOT a mystery or a thriller nor is it a paranormal story. It's more like chick lit with an "I see dead people" element. It also starts off very slow. 20% into the book, the only mystery was whether I'd bother to keep reading.

The author quickly establishes that the main character - Angela - is Italian, and then hammers you over the head with it by having the ghost of "Ang's" mother constantly exclaiming "Madone!" I'm Italian so I know the slang but I found myself wondering how many readers had no idea how to pronounce the word or what it means. (Basically, it's Italian for Madonna or Mother of God, pronounced "marhonne". It's usually used as an exclamation such as "OMG!" or "what the hell?")

I found the banter between Ang and her best friend Mel more than a little trying at times. One exchange via text features Mel complaining about having her period. When it devolved to the point of her texting, and this is an actual quote, "My vajayjay smells." I was pretty much done. I also find it frustrating that so many female protagonists in these types of books have body issues AND food issues. Referencing concerns about weight, parts of her body she doesn't like and displaying food fixations makes Ang no exception. In one scene, Mel brings over huge, gourmet cupcakes and giant slices of cheesecake. After stuffing her face with 2 servings of each, Ang's mind set was, quote, "I was pretty sure I'd throw up later, but I didn't really care." Yuck!

Like I said, this style just isn't my thing but even so, I'm surprised I'm the first to give this book two stars. I guess I just didn't get it. Perhaps it resonates more with younger middle aged women with teenage and about to be teenaged kids.
Read more
10 people found this helpful
Helpful
Report abuse
See all reviews

Book Maniac
4.0 out of 5 stars Mixed feelings about this one
Reviewed in the United Kingdom on July 25, 2017
Verified Purchase
This would have got five stars but for one irritating phrase that Angela used when talking to her son, Josh. She kept calling him little man and never used any other form of affection such as sweetheart, sweetie, darling etc., and I found it aggravating and not at all what would happen in real life because. husbands and children would get different forms of endearments to keep things interesting and Angela, surely, couldn't possibly be that one dimensional with her son. I did not particularly like Angela's character as I thought she was pretty self centred and unsympathetic but she shows promise of changing towards the end of the book.

Apart from these negatives (in my opinion) the book is really interesting with some very heart wrenching moments where a box of tissues might come in handy. I had a love hate relationship with this book - parts of it I found distasteful (Angela and Mel speak about cringe-worthy stuff that could be labelled TMI) but other parts are very insightful and moving. There are some entertaining moments and I had to laugh a few times so this book is a very mixed bag but well worth a read.
Read more
Report abuse

SJChelt
5.0 out of 5 stars Great story.
Reviewed in the United Kingdom on April 7, 2018
Verified Purchase
First in the series, please see my full write up on book4, although there is another book after,Do not miss the last one. Great series of books, read if you have an open mind to the supernatural, read even if you don't just to convert you. No real truth in it but a wonderful idea.
Read more
Report abuse

Bordera
4.0 out of 5 stars Great read
Reviewed in the United Kingdom on August 11, 2016
Verified Purchase
This is so funny yet touches on the saddest aspect of life, death. Beautifully written. My only regret was the ending, it was just a little too sudden, for instance, the pill popping parties mystery was solved but not resolved and that was a shame.
Read more
Report abuse

K. Young
2.0 out of 5 stars Reading it became a chore
Reviewed in Canada on March 23, 2020
Verified Purchase
I couldn't finish this book.
It's not that it was bad, per se, it just wasn't interesting. It was taking forever for anything to happen.
I got to 51% and asked myself if I was enjoying it. The answer was no. Then I asked myself why I was continuing to read it. So I stopped.
Judging by other reviews, I'm not in the majority here. But there are so many books that I enjoy out there, I decided to not waste any more time on one that was increasingly a chore to read.
Read more
Report abuse
See all reviews
Back to top
Get to Know Us
Make Money with Us
Amazon Payment Products
Let Us Help You
EnglishChoose a language for shopping. United StatesChoose a country/region for shopping.
© 1996-2021, Amazon.com, Inc. or its affiliates