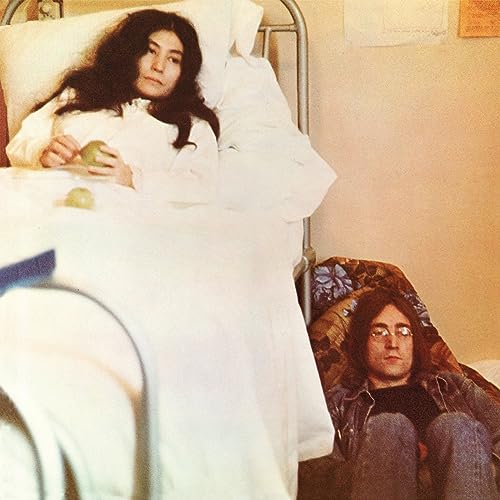 Unfinished Music No. 2: Life With The Lions

John Lennon/Yoko Ono
May 9, 1969
4.1 out of 5 stars 146 ratings
See all 18 formats and editions Hide other formats and editions
Buy the CD album for $15.29 and get the MP3 version for FREE.&nbspCD album ships from and sold by Amazon.com. Terms and Conditions. Does not apply to gift orders. Complete your purchase of the CD album to save the MP3 version to your Music Library.

4.1 out of 5 stars
4.1 out of 5
146 global ratings
How are ratings calculated?
To calculate the overall star rating and percentage breakdown by star, we don’t use a simple average. Instead, our system considers things like how recent a review is and if the reviewer bought the item on Amazon. It also analyzes reviews to verify trustworthiness.
Top reviews

ResurrectionWaiting
1.0 out of 5 stars A tool for the pest control industry
Reviewed in the United States on April 27, 2021
Verified Purchase
If the first 30 minutes of this is played loud enough, not only will the cockroaches leave the building, they are guaranteed never to return.
Gets one star for baby John Ono Lennon's heartbeat, the only sound we would hear from him.
Read more
One person found this helpful
Helpful
Report abuse

Mike Emery
4.0 out of 5 stars A recorded diary of a troubled but liberating time
Reviewed in the United States on July 8, 2012
Verified Purchase
This album has a long performance art piece on the first side, and on the second side includes the listener in a hospital stay during which Yoko miscarried a baby conceived with John. It is the second album of a trilogy of sorts, all dealing with the early stages of their relationship as lovers and artistic collaborators (the other albums are 'Unfinished Music No. 1: Two Virgins' and 'Wedding Album'). Of the three I like 'Wedding Album' best, but this one has power. Not very interesting musically, 'Life with the Lions' is a fascinating artifact of the end of the Beatles era (and the end of the '60s). The performance on side one was done live in Cambridge in early March 1969; it's more an event than music, in keeping with Yoko's avant-garde roots. The second side starts with a half-sung tune by Yoko from her hospital bed, while John echoes her (the material was captured by a cassette tape recorder). She muses about the hospitalization, the fate of 'Two Virgins', and being John's girlfriend (he was still married to Cynthia). The next track records the baby's heartbeat (with a microphone held to Yoko's abdomen). Two minutes of silence follow, giving the miscarried child a funeral of sorts; this track has the most impact on me, because the silence goes deeper than any words could. The last track on the side sounds like cards being shuffled; it's actually a radio dial being flicked across radio stations, and as an exercise in boredom is on par with Warhol. The album as a whole, including the striking cover (the back shows John and Yoko surrounded by policemen on the street after a trial for possession of drugs), reveals these artists as determined to create their own media, rather than being used by the commercial media that turned the Beatles' fame against them. Although 'Revolution #9' (on the 'White Album') remains the most successful track John and Yoko collaborated on in the '60s (where Yoko is heard saying 'You become naked'), committed fans of John and Yoko should hear this album; the two share themselves completely with their listeners on it, and reinvent what a pop album can do and be. This CD release adds two tracks that do not appear on the original album.
Read more
9 people found this helpful
Helpful
Report abuse

beatcall
5.0 out of 5 stars John Lennon 2
Reviewed in the United States on December 10, 2016
Verified Purchase
The second of the first two LPs after the Beatles. Not a lot of music, and they recorded the baby's heartbeat as it died.
Read more
One person found this helpful
Helpful
Report abuse

The Peripatetic Reader
5.0 out of 5 stars Groundbreaking
Reviewed in the United States on August 20, 2014
Verified Purchase
You can imagine what the general public must have thought when this album, Life with the Lions, was released. If most were anticipating the usual Beatles stuff from its leader, John Lennon, what a surprise they must have had.

This is an album of pure noise, a la John Cage. Much of the pieces are discordant, some are positively unlistenable. Matters are not made better from the fact that the longest piece in the collection, Cambridge 1968, is over twenty minutes long and features annoying guitar feedback from Lennon and ear-shattering screaming from Yoko Ono. Another shorter piece consists of the sound of a heart-beat of Yoko's dying, miscarried child. While the passage of time has made this type of music more commonplace, this album is still a difficult listening experience.

Some of the reviews of this album are savage. The negative reviews miss the point. As a piece of modern experimental music, this album is made to order. If the listener is expecting a collection of pop songs, well, look somewhere else, you won't find it here. No "Silly Love Songs" here.

John Lennon used his fame and notoriety to popularize a small, cult-ish part of music. This and other Lennon-Ono collaborations accordingly made the emergence of groups like Sonic Youth possible and stretched the boundaries of music. That said, it doesn't make sitting down and listening to this album any easier.

Lennon and Ono must have known that the public's reaction would be negative. Ostensibly, the title is a pun on the title of a BBC sitcom. The title also has a double meaning, the "lions" being the public not accepting their work.

Anyone listening or thinking to purchase this album should accept and appreciate it for what it is: Experimental Music deluxe.
Read more
14 people found this helpful
Helpful
Report abuse

Robert Carlberg
2.0 out of 5 stars Unfinished Music No.2
Reviewed in the United States on May 21, 2007
Verified Purchase
The second in a series of anti-popstar releases designed to, and largely successful in, knocking John Lennon off the pedestal his fans had erected for him. With his new avant-garde wife at his side -- and enough money in the bank to last a lifetime -- Lennon set about ruining his bank value so he could return to being a 'private citizen.' All three albums -- Two Virgins, Life With The Lions & Wedding Album -- are potent reminders of a simpler time when artists could experiment wildly (or just be very silly) and still get released and distributed (erm, somewhat). Rykodisc nicely duplicates the original packaging and the remastered sound quality is, for 1967, pretty darn good.

CELCON
4.0 out of 5 stars Unfinished Music #2 Life With The Lions
Reviewed in the United States on May 16, 2011
Verified Purchase
You know it took me many years to even try to understand why this even made any sense at all. Well it still don't. If you are a collector of John Lennon's past this is the one to get. Although being a collector as myself, go for the numbered edition. It seems to be a collector's item just to have. You can chance listening in headphones but I would not advise it.
Read more
One person found this helpful
Helpful
Report abuse
See all reviews

L'angelo mysterioso
2.0 out of 5 stars Great Package, but beware faulty pressings!
Reviewed in the United Kingdom on April 3, 2020
Verified Purchase
Great package, nicely presented but very disappointing to discover both this record and the copy of 'Two Virgins' I purchased at the same time were faulty pressings.
Both records jump incessantly for the first half inch of side two, meaning they are unplayable on my turntable.
The 'music' is unplayable as well - but I already knew that! The vinyl should be technically playable, even if what you listen to is a once in a lifetime listen!
A great shame - a little more care in the pressing process is required, as otherwise the packaging of both releases is really good and they would have completed my collection nicely.
Read more
2 people found this helpful
Report abuse

Pe Ke
3.0 out of 5 stars Amazing, but ........not amzing.
Reviewed in the United Kingdom on January 26, 2018
Verified Purchase
It is not a record you listen to very much. It is something to get for your collection.
My record was sealed but still the vinyl was full of dust and it looks second hand. But when I played there were no sounds, and it sounded good.
I rank it with 3 stars, because the insers are very nice.I never saw them anywhere before and I consider myself being a die-hard Beatlesfan.
Read more
2 people found this helpful
Report abuse

Gordon Abbey-Tibbitts
1.0 out of 5 stars Yoko influenced junk
Reviewed in the United Kingdom on May 22, 2019
Verified Purchase
Not johns best work by many many miles
Read more
Report abuse
See all reviews