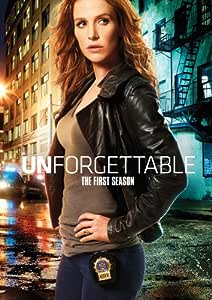 The series follows a former New York City police detective named Carrie Wells, who suffers from hyperthymesia, a rare medical condition that gives her the ability to remember everything. She is reluctantly asked by her former boyfriend and one-time partner to join his homicide unit after he asks for help with solving a case. The move allows her to do the one thing she has been trying to remember, that of finding out how her sister was murdered.

4.6 out of 5 stars
4.6 out of 5
655 global ratings
How are ratings calculated?
To calculate the overall star rating and percentage breakdown by star, we don’t use a simple average. Instead, our system considers things like how recent a review is and if the reviewer bought the item on Amazon. It also analyzes reviews to verify trustworthiness.
Top reviews

Wyoming reader
5.0 out of 5 stars Good tv series--great cast.
Reviewed in the United States on May 4, 2019
Verified Purchase
The writing and acting are superb. No four language or extreme violence. I always liked Poppy Montgomery when she was in Without a Trace, but she really shines in this show. I liked it so much that I bought Season 2. The extra features are well worth watching, too.
Read more
6 people found this helpful
Helpful
Comment Report abuse

Hope from California
4.0 out of 5 stars Unforgettable, Season 1
Reviewed in the United States on October 6, 2014
Verified Purchase
Although i enjoyed most aspects of this show, I didn't go for Season 2 because the main female lead is too smart ass for me. She always goes her own way, no matter how it might affect the other people she is supposed to be teamed with or how much danger she creates for herself by this behavior. I would say "not a good team player, does not work well with others" sums her up pretty thoroughly.

She is tough and capable as a character, but this one aspect of her personality is such a turn off for me because of its consistency and foolhardiness, I have decided to forgo the rest of the series. If you don't mind this type of performance, then the other aspects of the series, such as the writing and the stories each week are engaging.

Ted Cohen
5.0 out of 5 stars An Amazingly Unusual Police Show
Reviewed in the United States on June 21, 2015
Verified Purchase
This is an amazingly entertaining, captivating and unique police show that could also be called a science fiction show. Poppy Montgomery plays a police detective who has a unique ability that not only allows her to solve crimes, but thanks to her unique ability, allows the viewers to get to know her as a person.

In a typical police show the investigators little by little narrow down the list of suspects using logic and interviewing possible perpetrators, until finally the evidence leads to an arrest, but we rarely get to know anything about the investigators as people. In this show, we get to see how Poppy Montgomery’s character figures out who the guilty party is by using her unique, science fiction ability and her intelligence to eliminate suspects until she zeroes in on the guilty party. Even better, along the way, we get to know her as a person.

Anyone who has seen Poppy Montgomery in the first two seasons of Without a Trace walks away from the show without knowing anything about her character. Like the other detectives on Without a Trace she is simply reciting lines. There is nothing special or remarkable about her. We never have the opportunity to get to know her as a person. On Unforgettable we get to know everything about Poppy Montgomery’s personality which comes to life, which is such a pleasure. She actually becomes a real person on this amazing show, thanks to her unique science fiction ability. She becomes someone anyone would love to know and be with.

The producers of the show did a magnificent job and Poppy Montgomery has the talent to pull it off. This is easily one of the best TV shows I’ve ever seen.

Divascribe
VINE VOICE
5.0 out of 5 stars Enjoyable crime series
Reviewed in the United States on October 21, 2015
Verified Purchase
This crime series is based on an unusual premise -- there's an NYPD detective, Carrie Wells, who has a faultless memory. She can remember what happened on a particular day years ago, and she also can remember tiny details from crime scenes. That makes her a whiz at solving murders. She's working for her former boyfriend, with all the expected awkwardness that involves, and she's still trying to solve the murder of her sister when they were both kids 20 years ago. While that search is always in the background, each episode is self-contained and has its own murder to solve. Poppy Montgomery is wonderful as the fiery, red-haired Carrie, and the rest of the cast is good as well.
Read more
4 people found this helpful
Helpful
Comment Report abuse

Never1701
5.0 out of 5 stars Interesting concept with a good pace
Reviewed in the United States on May 12, 2014
Verified Purchase
Normally I hate cop dramas with an established ongoing storyline especially from CBS. The main character on this show however is interesting and the story has a good pace interjecting moments of her ongoing quest without ruining the pace of the individual episode. Montgomery's main character is anything but infallible both professionally and personally. Although the nature of her perfect memory main undermine the show later on at the onset it is a very fascinating concept sure to make everyone who watches it insanely jealous while still showing that it can erode at her mental stability. Great show to keep an eye on!
Read more
9 people found this helpful
Helpful
Comment Report abuse

B. Brierly
5.0 out of 5 stars glad to have
Reviewed in the United States on January 8, 2014
Verified Purchase
Unforgettable was on one season and then disappeared. Nothing was said as to why it left the air and we couldn't figure it out because it was such a good series. The cast of characters was great and the story lines were also great. Then in 2013 it appeared back on the air for season 2 after being off for a year. Then this DVD became available and we bought it. Season 2 puts the main characters in a different situation than season one but it is still a great show. I hope they add a couple of the characters from season 1 to the season 2 or 3. We miss those characters. But other than that we are definitely fans.
Read more
4 people found this helpful
Helpful
Comment Report abuse
See all reviews

See More:
4.0 out of 5 stars GR8 first season, Try it out its a steal at its price.
Reviewed in the United Kingdom on May 28, 2015
Verified Purchase
Unforgettable - is in the same story-line genre as Fringe, but as its a spin-off copy-cat TV Show, it has its limitations.
The Story-Line is great, so you get a GREAT deal for £8.99 getting a complete first season. Hours of enjoyable family/ suspense TV.

Typical of all spin-off shows from USA, this series fell foul of TV ratings, it just didn't just make the mustard for the ratings people - so like many "spin-off" shows it was AXED after its first season of airing! Indoing so joined the list of many other GREAT TV-series that have gone this way, like Revolution, Fire-Fly etc it bit the dust!

BUT, viewers complained... and the show was picked up by another network, and several years after the first season was cancelled, a NEW production produced Season 2.

Season 2 has all the same characters, same story-lines, but somehow this second season just didn't work out. We got hooked on the 1st Season, then waited for a couple of years to get the 2nd season only to be disappointed. It wasn't just quit right. It was slow and long drawn out plots made us switch off... sad to say.

Overall - the 1st season is enjoyable, it will get you motivated to watch the 2nd season - but the 2nd season will let you down, and you will know why the first season was cancelled.

PROS::
+ Good storyline
+ there is a second follow on season to watch...

CONS::
- Show was cancelled after 1st season by the Network due to ratings
- 2nd series was a bit of a yawn...

PatC
5.0 out of 5 stars A long-term favourite!
Reviewed in the United Kingdom on April 3, 2019
Verified Purchase
Bought so we can watch when we want - the series finished some time ago but the idea of a cop when never forgets anything was absolutely great - good easy to watch entertainment! Now just got to save for the rest!
Read more
One person found this helpful
Report abuse

davana
2.0 out of 5 stars Boring!
Reviewed in the United Kingdom on September 1, 2019
Verified Purchase
Run of the mill series with mostly implausible plots for the lead actress to resolve.
Read more
Report abuse