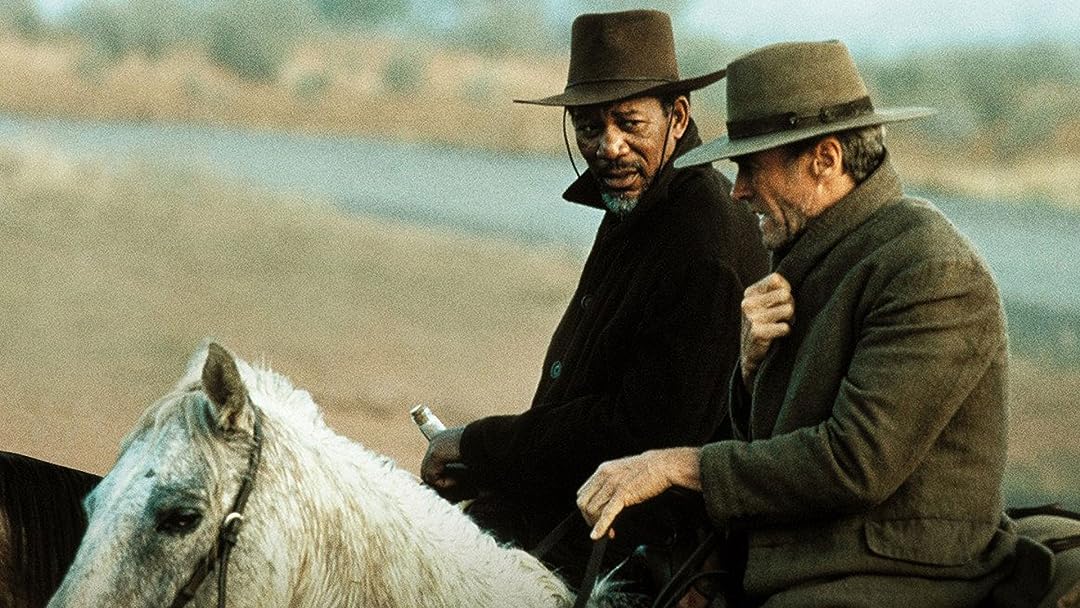 (7,617)
2 h 10 min1992X-RayR
Retired Old West gunslinger William Munny reluctantly takes on one last job, with the help of his old partner and a young man.

ghislain boivinReviewed in the United States on October 31, 2022
5.0 out of 5 stars
Stunning image and sound restoration !
Verified purchase
No noise, no mosquito, no blurr, no bugs.......just delight !

David W.Reviewed in the United States on August 31, 2020
5.0 out of 5 stars
What's Unforgivable
Verified purchase
The only things that are unforgivable about this movie are the commentary track by Richard Schickel and John Cusak’s narration of the “Eastwood on Eastwood” documentary.

Schickel’s commentaries on the Dollar Trilogy movies were excellent. This one was awful. His mumbling is worse than ever at times, making him very hard to understand. He offers some insight into the production of the film, but most of the time he meanders around in anti-gun/anti-violence musings. His analysis of the characters and their motivations is somewhere between the viewpoint of David Hogg and Chicago’s Mayor Lightfoot.

Schickel complicates and insults what is otherwise simple and noble. Contrary to his revisionist fantasy, Clint’s character had been genuinely transformed from his evil ways and Christian faith thanks to his wife. He wasn’t fooling himself or trying to talk himself into anything; he simply didn’t want to kill anymore. But not all killings are bad. Some are good, and some are necessary.

Killing the sheriff was good. Killing those two cowboys who cut up the prostitute was necessary. The only one who didn’t deserve to die was Morgan Freeman’s character. Yes, the young cowboy (who tried to give the girl a pony & was killed first in the canyons) deserved to die. No, that’s not extreme. (What’s happening in blue cities today is extreme.) This was the wild west, not some soy milk cereal bar in Seattle or Portland. He held her while his friend cut her up, and he would have continued cutting her if the brothel owner hadn’t pulled a gun on him. Back then, the death penalty was imposed for a much broader range of crimes than it is now. And the courts in the Wyoming Territory were a mess in the late 1800s, so vigilante justice was the norm (read the last 2 pages of the Governor’s report for that region issued on November 11, 1881).

Schickel tries to turn this story into some sort of ACLU pamphlet co-authored by Dr. Phil, but Clint’s character was the only one dishing out true justice. Sometimes that’s hard, but it must be done. If you don’t deter bad conduct, it gets worse; just look at all the violent anarchy in blue cities around America right now.

God uses human hands, and Clint’s character was the only one with the spine to do the job because one of his partners was too weak (no, not reformed or enlightened, just plain weak) and the other was your typical yellow, lying, braggart. The only conflict (contrary to Schickel's tortured commentary) was that Clint's character wouldn't forgive himself. But when pushed hard enough at the end, he finally dropped that needless guilt, rose to the occasion, and did what needed to be done.

Cusak recorded his bland, monotone narration of the Eastwood documentary long before we knew just how much he hates America, but it’s still unbearable to listen to him and ironic he’d work with a true patriot like Clint.

The movie is great. Just skip the commentary and documentary.

Amazon CustomerReviewed in the United States on September 3, 2022
5.0 out of 5 stars
No good men
Verified purchase
Unforgiven is hard hitting western shown from the point of view of an old & broken man with a dark past who journeys to the town of big whiskey to do a job for a 1000 dollars.

Mark AlanReviewed in the United States on September 26, 2020
5.0 out of 5 stars
Maybe the Best Western Ever Made — In 4K HDR
Verified purchase
In "Unforgiven", Clint Eastwood, writer David Webb Peoples ("Blade Runner", "12 Monkeys"), and cinematographer Jack Green ("Bird", "Twister") collaborate to craft a simple story that shines a light on the realities of the Wild West that have usually been obscured by the fog of sensationalistic written accounts. It's a spare story, set in a spare environment that features hardened people struggling to forge a life in a hardened land. As such, it depicts a Wild West completely different than that portrayed in the dime novels and seedy publications popular in The East in the late 19th century. And it's great.

"Unforgiven" also serves as a reminder that heroes can emerge from distasteful histories, dotted with ruthless and even murderous episodes. In this story, the heroes are not seeking atonement, nor are they governed by forces out of the their control. They just are...because of what they do, not necessarily because of what they want. There also must be villains in any morality play. The villains featured here are those who cannot envision themselves existing outside of their pasts. For these men, it's less about notoriety itself than defending a notorious legend. This can be a lesson to any of us who wish for a fresh start, but still cling to a fragile past.

The HDR treatment of the film enhances every aspect of the photography's beauty: The sunset- and moon-lit prairie. The randomly flickering light of fading campfires. Candlelit, shadowy interiors. Bright midday street scenes. And the haunting, torch-lit spectre of Ned's corpse on display outside the saloon.

The lossless 5.1 surround audio enhances the film's atmospherics, especially the more raucous scenes. But its crystal clear rendering of dialog is the real "music" to our ears, creating intimacy in the middle of expansive surroundings and depth in confined spaces.

If you've never seen this film, other than perhaps on cable TV, you absolutely must experience it in 4K HDR. Even if you have seen it on Blu-ray, the clarity, depth of color, and shadow detail of this version will almost make it seem like a different film altogether. Different in the best possible ways.

Oscar RodriguezReviewed in the United States on August 3, 2022
4.0 out of 5 stars
Great film
Verified purchase
Great film for its time. Story is simple and to the point, still very enjoyable.

Amazon CustomerReviewed in the United States on August 31, 2022
5.0 out of 5 stars
Eastwood Magic!
Verified purchase
Outstanding movie with great stars as well as the man himself. Great Western!

Laura O'SheaReviewed in the United States on September 1, 2022
5.0 out of 5 stars
great movie
Verified purchase
all actors did a great job and great story

David J.Reviewed in the United States on August 28, 2022
5.0 out of 5 stars
Who doesn’t like Clint Eastwoods movies 🍿
Verified purchase
Brings back great memories of watching old westerns with my grandfather!
See all reviews
Back to top
Get to Know Us
Make Money with Us
Amazon Payment Products
Let Us Help You
EnglishChoose a language for shopping. United StatesChoose a country/region for shopping.
© 1996-2022, Amazon.com, Inc. or its affiliates