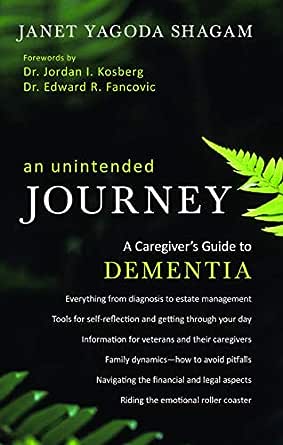 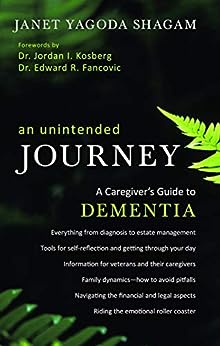 An Unintended Journey: A Caregiver's Guide to Dementia Kindle Edition

This advice-filled book is a helpful, service-oriented addition to the growing number of books about caring for loved ones with dementia, including Alzheimer’s disease. As freelance medical and science writer Shagam notes, as many as five million Americans suffer from Alzheimer’s, which causes “a slow and progressive decline in memory, thinking and reasoning skills.” Baby boomers who worry about their parents’, or their own, memory lapses will find the tables and charts in the book especially useful. One lists the 10 signs of Alzheimer’s, which include confusion regarding time or place and difficulty in completing familiar tasks such as driving to a familiar location. Another lists 10 signs that death will happen soon, which include swelling in the feet and ankles, and mottled skin. Though Alzheimer’s in America: The Shriver Report on Women and Alzheimer’s (2011) is a better book, this does provide practical, sensible advice for people who need it. --Karen Springen --This text refers to the paperback edition.

Janet Yagoda Shagam (Albuquerque, NM) is a freelance medical and science writer; a visiting professor at the Max Planck Institute in Göttingen, Germany; an artist and printmaker; and the coauthor (with Rebecca G. Rogers, MD, and Shelley Kleinschmidt) of Regaining Bladder Control: What Every Woman Needs to Know. She serves on the New Mexico Area Agency on Aging statewide Alzheimer's Task Force. --This text refers to the paperback edition.

” • FIRST PLACE WINNER: 2014 National Federation of Press Women Communications Contest Best General Nonfiction Book for Adult Readers • FIRST PLACE WINNER: 2014 New Mexico-Arizona Book Awards, Health Book category “[A] splendid manual… combines the practicality of a how-to guide with the heartfelt story of caring for a parent suffering from senile dementia. [Shagam] courageously transforms her painful journey into an enlightened guide and a primer on appreciating what you have while you have it.”-Publishers Weekly“This advice-filled book is a helpful, service-oriented addition to the growing number of books about caring for loved ones with dementia, including Alzheimer's disease.”-Booklist “Janet Yagoda Shagam is thoughtful, compassionate and clear in how she addresses what for many families is a heart-breaking topic.”-Prime Time Magazine --This text refers to the paperback edition.
Read more