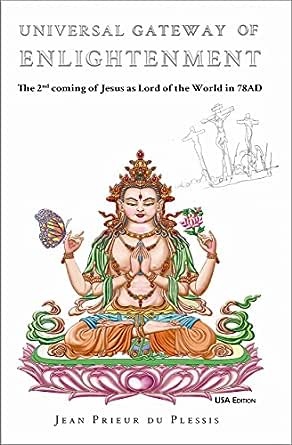 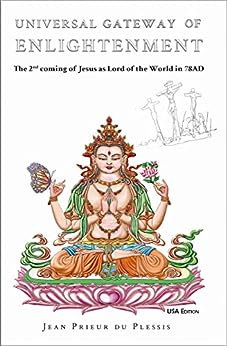 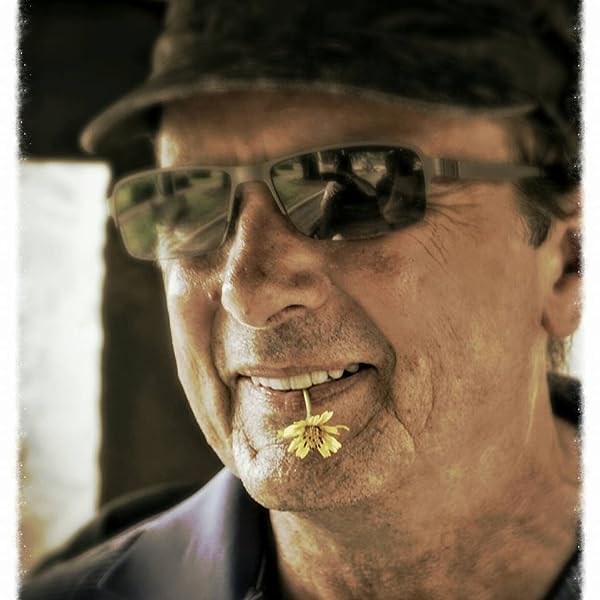 Universal Gateway of Enlightenment: The 2nd coming of Jesus as Lord of the World in 78AD Kindle Edition

Universal Gateway of Enlightenment is the product of decades of research. Rather than deliver the deeply profound, soul-changing truth of this story in a deadly boring philosophical book aimed at academics, I chose to speak rather to the general public--the people who really care about spirituality and their souls. Therefore, Universal Gateway of Enlightenment is delivered in the genre of "historical novel" and it is jam-packed with all the keys, clues and data that an academic may need to pursue studies in this topic.
Jean
~OM SHANTI SHANTI ~

Universal Gateway Of Enlightenment is not a Christian story, but it speaks volumes to matters of interest to Christians who dare to seek answers to those questions they are not "supposed to ask". This is not only a Buddhist story, of how a billion people embrace the World Savior, and it is not only a Hindu story of how yet another billion people know the Lord; and of course it is not only a Zen (Chen) story of how the movement started out and tapped into the Lord's teaching of the PranjaParamita. This is the ultimate story of Universal Enlightenment for all soul beings.
----------------
For students of theology, the book's website UniversalGatewayOfEnlightenment.com provides more than a hundred additional pages. There are several chapters with research pointers, maps, a Sanskrit word list, and more information about the sources that inform the book.

Janet Milstead
5.0 out of 5 stars Worth Your Soul's Effort To Read This Great Work
December 24, 2015
Format: Kindle EditionVerified Purchase
"Universal Gateway of Enlightenment: The 2nd Coming of Jesus as Lord of the World in 78AD", is a story within a story, which takes us from the Spirit Heaven of Sukhavati to the very earthly life of an incarnated Lord Iesous. Based on the deep eastern mystical, devotional, and traditional scholarship and research of its author, Jean Du Plessis, an engaging and highly fascinating story emerges from a well-mapped journey of a lifetime. We are taken along with Iesous, replete with his bodyguards provided by the Three Wise Men, (who are revealed as representatives of the major mystical traditions in the East), to Egypt, and then through the childhood and adolescent travels of Iesous, through the rich cultures, and their philosophies he refined, out through the Himalayas, to India where he meets Mari of Magadha, and through to his earthly end with which we are familiar. This is where familiarity with the historical tale will end for most. But in the East, as revealed in this book, a new awareness was born. Read the book to understand what has been understood in the East by some for almost two thousand years. I promise you it will be well worth your read. We are just beginning to hold this knowledge, and understand this wisdom, in the West.
Read more
Helpful
Comment Report abuse
See all 1 customer reviews
Write a customer review