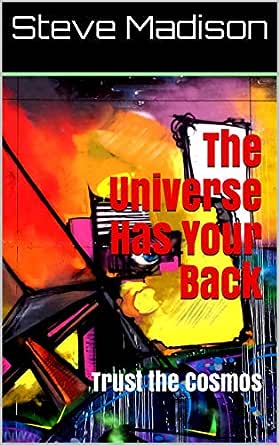 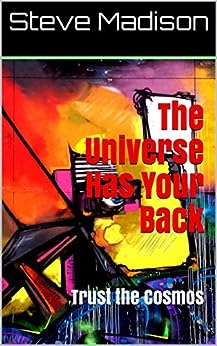 The Universe Has Your Back: Trust the Cosmos Kindle Edition

4.9 out of 5 stars
4.9 out of 5
14 global ratings
How are ratings calculated?
To calculate the overall star rating and percentage breakdown by star, we don’t use a simple average. Instead, our system considers things like how recent a review is and if the reviewer bought the item on Amazon. It also analyzes reviews to verify trustworthiness.

Brad Gumm
5.0 out of 5 stars Embrace Negentropy
Reviewed in the United States on July 31, 2019
Verified Purchase
This is yet another spectacular book written by the Pythagorean Illuminati. It is a book that will inspire you to embrace the mental, meaningful, and negentropic Truth of the Universe (which is ontological mathematics in case you were wondering), and begin to become your best (i.e. most autonomous and altruistic) self. It is a book about synchronicity and the urgent need for humanity to begin listening to the actual Truth of the Universe = ontological mathematics.

As it now stands, the human race is MUCH more interested in the lies that it tells itself about the nature of reality, and couldn't care less about the ontological mathematical Truth of the Universe (which proves to us that we are all eternal minds/souls who collectively and holographically construct space, time and matter from our home in the frequency domain via the use of ontological Fourier Mathematics). These human lies run the gamut of insanity, but the most popular ones are today told by the sophists of scientific materialism and the confidence men and women of story book religions. The exact reason for all of the ills currently afflicting humanity is that human beings in general have chosen to listen to the innumerable human liars rather than the Universe itself.

This book shows us that humanity will never know peace nor progress until it stops following ALL irrational ideologies and ALL liars. It shows us that if humanity is going to have a future of unity, optimization, autonomy, meaning, reason, logic, health, happiness, merit, progress, excellence, quality, intelligence, wisdom, altruism, and equal opportunity for all, then it is going to have to become one with the Universe. And becoming one with the Universe is of course the same thing as becoming one with ontological mathematics.

Read this book by the Pythagorean Illuminati today and take your first step on the road to ontological mathematical GNOSIS.

RK (MK)
5.0 out of 5 stars Not Alone.
Reviewed in the United States on November 21, 2019
Verified Purchase
This brief, intuitive and practical book will guide you towards greater self-awareness and increase your sense of connectivity and community within the Cosmos. Check it out. It's food for your mind and spirit!
Read more
One person found this helpful
Helpful
Report abuse

Helena Dreamweaver
5.0 out of 5 stars Positive and uplifting message!
Reviewed in the United States on July 25, 2019
Verified Purchase
Humankind must wake up to its universal connection.
Another excellent book by the Pythagorean Illuminiati.
Read more

Amazon Customer
5.0 out of 5 stars Great Book!
Reviewed in the United States on November 27, 2019
Verified Purchase
There is no such thing as a coincidence and it is not a coincidence that I found this book! I feel so much more in tune with the universe, and I’m going to pay much more attention to the synchronicities in my life. I highly recommend this book to anyone feeling disconnected and alone. You are not alone.
Read more
One person found this helpful
Helpful
Report abuse

Andrew Samaha
5.0 out of 5 stars Practical. Indisputable Truth
Reviewed in the United States on August 23, 2019
Even though the latest books I’ve read in these series are shorter I find that they are worth it and better to me. They get to the point and don’t focus and linger on the absurdities of scientific materialism as much. Highly recommend even if worried about price for length.

This one is highly practical in that you receive more direct advice in proportion for changing your life and making a difference. Easy for me to understand this advice as as I was a child this is how I operated. Nice to hear the reasoning behind the universe’s workings with a why for how it operates like it does (teleologically ). I can see how it can be no other way. Meaning is literally technical

I am helped in understanding these new releases by my prior readings on the subject.
Read more
3 people found this helpful
Helpful
Report abuse
See all reviews

MPC 500
5.0 out of 5 stars Are you listneing?
Reviewed in the United Kingdom on November 13, 2019
Verified Purchase
Take your head out of constant social media mind numbing posts, turn inward and listen for once. The universe has the answers but most do not take a moment to listen. Our individual minds are all connected to all that has been, individually and collectively but we must tune into the universe like our ancient ancestors used to instead of a constant barrage of mindless carp on our phones and tv's. Expand your consiousness, reconnect with the unconscious.
Read more
Report abuse

MP
5.0 out of 5 stars Game Changer
Reviewed in Canada on June 30, 2020
Verified Purchase
This book changed my perspective of life at a level unexpected. I can now understand clearly things previously mysterious and out of reach.

Trust me not, read the book!
Then you'll know if you can "Trust the Cosmos"