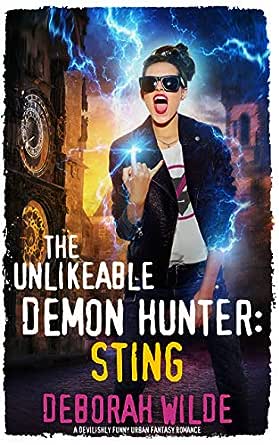 You've subscribed to Nava Katz! We will preorder your items within 24 hours of when they become available. When new books are released, we'll charge your default payment method for the lowest price available during the pre-order period.
Update your device or payment method, cancel individual pre-orders or your subscription at
Your Memberships & Subscriptions
There was an error. We were unable to process your subscription due to an error. Please refresh and try again. 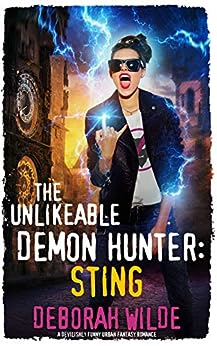 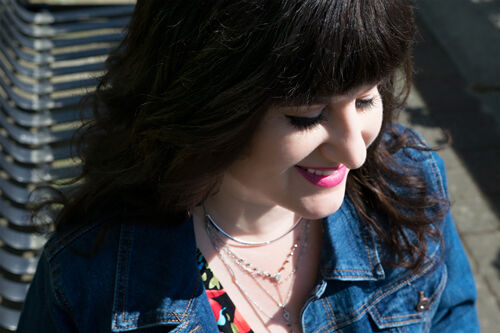 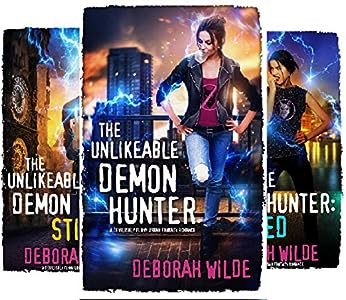 "I didn't think Deborah Wilde could repeat the success of book 1 in this series but somehow she did. Fantastic plot, characters, snarky dialogue and all. I'm actually giving 5 stars out two books in a row for a series and I don't remember ever doing that. Go figure. Better yet, go get these books." - The Mysterious Amazon Customer

"Chock full of complicated and total visual butt-kicking, sensual push and pull swoons, crass clever and crude hilarity ... STING -- book two in the Nava Katz series -- was a definite win for me and a solid follow up to book one. No middle book syndrome here, folks!" - HJ, Reviewer, Amazon

"My favorite urban fantasy series so far this year." - Uncaged Book Reviews
"Nava Katz is the funniest, bad-a$$, hot mess of a demon hunter you could ever want to meet." - Sunnyles, Reviewer, Amazon.

A global wanderer, hopeless romantic, and total cynic with a broken edit button, Deborah writes urban fantasy to satisfy her love of smexy romances and tales of chicks who kick ass. This award-winning author is all about the happily-ever-after, with a huge dose of hilarity along the way.

"It takes a bad girl to fight evil. Go Wilde." deborahwilde.com
Winner of the 2017 Raven Award for Favorite Urban Fantasy

4.6 out of 5 stars
4.6 out of 5
257 global ratings
How are ratings calculated?
To calculate the overall star rating and percentage breakdown by star, we don’t use a simple average. Instead, our system considers things like how recent a review is and if the reviewer bought the item on Amazon. It also analyzes reviews to verify trustworthiness.
Top reviews

E. Nolan
3.0 out of 5 stars OK, You Have Issues, But Do Your Job!
Reviewed in the United States on August 2, 2017
Verified Purchase
Having been dragooned into the Demon Hunter brotherhood in book 1,
very much against both her and th Demon Hunters' wishes, Nava is on
her first official mission, to the Czech Republic. A popular Hollywood
actor/Media personality is theorized by the Brotherhood to be a
demon because of the unlikely havoc and body toll in his entourage.
The hunters must a) find out if it is true, and b) kill him if it
is. In the meantime, Nava's tenuous almost-relationship with the
most famous hunter is jeopardized by the appearance of said hunter's
semi-ex who seems to want to rekindle things. To make matters
worse, she's actually a nice person.

I did not enjoy this book as much as the first. We had entirely too much
of Nava obsessing on her relationship issues to the point that I never bought
her as an effective decoy for the suspect. She was supposed to be uber
slinky and seductive, but she was such a mess in her head that I never could
visualize her that way. I also had a major plot point problem with the
fact that as an aside to the main story we learn that a dragon demon has
apparently been killing *lots* of people in Prague. Given that the
movie star, if he is a demon at all, seems to work by playing up people's
weaknesses, not by overriding their free will and that his body count,
if it is his, is just in the dozens, it seems like the hunters should drop
everything and go after the dragon demon, but that doesn't seem to occur to
anyone.
Read more
7 people found this helpful
Helpful
Report abuse

Tina
5.0 out of 5 stars The Unlikeable Demon Hunter: Sting (read series in order!)
Reviewed in the United States on November 16, 2017
Verified Purchase
Just like book one, The Unlikable Demon Hunter: Sting was full of cheesy lines, bad puns, and over-the-top situations. I absolutely adored the fast paced, witty dialog--some of the one-liners are truly inspired. You'll love this series, or you'll be offended and not get through the first chapter (which is why I recommend reading the first chapter with a sample to see if it's to your taste). I'll be following this series to the next book!
Read more
2 people found this helpful
Helpful
Report abuse

RICK’s wife Ann
5.0 out of 5 stars Thoroughly enjoying the series
Reviewed in the United States on February 4, 2020
Verified Purchase
I really enjoy the stories. It’s a good plot line with engaging and realistic characters. I have found NO typos (yay proofreaders), nothing drives me crazier than using the wrong word, bad spelling, or wrong character. These stories are engaging and I hate having to put them down to charge my reader up.
Read more
One person found this helpful
Helpful
Report abuse

Helen Wawrejko
5.0 out of 5 stars Nava, Queen of snarky dialog
Reviewed in the United States on June 26, 2017
Verified Purchase
Unique storyline with superb worldbuilding. Nava the first female Rasha, a demon hunter by quirk of getting her twin brothers magic at his induction ceremony, leaves for Prague with Rohan and Drio to trap a demon. A clandestine trip to a person who can help her get her brothers magic instilled in him, has repercussions and a demon attack. This is an incredibly good paranormal. Great protagonist, snarky dialog, fast action paced story, hot build of a love story, angst. Wow, great twisty! Ending had a little cliffhanger. Best beginning of a book I've read in a long time. I voluntarily reviewed an ARC of this book.
Read more
Helpful
Report abuse

Hawaii Girl
5.0 out of 5 stars Fun Book
Reviewed in the United States on July 31, 2020
Verified Purchase
This is a light fun book with a strong and snarky female heroine. I liked the first book so much I have
bought the series and love the way the author writes. This is a perfect set to read and forget the
pandemic for a while.
Read more
Helpful
Report abuse

Rose Miller
5.0 out of 5 stars Can't wait for the next one!
Reviewed in the United States on June 29, 2017
Verified Purchase
I loved the first book in this series and I hoped I would enjoy this one as much - I did! I was immediately pulled back into Nava's crazy action-filled life. I couldn't put the book down until I finished it. Nava is someone I think many of us would like to be. Snarky, sexy, strong, smart, she's got it all and the guys she "works" with are great too. Can't wait for the next one!
Read more
Helpful
Report abuse

Amanda498
5.0 out of 5 stars OMG- the ending!!!
Reviewed in the United States on July 8, 2017
Verified Purchase
This book was so much fun to read. I loved watching Nava's growing pains in her new role as demon hunter. Her devotion to her twin and her conflicted feeling toward Rohan had me both cheering and cringing at times. And really, the ending- I got the feels and am dying for book 3.
Read more
One person found this helpful
Helpful
Report abuse

Kindle Customer
5.0 out of 5 stars This is some of the best fantasy Ive read in a long time!
Reviewed in the United States on June 16, 2019
Verified Purchase
I purchased Vols 1 - 3 because another favorite author of mine recommended it and I was not disappointed! Demons, witches, things that go bump in the nite, yet our huntress is a flawed human like the rest of us. She's funny, cheeky and brave, too! I guarantee you won't be disappointed
Read more
Helpful
Report abuse
See all reviews

becky
5.0 out of 5 stars Hmmmm 😓
Reviewed in the United Kingdom on November 14, 2017
Verified Purchase
I really really enjoyed book one but book two had me sweating. It was intense in places where you didn't know what was coming next emotional rollercoaster comes to mind. Lots of twists and a few cringe moments where you just think Nava noo!!. Not sure if i'll read book 3 I like I'm not big on more than one love interest and book 2 and by the sounds of it book 3 are all about other love interests popping up and that to much drama for me I think 😕 but then again I do love Nava and Ronan 😍. I'm left with mixed feeling buuuuut I'll still leave 5 stars as all the characters are great and I love the main storyline.
Read more
Report abuse

The relationships are developing further, getting to know the other hunters, and how they work together and not at all at times.

Nava's first demon hunting mission is a roller coaster ride of emotion and a serious test of her skills and her relationship with Rohan. This story is fast-paced, action-packed, with plenty of twists and turns to keep the excitement going.

If you are like me, then you will be rushing to pick up the next book to find out what happens next.
Read more
Report abuse

Kindle Customer
5.0 out of 5 stars Better by miles when compared to the first book - absolutely wonderful read
Reviewed in the United Kingdom on November 16, 2017
Verified Purchase
Fabulous! So much better than the first book. Her first assignment is to see if a celebrity mogul is a demon and what kind has all sorta of obstacles thrown in her way. Not least being her lover's first love. Add in that she is trying to get information on the ritual that will make her brother a full demon hunter. Will she succeed or will she fail? She is even more sassy, gutsy, loud-mouthed and cocky in this book. The other characters are brilliantly portrayed in full multilayered colour whilst the plot has you lurching from one situation to another. A really terrific ride.
Read more
Report abuse

Lorrie
5.0 out of 5 stars Super read
Reviewed in the United Kingdom on June 28, 2017
Verified Purchase
I read the first book with great enjoyment and pre-booked book 2. My greatest criticism is that I wish the books were longer so that I could enjoy them more!

I love all of the characters who are individuals with quirks and strengths. The storytelling is fast paced and the demons deserving of everything they get.

EllieWC
4.0 out of 5 stars Go girl!
Reviewed in the United Kingdom on November 4, 2017
Verified Purchase
Next in the Nava Katz series and we have some new issues with the female demon hunter. Was she really meant to be chosen? Why not her brother?

This story is a good follow-up to the excellent first book in the series. I like the character of Nava and find her issues quite believable.
Read more
Report abuse
See all reviews