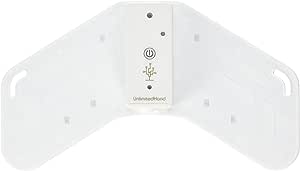 by UnlimitedHand
2.3 out of 5 stars 2 ratings
| 4 answered questions
Currently unavailable.
We don't know when or if this item will be back in stock.

UnlimitedHand, is a Haptic Game Controller designed to be used with Virtual Reality. The device grants wearers the ability to interact with virtual environments through touch. Experience the ricochet of a pistol, a bite from a zombie, or a brittle peck from your pet falcon. UnlimitedHand advances gameplay by unraveling a new category of affordances for virtual objects and characters.

Reach out into the Game World!

UnlimitedHand simulates “a sense of touch” for virtual reality gamers by a combination of motion tracking and haptic feedback technologies. Granting wearers intuitive control over virtual environments, virtual objects can now be felt and characters interacted with. The device tracks arm, hand and finger movements as input, while passing functional electrical stimulus and vibrations as output. This exchange of data is done wirelessly through bluetooth, allowing in-game maneuvers to be performed without restraints.

Developers can immediately hack away at the device with Arduino and Processing Libraries provided. Experiment with haptic-enabled games by using our Unity and Unreal Engine Plugins. You’ll be invited to a developer’s forum where we provide detailed tutorials and help with your projects.

In VR, we are more than spectators. Be prepared to experience the impact of a gunshot, or the bite of a zombie!

Advances VR gameplay by unlocking a new category of affordances to virtual characters.

Had enough of the virtual? Step back to everyday life, experiment with robotics, household appliances and more.

We strive for a world where sensations are shared not only with virtual characters, but with robots and fellow humans too.

Describe your product in 3 words.

In virtual reality, we believe there is more to immersion than being a mere spectator. The idea for UnlimitedHand came about when we decided to introduce a dimension of “touch” to VR with our expertise in Functional Electrical Stimulus.

Not only is the device capable of tracking hand movements, it also triggers them by exerting mild electrical stimulus to the wearer’s forearm. The wearable also features a strap-on-and-play design leaving the inherent dexterity of the hand undisturbed.

What has been the best part of your startup experience?

In our demonstrations, we literally pass current into our guest’s forearms to trigger involuntary movements. From time to time, these stimulations would bring about sudden epiphanies for our guests, and they would begin ideating on the spot. As a technology startup, to be consistently inspiring developers who are passionate about their projects is where we want to be.

2.3 out of 5 stars
2.3 out of 5
2 customer ratings
How does Amazon calculate star ratings?
Amazon calculates a product’s star ratings based on a machine learned model instead of a raw data average. The model takes into account factors including the age of a rating, whether the ratings are from verified purchasers, and factors that establish reviewer trustworthiness.