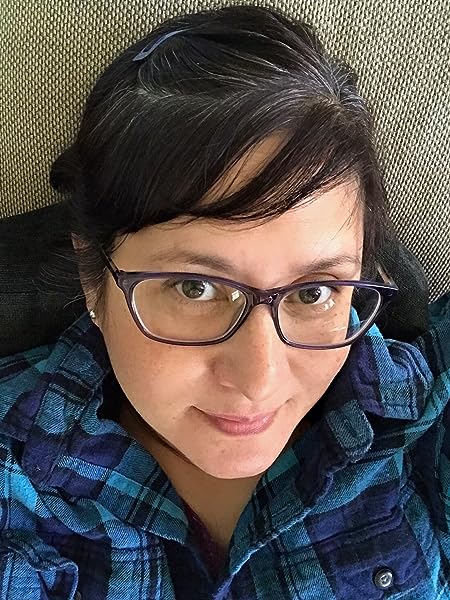 "EM Kaplan doesn't lead you gently into the pages of her fantasy novel Unmasked. Instead, she pushes you off a cliff and wishes you luck as you plummet head first into this action-packed story of a young woman named Mel who is desperately trying to find her place in the world that Kaplan has so artfully created..."
-- Mike Billington, author
Start reading on your Kindle in under a minute.

4.6 out of 5 stars
4.6 out of 5
49 customer ratings
How does Amazon calculate star ratings?
Amazon calculates a product’s star ratings based on a machine learned model instead of a raw data average. The model takes into account factors including the age of a rating, whether the ratings are from verified purchasers, and factors that establish reviewer trustworthiness.
Top reviews

Mike Billington author of Murder in the Rainy SeasonTop Contributor: Star Trek
VINE VOICE
5.0 out of 5 stars "Unmasked" is a 5-star read
Reviewed in the United States on April 17, 2016
Verified Purchase
EM Kaplan doesn't lead you gently into the pages of her fantasy novel "Unmasked."
Instead, she pushes you off a cliff and wishes you luck as you plummet head first into this action-packed story of a young woman named Mel who is desperately trying to find her place in the world that Kaplan has so artfully created.
The action starts right on Page One when Mel, who is in training to become a Mask, is kidnapped by a hulking, vaguely humanoid monster and carried pell mell through the woods toward an uncertain fate before she is rescued by a woodsman. From that point to the end of the novel the action never lets up and, for me, that's a good thing. The reason: In my experience too many fantasy authors spend too much time setting scenes and building worlds rather than just getting on with the story. Make no mistake, Kaplan has built an impressive world full of mysterious - and often misunderstood - characters but she does so in the context of the story, often while her protagonists are fighting for their lives. She doesn't waste chapters waxing poetic about the sun and stars: She does not, in other words, pause her narrative so she can dump a ton of information on the reader before moving on. As a result, the narrative maintains its headlong momentum allowing us, as readers, to learn about the world that Mel inhabits as she and the other characters make their way through it.
The characters are appealing, each in their own way. Mel is, for example, the daughter of a man and woman who are Masks - the mysterious arbiters of disputes and healers of the sick. She is also, however, a highly emotional young woman born into a culture in which people do their best to shun their feelings so they can better act as mediators. Ott, the woodsman who almost inadvertently rescues her, is the best friend of a man who will one day rule the far northern land where they both live. Together, they have spent weeks chasing the monster that later kidnaps Mel so they can wreak vengeance on it for the slaughter of some miners. Ott's friend Rob is the son of a manipulative and, ultimately, cruel ruler who has grown old, sick and - if possible - even more bitter. Jenny, Ott's sister and the object of Rob's unspoken affection, is trying to raise three children alone in the cold north.
And then there are the Trogs.
Are they monsters?
They certainly look and often act like they are but, at their core, are they actually something else?
Although it is a fantasy/adventure novel, "Unmasked" is more than simply that. It is also a romance and a coming-of-age story. We see some of Kaplan's young male and female characters fall in love - often with unexpected consequences - as they move through the pages of this novel. We also see them grow as they experience joy, betrayal, triumph, and defeat while fighting not only for their own lives but also the lives of their friends.
Her ability to weave so many interesting characters into this novel makes Kaplan, who also has two down-to-earth mystery novels to her credit, a pleasure to read. Her writing is top notch and her descriptions of people, places and events (including battles) are vivid and add, rather than detract, from the story.
The verdict: A great read for fantasy fans as well as those that are new to the genre and a book I highly recommend.

Laura
VINE VOICE
3.0 out of 5 stars 2.5 Star Rating
Reviewed in the United States on December 9, 2018
Verified Purchase
I give this a solid 2/5 star rating.
First off, I loved the storyline. The MC was a unique woman with many talents yet still soft and caring when needed. She wasn't all hero badass but still very likeable.
The reason for my rating was because I found the plots so slow moving. It was really hard for me to keep pushing forward and finish it but I did anyways. There were also parts to the book that could have used more explanation than others as well as some editing needs. For example, I would have enjoyed more explanation for Col Rob and Rob's portions of the novel and less descriptions on the land and trees, etc. That's just one example.
If you don't mind slow moving plots and lots of details on general things verses the people and the plots then you'll enjoy this.
At the moment, I'm not sure if I'm able to continue forward.
Read more
Helpful
Comment Report abuse

The main concern for me was the plot twist at some instances in which EM revealed the outcome of some conflicts cutting short the heavy suspense that is heavily to blame for my interest in the book!
One of these instances involved the revelation of Rob Cool’s killer, Guyse; before it actually became a concerned to the parties who accused Rob of killing his father! The revelation of the offender would have served the plot of the story better by building on suspense. As such, the plot twist would have been more interesting 
All the same, I enjoyed the ride meeting masks, Mel and her friends and of course the Trogs apocalypse!
And there grab your copy and watch out for the trogs!!!
Read more
One person found this helpful
Helpful
Comment Report abuse

Tina
5.0 out of 5 stars Unmasked, first of series
Reviewed in the United States on December 27, 2017
Verified Purchase
I downloaded Unmasked as a free book from Amazon. Here's a story which surprised me with great characters, fast-pacing, and unique world-building. I enjoyed the main protagonist, Mel, and her internal struggle to fit into Mask society. A lot of small sub-plots keep the action going and invest the reader in multiple secondary characters. There were some areas that could have benefited from additional depth or background, but overall this tipped more toward 5 stars than four...I'll admit to being curious about more books in this series, also.
Read more
One person found this helpful
Helpful
Comment Report abuse
See all reviews from the United States

Gus
5.0 out of 5 stars Great fantasy with action, mystery and romance
Reviewed in Australia on August 16, 2015
Verified Purchase
Unmasked by E M Kaplan was an intense read. This fantasy world was a compelling read, with love able and horrible characters that came to life. Lovely romance intertwined with mystery. The author is a wordsmith to the highest degree. I constantly found myself looking up new words I had never heard of.
This is a 5 Star read, but hard work on the brain cells
Read more
Helpful
Sending feedback...
Thank you for your feedback.
Sorry, we failed to record your vote. Please try again
Report abuse

Zachary
5.0 out of 5 stars Em Kaplan rules
Reviewed in Canada on December 21, 2018
Verified Purchase
Em Kaplan rules, she wrote a masterpiece of suspense and awesomeness and everyone should read this book and continue with the series.
Read more
Helpful
Sending feedback...
Thank you for your feedback.
Sorry, we failed to record your vote. Please try again
Report abuse