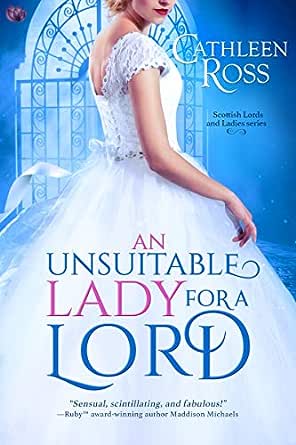 You've subscribed to Scottish Lords and Ladies Series! We will preorder your items within 24 hours of when they become available. When new books are released, we'll charge your default payment method for the lowest price available during the pre-order period.
Update your device or payment method, cancel individual pre-orders or your subscription at
Your Memberships & Subscriptions 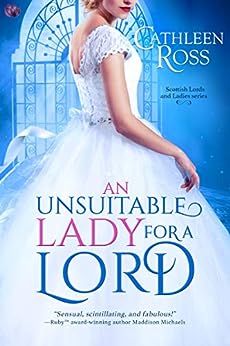 An Unsuitable Lady for a Lord Kindle Edition 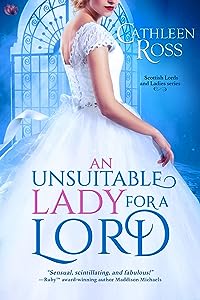 "Wow! This was an incredible story. The depth was fantastic and the emotions so real." -Mina V., Goodreads
"A witty and entertaining read with some scorching scenes. An entertaining first in a series." -Elodie N., Goodreads
"I was amused from the very beginning." -Alicia M., Goodreads
"This is a great read about two people who feel the same way about how life had led them. It's just a fun back and forth between the two as he can't stop thinking about her, and she is inspired by a man of wealth who understands her speeches." -Samantha A., Goodreads
"A highly enjoyable story." -Monica C., NetGalley
"An entertaining read with great dialogue between the main characters." -S.H., Goodreads
"The story is fast paced and often funny. It is a book filled with hope and joy. A great story with characters to love." -Suzette P., NetGalley

3.9 out of 5 stars
3.9 out of 5
25 customer ratings
How does Amazon calculate star ratings?
Amazon calculates a product’s star ratings based on a machine learned model instead of a raw data average. The model takes into account factors including the age of a rating, whether the ratings are from verified purchasers, and factors that establish reviewer trustworthiness.
Top Reviews

I enjoyed Cathleen Ross’ romance about the Scottish lord who wanted nothing to do with marriage but had to go through with something before his father ruined the dukedom with his spendthrift ways. His father keeps presenting him with suitable future duchesses—all with large dowries—but Aaron wants nothing to do with any of them. Through chance, he attends a lecture by a bluestocking woman with the oddest ideas—education for women and girls? Better pay for the fairer sex? And… The notion that women enjoy bed sport as much as men?? He’s intrigued. And he has an idea. If he brings Lady Crystal Wilding home to meet the folks, perhaps they would let up on him a bit. It never occurred to him that his one ally in the family—his grandmother—would take a shine to Lady Wilding, and set the marriage wheels in motion more than his father and mother ever did. A fun book that gave me all I look for in a romance.

Avid Historical Romance Reader
5.0 out of 5 stars A fun and absolutely delightful Regency romance
Reviewed in the United States on May 10, 2020
Verified Purchase
An Unsuitable Lady for a Lord is an absolutely delightful Regency romance with so much to recommend it. I adored Lord Lyle, the engaging swoon-worthy hero - a marquis who is torn between his duty (the need to follow his father’s directive and marry a high-born, wealthy young woman to save the family estate) and following his heart’s desire; he wishes to pursue an entirely unsuitable lady, Lady Crystal Wilding, a feisty, outspoken bluestocking who possesses unconventional views.

Lady Crystal, the daughter of a deceased Scots earl, is an independent young woman ahead of her time with an admirable goal - advocacy for women’s rights and improving the education of poor, working women in Edinburgh. She’s likable, relatable, and I really warmed to how passionate, strong, and focused she was. Aaron is enraptured with Lady Crystal as soon as he meets her, but as he gets to know her, I loved that he was so supportive of her cause. I also thought it was a great twist that Aaron was just as averse to loveless, arranged marriages as Lady Crystal.

If you love heartwarming Regency romance with rich and vivid historical detail, great banter, steamy love scenes, and an entertaining cast of secondary characters I can highly Cathleen Ross’s An Unsuitable Lady for a Lord.

As my first read by Mrs Cathleen Ross, it was a fun quick one. With a very modern lady and the man who accepts her as she is.
Crystal is not a woman of her time, she is a progressiste born decades and decades too early. Her talk of education for everyone is great, as her will to help less fortunate.
After giving free rein to her desires is clearly seeking ruin, even if the other party is willing to protect her.
While she thinks she is very educated, she is also very naive of the world around her, but she wants to help. After I still think it is very careless to believe by having an affair with a peer, she could walk free unscathed.
I liked Aaron, he refuses to be a pawn in his father’s game, looking to make a difference for his clan and others. Still, he does not hesitate to seek Crystal’s company, even ready to compromise her as he first wanted to sort her out of his system. So I didn’t know where to stand with him, a honorable man but with a dishonorable agenda, as whatever she tells, having an affair could be the end of her when he would not even be bothered about it.
It is a witty and entertaining read with some scorching scenes, but I would have liked the last third to be a bit more developed, to explore the white slave business, the fall of the villain threatening them, to see them in between his proposal and their wedding day...

4 stars for an interesting and entertaining first in a series, with some wits and compassionate even if flawed characters.

I was granted an advance copy by the publisher Entangled. I also preordered my own. Here is my true and unbiased opinion.
Read more
Helpful
Comment Report abuse

lynette williams
5.0 out of 5 stars a different storyline
Reviewed in the United States on May 8, 2020
Verified Purchase
this is a different story line from Cathleen Ross but one which won't disappoint the tale covers many topics which we take for granted --teaching girls how to read and right --to pick your own partner not the parents-the romance is also very good
Read more
One person found this helpful
Helpful
Comment Report abuse

Dreamreader
5.0 out of 5 stars Sizzling Historical Romance
Reviewed in the United States on April 13, 2020
An Unsuitable Lady for a Lord by Cathleen Ross is a charming historical romance wrapped up in powerful layers of equality and women's rights. Set in Scotland, Lady Crystal captivates Lord Aaron. He finds himself fed up with the marriage game and all the suitable candidates thrown his way turn him off. Meeting Lady Crystal and her unforgettable speech on desire changes him in ways that he never dreamed would happen...but he still is not willing to get married just to please his father.

I love the way author Cathleen Ross sets the scene again and again for the chemistry between the lovely lady and rebellious Lord. I do believe she showed rather than told. When Crystal starts teaching young ladies, I wished I was a fly on the wall for those lessons...Her heart is so big and she's so intelligent., I would like to see a second book added where one of her students is the heroine and we get to see the influence Lady Crystal has on her path. (Perhaps from the perspective of one of the slaves or someone who gets involved in their rescue?)

I feel like the writing could have gone much deeper with the ideas and speeches, the slavery trade - specifically white slaver which unfortunately still exists in our world today. My question is how, as a writer do you add that in without bogging the romance down between Lady Crystal and Lord Aaron? I will say that the chemistry sizzles! Very good character descriptions and good character development as well. If you feel like diving into a fun, historical romance, An Unsuitable Lady for a Lord is a great choice!

I received a free, temporary digital copy of An Unsuitable Lady for a Lord to read from NetGalley. As always, my opinion is my own.
Read more
One person found this helpful
Helpful
Comment Report abuse
See all reviews from the United States