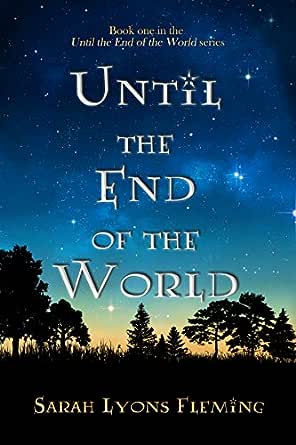 You've subscribed to Until the End of the World! We will preorder your items within 24 hours of when they become available. When new books are released, we'll charge your default payment method for the lowest price available during the pre-order period.
Update your device or payment method, cancel individual pre-orders or your subscription at
Your Memberships & Subscriptions
There was an error. We were unable to process your subscription due to an error. Please refresh and try again. 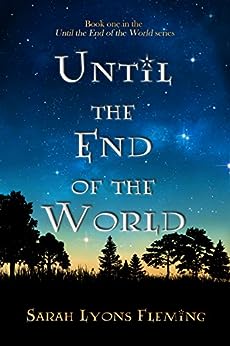 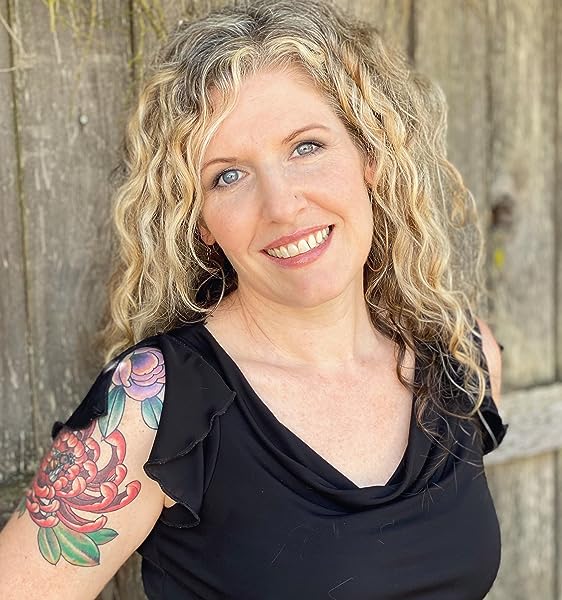 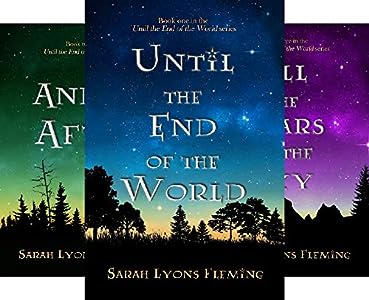 "This book is a journey, not just for its incredible cast of characters, but for the reader as well. TAKE THIS JOURNEY.
You won't be disappointed, if anything, you'll feel your heart expand, explode, and grow back bigger & better than before." -Love N. Books
"It's been days since I finished reading this book yet the characters and their story continue to resonate in my mind. I love this book enough to read it again, and for me to read a book more than once is almost unimaginable." -My Book Addiction
"Until the End of the World...is now up there with my ultimate indie faves like Angelfall by Susan Ee.
That means it get six stars out of five.
All I have to say is read it. I don't care if you don't like zombies. You'll like this book. It's that good." -Katie Hayoz, author of UNTETHERED
"Until the End of the World is riveting, emotional, and addictive. Fleming pulls no punches in this spectacular story of survival." -Shana Festa, Bookie Monster and author of TIME OF DEATH

I'm a Laura Ingalls devotee, wannabe prepper and lover of anything pre-apocalyptic, apocalyptic and post-apocalyptic--or anything in between. Add in lots of humor and some romance, and I'm in heaven.

Besides an unhealthy obsession with home-canned food and Bug Out Bag equipment, I love books and making artsy stuff. Born and raised in Brooklyn, NY, I now live in Oregon with my family and, in my opinion, not nearly enough supplies for the zombie apocalypse. But I'm working on it.

4.6 out of 5 stars
4.6 out of 5
1,169 global ratings
How are ratings calculated?
To calculate the overall star rating and percentage breakdown by star, we don’t use a simple average. Instead, our system considers things like how recent a review is and if the reviewer bought the item on Amazon. It also analyzes reviews to verify trustworthiness.
Top reviews

Debra Allen
5.0 out of 5 stars Very good first novel
Reviewed in the United States on July 31, 2013
Verified Purchase
I'll be honest. I got this book because it was free, about zombies, and of a decent length. While I'm confessing, I was a little afraid it was going to turn out to be a tad "girlie" for my tastes. (Yeah, I'm a girl--or the remains of one anyway--but I don't generally care for romances or what could be considered Chick Lit.)

But I digress. The point is that I'm glad I gave it a try. This is a good story. Yeah, there's some romance but it's not the main focus and there's plenty of good ol' zombie action--and it's the old time Romero-style zombies, which is only right and proper. I liked it enough that when I was about 90% done, I checked Amazon and was disappointed to find out this was her first book because I was really hoping to find a sequel.

The action scenes are good and clearly written. In a lot of books in this genre, sometimes I have a bit of trouble actually picturing the scene I'm reading. I had no such trouble with this book. Her descriptions of action, characters, and settings are very well done.

As with most books, espeicially first efforts, there are a few flaws but they didn't really detract from the overall story. I don't like to do spoilers so I'll keep it general. One of these is that I saw one aspect, relating to the main character, of how the book would end coming way back from nearly the very beginning of the book. It didn't ruin anything and I wouldn't even call it tiresome. I just found it a little obvious.

Another is that (How to phrase this without giving things away?) the group seems to have an awful lot of luck following even the most dire circumstances. Then again, I came to like all the characters so much that, while I didn't find it overly realistic at times, I couldn't really begrudge it much.

I would definitely recommend this book for you zombie fans. I liked it a lot and look forward to seeing more from this author.

Kelli
5.0 out of 5 stars Excellent start to a zombie series!!!
Reviewed in the United States on May 31, 2020
Verified Purchase
I truly loved this book.

Ultimately, there really isn't many scenes with zombie drama, or lots of guts and gore. Which I actually like to be included in my zombie novels, but it made no difference while reading this book. I love the apocalyptic zombie novels for 3 main reasons, excitement of the zombie genre, the character development and growth as you see them change as a result of living in a new scary world and the supernatural element if any is included.

In this book, it was all about the relationships and how this group of people were before the break out and who they became when faced with the end of the world. Some of the characters, specifically Ana and Peter, I wanted them to be left on the side of the road! But it was very fulfilling to read this book and see their transformation. I guess this book gave me hope and respect of people changing and becoming better people to protect those around them. There was hope for love and relationships to still go on. The Characters dealt with more violence from their fellow human survivors than the zombies in this book. I loved reading about their struggles and how they worked hard and worked together to overcome each fight and to make it to the safe zone.

I absolutely loved this book from beginning to end! I almost didn't need a second book to follow because I was 100% content with the story and it's ending. Thank you!
Read more
4 people found this helpful
Helpful
Comment Report abuse

Standee
2.0 out of 5 stars Totally Boring
Reviewed in the United States on January 2, 2019
Verified Purchase
I thought this was the stupidest book I’ve ever read, until I got through the first half. Hence, the reason for two stars instead of one, since we can’t give zero stars. However, it did improve in the second half, but was still pretty stupid. I hate saying ANYONES writing is stupid. I usually give them credit for writing a navel in the first place. This one was a complete waste of time and I couldn’t wait till it was over, but I did, as always. I realize many of the reviewers loved this book, but I can’t figure out why. It’s slow...very, very slow. Too much minutia that had nothing to do with anything. Characters are shallow. Dialogue unrealistic. I’m just glad it’s over, and in case it’s a series, I won’t be continuing.
Read more
5 people found this helpful
Helpful
Comment Report abuse
See all reviews

Sharon
5.0 out of 5 stars You don't have to love zombies to love this.
Reviewed in the United Kingdom on December 30, 2018
Verified Purchase
This is the book that started it all... my so far 3 year obsession with all things zombie. Trying to find a series to top it however has been so far fruitless, or brainless... this book and the following 5 books and novella cannot be matched. They will make you belly laugh, ugly cry, make new friends and life long enemies... Sarah Lyons Fleming has a gift. A gift that keeps on giving. I've never been so engrossed in a story... and it's a Zombie story I might add... that's what makes it so funny. This lady could make me read a stamp. Weather your into Zompoc or not to yourself a huge favour and give this a read/listen, the writing is beautiful. The relationships truthful and the full series worth the credits... 5☆'s.
Read more
One person found this helpful
Report abuse

RGW
3.0 out of 5 stars Very nicely written and engaging (but another zombie apocalypse?)
Reviewed in the United Kingdom on January 4, 2016
Verified Purchase
I got this book on a whim, didn't read too much description.

So I was a little dubious when I realized it was a zombie apocalypse story with a plot about a small group of survivors on the run. It didn't seem very original. That said, I have to say that I did enjoy this book and it's mostly because it's really well written. (Even though I also generally don't like first person, present tense for a narrative. But this author makes it work.) With all those curmudgeonly gripes I still stayed until the end because the writing is smooth and easy and the characters are believable and sympathetic, even when behaving badly.

I think the author has a real gift for story telling and I'd like to see her move into other kinds of stories.
Read more
2 people found this helpful
Report abuse

Tina Gillham
5.0 out of 5 stars This woman write phenomenal books
Reviewed in the United Kingdom on March 8, 2020
Verified Purchase
This writer was new to me until just recently, and has quickly become my favourite author. She writes people, not stories, she knows people well, and the ones in her books are friends of hers, and become friends of yours. She is the best, and this story is brilliant, You will love Sylvie, and all the others, read it, you will thank me for this.
Read more
Report abuse

Woodcutterfrog
5.0 out of 5 stars A cut above the average post apocalyptic story.
Reviewed in the United Kingdom on February 4, 2018
Verified Purchase
very well written with characters that are real and believable. The action is evenly spaced and involves plenty of Zombies as well as the inevitable rogue humans.
The main emphasis centres on a small group of survivors and their evolving relationships. Humerous in parts and gritty in others. A HEA is dangled at the end but one suspects dark clouds on the horizon. On to book 2 to see how dark they are.
Read more
One person found this helpful
Report abuse
See all reviews