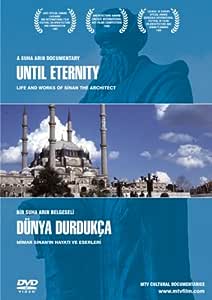 Until Eternity - Life and Works of Sinan the Architect

*** Attention: This DVD is in PAL (European) video format, therefore it can be played on a PAL compatible DVD player or on a computer DVD system.***

The "Until Eternity" documentary, which was prepared in commemoration of the 1988 International Mimar Sinan Year, reflects the life and works of the great architect. It is composed of six parts, each lasting half an hour.

Many experts in Arabic, Persian and Ottoman languages, architects, art historians and social antropologists worked for The Mimar Sinan Research Center which was founded within MTV for the preparation of the documentary. The Center mainly dealt with the life and structural activities of Mimar Sinan and held comparative studies on Ottoman administrators who lived in the same era while analysing the political, social, economical and cultural events in Europe and Asia. More than ten thousand information tags were prepared for this purpose.

The "Until Eternity" documentary was completed in a year and a half with shootings held in more than thirty provinces covering a total distance of 40,000 km within the Turkish borders. Shootings were also held in Greece, Hungary, Yugoslavia, the Soviet Union and Syria.