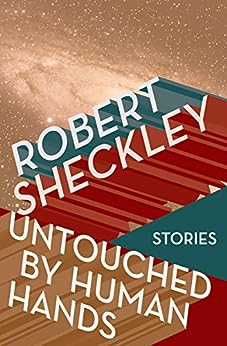 by Robert Sheckley (Author) Format: Kindle Edition
See all formats and editions
Sorry, there was a problem loading this page. Try again.
People hunt and kill one another as public entertainment and to win prizes in “Seventh Victim,” the short version of Sheckley’s novel The 10th Victim, which was made into a movie.

The twelve other stories in this collection are “The Monsters,” “Cost of Living,” “The Altar,” “Shape,” “The Impacted Man,” “Untouched by Human Hands,” “The King’s Wishes,” “Warm,” “The Demons,” “Specialist,” “Ritual,” and “Beside Still Waters.”

From the very beginning of his career, Robert Sheckley was recognized by fans, reviewers, and fellow authors as a master storyteller and the wittiest satirist working in the science fiction field. Open Road is proud to republish his acclaimed body of work, with nearly thirty volumes of full-length fiction and short story collections. Rediscover, or discover for the first time, a master of science fiction who, according to the New York Times, was “a precursor to Douglas Adams.”
Read more
Previous page
Next page

Mr. Sheckley-as might be expected of a writer who can wring praise from as diverse a group of peers as Kingsley Amis, Harlan Ellison, John le Carre, and J. G. Ballard-has an engagingly madcap manner all his own.

Sheckley has long been considered one of the genre's leading humorists.

-- "New York Times, praise for the author"
--This text refers to the audioCD edition.

Robert Sheckley (1928-2005) was a Hugo- and Nebula-nominated American author. First published in the science fiction magazines of the 1950s, his numerous, quick-witted stories and novels were famously unpredictable, absurdist, and broadly comical. In 2001 he was named an Author Emeritus by the Science Fiction and Fantasy Writers of America.

Susan Hanfield is an Audie Award-winning narrator who comes from a strong classical theater background and loves bringing deep characterizations to all of her work. She has narrated over twenty books, including Ru Emerson's six-book Night-Threads series. On camera, she has been seen commercially and in numerous international, national, and regional network spots. She also played the title character in Magdalene, an award-winning short film.

Gabrielle de Cuir, award-winning narration, has narrated over two hundred titles and specializes in fantasy, humor, and titles requiring extensive foreign language and accent skills. She was a cowinner of the Audie Award for best narration in 2011 and a three-time finalist for the Audie and has garnered six AudioFile Earphones Awards. Her velvet touch as an actor's director has earned her a special place in the audiobook world as the foremost producer for bestselling authors and celebrities.

Harlan Ellison (1934-2018) wrote and edited more than 120 books and more than 1,700 stories, essays, and articles, as well as dozens of screenplays and teleplays. He won the Hugo award nine times, the Nebula award three times, the Bram Stoker award six times (including the Lifetime Achievement Award in 1996), the Edgar Allan Poe Award of the Mystery Writers of America twice, the Georges Melies Fantasy Film Award twice, and was awarded the Silver Pen for Journalism by PEN, the international writer's union. He was named a Grand Master by the Science Fiction and Fantasy Writers of America in 2006.

Stefan Rudnicki first became involved with audiobooks in 1994. Now a Grammy-winning audiobook producer, he has worked on more than three thousand audiobooks as a narrator, writer, producer, or director. He has narrated more than three hundred audiobooks. A recipient of multiple AudioFile Earphones Awards, he was presented the coveted Audie Award for solo narration in 2005, 2007, and 2014, and was named one of AudioFile's Golden Voices in 2012.

Michael G Kurilla
4.0 out of 5 stars Eclectic collection of short stories
Reviewed in the United States on June 14, 2019
Verified Purchase
Robert Sheckley's Untouched by Human Hands is a collection of more than a dozen short stories that span sci-fi to the supernatural. They tend to be a bit quirky and offbeat, sometimes humorous, but always with a message for society at large. Of note, is the Seventh Victim concerning a future where killing is sanctioned in the form of a game that is voluntary. Players alternate between being the predator and the prey. Ten successful kills wins a prize. Sheckley presents this as a compromise for achieving peace when global destruction was within reach. This short story was later expanded to a novel called, The Tenth Victim and there is a film adaptation.
Read more
2 people found this helpful
Helpful
Report abuse

plasticrevolver
5.0 out of 5 stars More shorts from Sheckley
Reviewed in the United States on December 29, 2019
Verified Purchase
Another collection of twisted allegory from the great mind of Robert Sheckley. (Eight more words are required for this review.)
Read more
3 people found this helpful
Helpful
Report abuse

M. Holmes
5.0 out of 5 stars Written when science fiction was really good
Reviewed in the United States on June 5, 2013
Verified Purchase
I'm taken by Robert Sheckly's truly out of the box thinking, offbeat humor, and use of the genre to tell us about who we really are.

I find too much of today's science fiction to be cluttered with sex and excessive violence, which gets in the way much the same as today's movies focus on CG rather than story and character development.

We are told that we are products of our times. I think this means that a person from a given time period can't write quite like a person from another. The 1950's are a gold mine of great science fiction. Sheckly's work is a delightful and perfect example.
Read more
5 people found this helpful
Helpful
Report abuse

Allan Olexa
5.0 out of 5 stars I still really enjoy them 50 years later
Reviewed in the United States on February 10, 2016
Verified Purchase
I have read Robert Sheckley since a couple of my high school pals and I purchased Untouched from Scholastic Books at school then informally discussed each story. I still really enjoy them 50 years later.
Read more
5 people found this helpful
Helpful
Report abuse

Avid Reader
5.0 out of 5 stars Wonderful
Reviewed in the United States on September 30, 2011
Verified Purchase
This is a simply wonderful book of short SF stories written in the classical period. I believe Sheckley was just 18 when he wrote these stories. It's his first published book and probably his best. If you enjoy the golden age of classical SF, buy this book and hold onto it.
Read more
6 people found this helpful
Helpful
Report abuse

Adam Suskiewicz
5.0 out of 5 stars Classic s-f.
Reviewed in the United States on February 1, 2017
Verified Purchase
Classic s-f. I feel unworthy to write a review for such a great author :-)
Read more
3 people found this helpful
Helpful
Report abuse

wheresamber
5.0 out of 5 stars Untouched by Human Hands
Reviewed in the United States on December 1, 2011
Verified Purchase
The book was a gift and arrived quickly...and as described.
Priced very inexpensively and was a good experience. I would happily recommend.
Read more
2 people found this helpful
Helpful
Report abuse
See all reviews