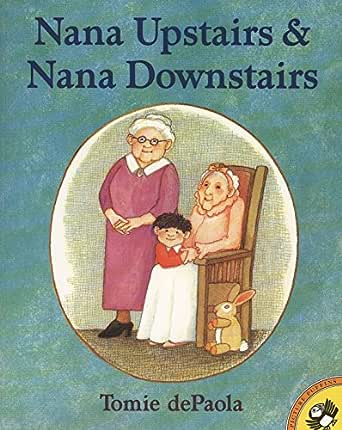 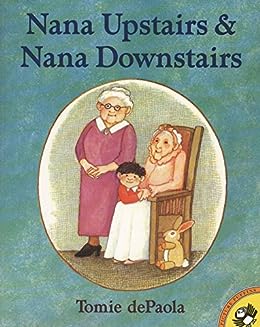 Full-color pictures, newly created by the author 15 years after the book's original publication, add to this spirited true story based on dePaola's childhood memories of his grandmothers. Fans of his Newbery Honor book 26 Fairmount Avenue will recognize these winning matriarchs. Ages 3-7.
Copyright 2000 Reed Business Information, Inc. --This text refers to the paperback edition.

Ages 3^-7. Originally published in 1973, this autobiographical picture book was one of the first to introduce very young children to the concept of death. Given its graceful treatment of a difficult subject, it has been a parental staple ever since, and a new generations of readers will be glad to discover this timeless tale in a lovely new edition. In an appended note, dePaola says he approached this project "as a completely new book." Thus, the format is larger than formerly, the pictures have been re-done in full color, and even the text has been slightly modified, though the story remains the same: every Sunday four-year-old Tommy's family goes to visit his grandparents. His grandmother is always busy downstairs, but his great-grandmother is always to be found in bed upstairs, because she is 94 years old. Tommy loves both of his nanas and the time he spends with them. He is desolate when his upstairs nana dies, but his mother comforts him by explaining that "she will come back in your memory whenever you think about her." Although dePaola's book is a nostalgic tribute to his own family, its theme--that not only people but our love for them survives in our memories--is universally true and important. Michael Cart --This text refers to an out of print or unavailable edition of this title.
Read more

4.6 out of 5 stars
4.6 out of 5
144 customer ratings
How does Amazon calculate star ratings?
Amazon calculates a product’s star ratings based on a machine learned model instead of a raw data average. The model takes into account factors including the age of a rating, whether the ratings are from verified purchasers, and factors that establish reviewer trustworthiness.

aaron torrence
5.0 out of 5 stars excellent book to help with loss
Reviewed in the United States on November 17, 2019
Verified Purchase
i got this book back in 1983 when i lost my great grandma. i was exstatic to find it again and the only thing different from then was mine was hardcover nothing else changed !
Read more
3 people found this helpful
Helpful
Comment Report abuse

ChristineMM
TOP 500 REVIEWER
5.0 out of 5 stars Wonderful!
Reviewed in the United States on February 13, 2004
Verified Purchase
This is a wonderful tale of a 4-year-old boy's close relationship with his 94-year-old great-grandmother. His great-grandmother lives in the upstairs bedroom of the house with his grandmother and grandfather, who play a lesser role in the book. The little boy has a weekly routine of visiting "Nana Upstairs" and sharing mints with her. It is nice to see an elderly person being cared for in the home of relatives rather than in a nursing home! She is so frail that she can't sit upright unassisted, so she is tied into a chair. Don't worry; this is not a scary thing! The little boy also insists on being tied in, so they can be alike. Eventually Nana Upstairs dies. This is not over dramatized and my children were not upset about this, perhaps because the boy is comforted when he sees a falling star in the sky and thinks it is a sign that Nana Upstairs is sending him a kiss. Years later we see the boy as an adult and we find out that Nana Downstairs has died, and he sees another shooting star and is again comforted.
This is a lovely picture book representing a strong bond between a grandparents and their grandson. If you enjoy this book, you'll also like Tomie DePaola's "Now One Foot, Now the Other".
I learned of this book by reading an analysis of it in the book "Inside Picture Books" by Ellen H. Spitz, which is a very detailed analysis of the content of picture books focusing on themes of bedtime, separation, grandparents, death, children's behaviors/manners, and a child's self-concept and self-esteem.
My 3 and 6 year old sons love the book as do I! We originally borrowed it from the library but this is one we'll have to buy so I can keep up with their repeated requests for it!
The older version has pictures in pink, tan, and black. The new version has more colors in the illustrations. Both versions are illustrated by Tomie DePaola.

margie
5.0 out of 5 stars Grandpa is gone, my children.
Reviewed in the United States on February 15, 2010
Verified Purchase
This book teaches the young and old alike about ageing, compassion, and sharing time with family.
In this touching ture story dePAOLA tells of losing a great grandmother. At the age of four he shows compassion and love for a disabled grandmother, sharing special time tied into their chairs sucking on peppermints, talking, and playing games every Sunday afternoon. The illustrations tenderly show his surprise at finding her room empty and his moment sitting by himself on the floor hugging his knees, crying softly.
In our family four grand children under the age of nine (three under the age of six) lost their grandfather. Our family used this story to talk about the empty space left, that it is okay to feel sad (a sadness we all felt), and to remember good times we had spent together. 4 months later we still talk about our feelings through references to different illustrations in the book.

cn/mn
5.0 out of 5 stars Great story and lessons of life
Reviewed in the United States on April 5, 2020
Verified Purchase
The story is the same but the drawings have been updated. Easy way to teach about life and how everyone ages and passes.
Read more
Helpful
Comment Report abuse

Margaret
5.0 out of 5 stars Wonderful children's bpon who .ay be experiencing death of a grandparent fir the first time.
Reviewed in the United States on August 28, 2019
Verified Purchase
I loved the simplicity of this story and how it gets the message across for children to understand.
Read more
Helpful
Comment Report abuse
See all reviews from the United States