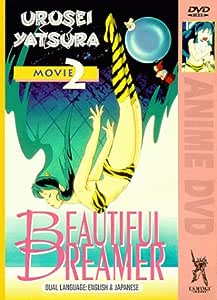 Originally released in 1984, the second Urusei Yatsura feature offers characters created by Rumiko Takahashi (Ranma 1/2) and a screenplay and direction by Mamoru Oshii (Ghost in the Shell). As the perpetually lecherous Ataru and his friends prepare for a carnival at Tomobiki High School, they gradually realize the days are literally repeating themselves. Any effort to break the pattern dumps them back where they started. They later discover their town has been reduced to a circle of land a few miles across, poised on the back of a gigantic sea turtle--a reference to "Urushima Taro," a Japanese Rip Van Winkle story. Takahashi and Oshii weave elements from other Japanese folk tales into their science fiction adventure. Although she's described as an alien princess, Lum has many of the attributes of an oni (demon), including horns, the ability to fly, and a tiger-skin costume (although hers is a bikini). The character designs reflect an interesting moment in animation history, when the influence of Western TV shows was giving way to the familiar anime style. Lum has large eyes and long viridian green tresses, but Ataru and his pals sport more Caucasian-looking hair and features. Unfortunately, the good-natured story runs out of steam after about an hour, and the film falters to a conclusion in an annoying series of false endings. Unrated; suitable for ages 12 and up: minor nudity, profanity, and cartoon violence. --Charles Solomon