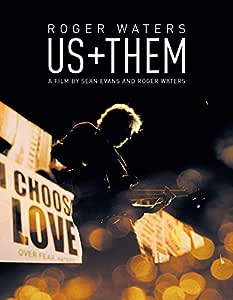 ROGER WATERS: US + THEM, chronicles the acclaimed 2017-2018 tour of the iconic Pink Floyd artist. As the founding member, lyricist, composer and creative force behind Pink Floyd, US + THEM presents Waters powerful music in stunning form and highlights its' message of human rights, liberty and love. Based around his acclaimed, sold-out US + THEM worldwide tour of 2017-18, comprising a total of 156 shows to 2.3 million people across the globe, it features classic songs from The Dark Side of the Moon, The Wall, Animals, Wish You Were Here as well as his most recent album, Is This The Life We Really Want? Waters powerfully demonstrates that he is at heart, a musical activist and one of the most passionate political commentators of his time. He has dedicated his life to fighting against those who seek to control our lives and destroy our planet. Welcome To The Machine and Another Brick In The Wall Part II, are a stark reminder of the bleak warnings that he gave decades ago about alienation, displacement, greed, suffering, destruction and loss. And yet the humanity of the songwriter cannot be more plainly seen than in Wish You Were Here, because, although he presents a grim picture of the state of the world, ultimately his message is one of hope through unity and love.

4.4 out of 5 stars
4.4 out of 5
26 customer ratings
How does Amazon calculate star ratings?
Amazon calculates a product’s star ratings based on a machine learned model instead of a raw data average. The model takes into account factors including the age of a rating, whether the ratings are from verified purchasers, and factors that establish reviewer trustworthiness.
Top Reviews

Kindle Customer
5.0 out of 5 stars Must watch for and Roger or Pink Floyd fan!
Reviewed in the United States on June 16, 2020
Verified Purchase
I seen this tour 3 times in person, this film did a great job capturing the feeling of being there. This has amazing visuals, the sound quality is top notch, it is must see if you're a fan of Roger Waters or Pink Floyd music.

This was the best show I've seen, out of the hundreds of concerts I've attended. I suggest anyone who can make it, go to Rogers next tour. He doesn't skimp on anything when it comes to blowing the crowds minds, visuals, the sound, the message... It is a life changing experience. If you can't make it, these videos will come very close to taking you there. Definitely a recommended watch!

Wicasta Lovelace
5.0 out of 5 stars Awesome As Ever
Reviewed in the United States on June 19, 2020
Verified Purchase
I saw this tour in Tampa, Florida in June of 2017, and was blown away. I hadn't seen Waters since 2000 on the "In The Flesh" tour and knew I couldn't pass up the chance to see him one last time. My wife wasn't able to go with my to Tampa, so it was such a joy to be able to finally share this with her. Honestly, I didn't know what to expect. I wasn't sure how it would translate to the screen. I mean, at one point the arena is split in two by a mock-up of the Battersea Power Station which was featured on Pink Floyd's "Animals" album. How does that translate? To my surprise, it translates very well. Some have complained about the concert footage switching to the on-screen visuals at times, but I didn't mind that at all. You're seeing Roger Waters. The imagery on the screens around him are as important as what's going on on-stage.

I would have to say that after I saw Waters in Tampa the nitpicky part of me thought that this band wasn't as technically capable as some of Waters' past touring bands, but I thought they played with a lot more energy. Now that I've had the opportunity to hear this music on my own home stereo, I believe this band blows away Waters' previous touring bands. This band played this music like it was their own, and this show simply JAMS. It may be true that these guys are not perhaps elite musicians like some of Waters' previous side-personnel, but I prefer them by far. There's power in this band.

I won't get into all the arguments about the imagery. If you know who Roger Water is, you should know what to expect. All I know is that the show I saw in Tampa, Florida almost two years ago was the most astonishing concert I've ever been to (and I've seen a lot, dating back to the 1970's). Having had the opportunity to revisit this tour, I can confirm that.
Read more
6 people found this helpful
Helpful
Comment Report abuse

Amazon Customer
1.0 out of 5 stars Dissapointed
Reviewed in the United States on June 26, 2020
Verified Purchase
I love Pink Floyd. Moreover, I love Roger Waters. The Wall live was the best concert I've ever been to. I saw Dark Side of the Moon and Wish You Were Here as well as solo tours. All amazing. This bored me. He only sings a bout 10 words for the 1st 30 mins. The back-up singer he has isn't as good as the guy on the last tour. It felt like I was watching a cover band that wasn't as good as Brit Floyd. And if I wanted to listen to 10 minute musical interludes, I'd go see Dave Mathews. And I hate Dave Mathews. I imagine being there live was a better experience, but as a lover of Floyd/Waters, this missed the mark. If you haven't seen it, rent Roger Waters: The Wall instead. Or go old school, pop on Dark Side with some sweet headphones and get high AF.
Read more
4 people found this helpful
Helpful
Comment Report abuse

Nick
5.0 out of 5 stars Solid show
Reviewed in the United States on June 27, 2020
Verified Purchase
Roger always delivers a great show. Several songs cut from the live performances but so much good stuff left. Stay tuned after the credits for some extras. If you're a fan then you know what to expect. But don't expect a show on the same scale as his previous release of The Wall as that was as much a stage show as it was a concert. This film features a handful of Waters solo songs and more Pink Floyd essentials.
Read more
One person found this helpful
Helpful
Comment Report abuse

Taper Jeff
5.0 out of 5 stars LOOKS CLEAR and SHARP in 4k UHD!!
Reviewed in the United States on June 27, 2020
Verified Purchase
I'm generally more of a physical media guy but when I saw it in UHD for a reasonable price I jumped on it. This looks extra GREAT in 4k! I love the whole thing but the Battersea Power Station "Dogs" and "Pigs" from the start of set two is worth the price for me all by themselves and the other two hours is all gravy IMHO!!

They also added "Comfortably Numb & "Smell the Roses" as extras after the main "movie" as well as the bonus feature, "A Fleeting Glimpse", a behind the scenes view into the tour. 👀
I really, really hope they add a SUPER DELUXE 4k UHD BLU-RAY package to the physical media options coming out in October. I know I'm not the only one that would purchase that!!
Read more
One person found this helpful
Helpful
Comment Report abuse

Steve Cas
4.0 out of 5 stars Absolutely Stunning
Reviewed in the United States on June 27, 2020
Verified Purchase
I'm like most Waters fans, I'm wicked picky! The visuals of this show (4K download) is Stunning! Absolutely stunning, and I don't use stunning often. The only complaint I have is that it isn't a whole show from front to back. There are some songs missing ( seriously? No Mother!) That and the no 4K gets it the 4stars
Wish the DVD would be released in 4k, because the sound and visuals of anything in 4K is insane, especially concerts.
Shine On
Steve C
Read more
Helpful
Comment Report abuse

Amazon Customer
5.0 out of 5 stars As Always, Nothing but Excellence
Reviewed in the United States on June 19, 2020
Verified Purchase
I caught the show in San Antonio and when he performed The Wall in Germany, he only seems to get better with age. Excellent show, especially the little 'making-of' documentary in the end with Comfortably Numb to cap it off in the end.
Read more
One person found this helpful
Helpful
Comment Report abuse
See all reviews from the United States