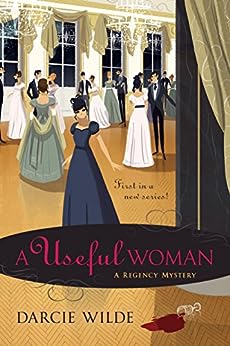 by Darcie Wilde (Author) Format: Kindle Edition
Book 1 of 5: Rosalind Thorne Mystery
See all formats and editions
Sorry, there was a problem loading this page. Try again.
Inspired by the novels of Jane Austen, this new mystery series set in 19th-century London introduces the charming and resourceful Rosalind Thorne, a woman privy to the secrets of high society—including who among the ton is capable of murder...

The daughter of a baronet and minor heiress, Rosalind Thorne was nearly ruined after her father abandoned the family. To survive in the only world she knew, she began to manage the affairs of some of London society’s most influential women, who have come to rely on her wit and discretion.

So, when artistocratic wastrel Jasper Aimesworth is found dead in London’s most exclusive ballroom, Almack’s, Rosalind must use her skills and connections to uncover the killer from a list of suspects that includes Almack’s powerful patronesses and her former suitor Devon Winterbourne, now Lord Casselmaine.

Torn between her old love and a growing attraction to a compelling Bow Street runner, Rosalind must not only unravel the mysteries surrounding Jasper’s death, but the mysteries of her own heart as well...
Read more
Previous page
Next page

Clever and witty. Wilde artfully portrays Regency London, from its ballrooms to Bow Street, in all its glory and hypocrisy, and provides readers with a heroine worthy of our attention. With its colorful cast and scandalous intrigue, A Useful Woman would surely have set the famed patronesses of Almack's atwitter.

Well-drawn characters and a perfect plot make this historical mystery a winner.

-- "Publishers Weekly" --This text refers to the audioCD edition.

Nancy Biffle
5.0 out of 5 stars Fxantastic
Reviewed in the United States 🇺🇸 on October 20, 2022
Verified Purchase
This was my first novel by Darcie Wilde. It certainly will not be my last. I’m usually able to figure out the guilty party quickly, but not this time. There were continual twists and turns with just the right amount of suspense and danger. There was a bit of romance that hopefully will be developed in the following books. I highly recommend this delightful Regency mystery.
Read more
Helpful
Report abuse

Nana
5.0 out of 5 stars A Useful Woman: Book 1
Reviewed in the United States 🇺🇸 on October 1, 2022
Verified Purchase
This is a very involved and interesting story of the life after being dismissed by the Aristocracy (Ton) of England. Rosalind’s father has left his wife and youngest daughter to survive alone in England after his forgeries and debts have caught up to him. This story shows the contempt that the Aristocracy of England has for anyone who has fallen on hard times whether of their own making or because of someone else’s doing. This story also shows that if an intelligent person can traverse the pitfalls of polite society, even in reduced circumstances, that the person can forge a life though this adversity.
Read more
Helpful
Report abuse

Eva maria
4.0 out of 5 stars It is a very amusing novel, a nice and easy read
Reviewed in the United States 🇺🇸 on September 25, 2022
Verified Purchase
Would recommend it as a summer beach read or a winter storm read .enjoyed it ,I really did.
Very nice
Read more
Helpful
Report abuse

Smith
5.0 out of 5 stars A good read
Reviewed in the United States 🇺🇸 on September 27, 2022
Verified Purchase
I liked this book a lot. Good writing and plotting, likeable and interesting heroine, good mystery. I will be buying more of the books in the series.
Read more
Helpful
Report abuse

Marty T.
5.0 out of 5 stars Very clever plotting & character development
Reviewed in the United States 🇺🇸 on September 11, 2022
Verified Purchase
I was initially hesitant to buy this, even at the sale price, but I read the reviews and they convinced me to buy, and I'm very glad I did. Just bought the second in the series and am looking forward to starting it.
Read more
Helpful
Report abuse

Elaine Archibald
5.0 out of 5 stars It’s been a long time time
Reviewed in the United States 🇺🇸 on September 6, 2022
Verified Purchase
Since I had to finish a book. I kept reading until I finished it. The story and the characters were so real and the “mystery “ well I’ll leave it this way
I never did figure it out.
Read more
Helpful
Report abuse

H. Bok
4.0 out of 5 stars Historical mystery readers rejoice!
Reviewed in the United States 🇺🇸 on October 10, 2016
Verified Purchase
The blurb for this book does it a disservice. Using the phrase “inspired by the novels of Jane Austen” raises a series of expectations that *A Useful Woman* is destined to disappoint. That’s unfortunate, because it’s quite a good novel for what it really is.

What it is, is a historical mystery. There are the usual *romanceus interruptus* elements that you find in mystery fiction today (but no marriage plot), there is mayhem, there are unanswered questions, there is an investigation, there is peril and an ultimate resolution. There is even some social comedy, though it is subservient to the plot and not an end in itself. Others have called the novel Heyeresque instead of Austenesque because it focuses on the Regency Marriage Mart, Almack’s. But again, it’s not a marriage plot story and doesn’t have a lot of humorous characters put in for pure amusement, such as you would find in Georgette Heyer’s novels.

Once I had gotten over focusing on what this book is not (didn’t take too long), I settled in to enjoy a well-conceived, well-written mystery novel. Rosalind Thorne is the daughter of a disgraced gentleman who maintains a tenuous position in polite society by making herself useful when life’s little peccadilloes threaten social disaster. She is a fixer of scandals, a manager of ambitious strivings, a taste maker. As such, she lives always on the knife edge of banishment from the only world she knows. I sympathized and empathized with her, admired her self-control and her ingenuity as she navigates this perilous course.

There is a murder, and not just Rosalind’s godmother but also the estranged love of her life seems to have some connection to it. The sister of the victim is virtually engaged to said love-of-her-life, and she asks Rosalind to investigate. It seems the only people who wish Rosalind well are the ones most likely to suffer from her inquiries. This is an elegantly constructed plot that really draws the reader into sympathy with the heroine’s difficulties—material, ethical, emotional.

I appreciated the wealth of research about life in London in the Regency, the many telling details that the author uses to make a larger point. (I never felt the author was throwing in factoids to show off.) The author deftly uses the intricate social rules of the *haut ton* to drive the plot; the dialogue is admirable for its elegance and restraint. I loved the use of de Quincey’s tongue-in-cheek essay “On Murder Considered as One of the Fine Arts” in the chapter epigraphs (though it’s an anachronism; the essay wasn’t published till 1827).

I am a bit of a purist about period language, so I did *not* love the many modernisms that slipped into the narrative; they jarred me out of the novel’s spell. There were also a few odd rookie errors, such as people addressing a duke repeatedly as “Lord Casselmain” instead of “Your Grace.” (Perhaps he could have been a viscount instead?)

But on the whole, this story took hold of my imagination on various levels and held me tight till the end. Some books start out strong and lose steam; others start in deceptive meekness and build to the end. I am happy to say that *A Useful Woman* is one of the latter. Am looking forward to the further adventures of Rosalind Thorne!
Read more
18 people found this helpful
Helpful
Report abuse

Bobbi
5.0 out of 5 stars Mystery well planned and executed!
Reviewed in the United States 🇺🇸 on September 12, 2022
Verified Purchase
A most admirable heroine, a dashing but somewhat flawed hero and you’ll never guess who did it!! Can’t put it down.
Read more
Helpful
Report abuse
See all reviews