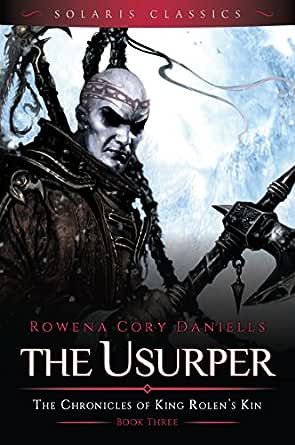 You've subscribed to The Chronicles of King Rolen's Kin (Solaris Classics)! We will preorder your items within 24 hours of when they become available. When new books are released, we'll charge your default payment method for the lowest price available during the pre-order period.
Update your device or payment method, cancel individual pre-orders or your subscription at
Your Memberships & Subscriptions
There was an error. We were unable to process your subscription due to an error. Please refresh and try again. 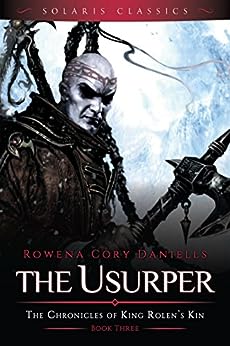 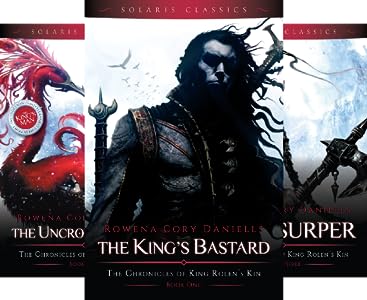 Rowena Corey Daniels is the renowned award-winning writer behind the The Outcast Chronicles and The Last T’en. She lives in Brisbane, Australia with her husband and children.  --This text refers to the paperback edition.

Charlene Turner
4.0 out of 5 stars Very good book
Reviewed in the United States on January 1, 2017
Verified Purchase
Well written, if a bit dark at times, great story twists, involving all the characters in the story. I will read the next in the series.
Read more
Helpful
Comment Report abuse

Nerine Dorman
4.0 out of 5 stars Ending needed some work
Reviewed in the United States on July 19, 2019
The Usurper (King Rolen’s Kin #3) by Rowena Cory Daniells sees me finally putting this trilogy to bed. I’ve got many thoughts about this epic, and they’re conflicted, so bear with me. Daniells starts out with all the elements that I love about a meaty fantasy trilogy – courtly intrigue, royal heirs thrust into unwished-for situations, treachery and a side order of the occasional fantasy beast. But…

I think she took a leaf out of the GRRM handbook but didn’t flesh things out nor develop her narrative arcs fully. So, while things started out promising (I really did enjoy book one and two) by the time we hit book three, I gained a nagging suspicion that she was pantsing her way through the epic without any clear idea of where or how to end.

There are so many promising characters and some lovely interactions, for instance friendships that develop in unlikely places (no, I’m not going to spoil it). I found myself enjoying those secondary arcs more than I did the primary ones, which all seemed rather standard (winning back the crown at all cost, etc etc).

I feel more could have been made of the theme of characters having to cope with the lot handed to them in life – Byren the reluctant king; Fin, the warrior monk who doesn’t have a shred of magical ability; Piro the princess who has all the magical ability but needs to keep it hidden… And while the writing is solid, I often felt that the point of view did not go deep enough – especially in terms of crisis situation which felt almost a little glossed over – I’m thinking of the ending in particular (you blink, and it’s over in a whiff of vapour). Too many conveniences – for instance, instead of executing someone you dislike the moment you lay hands on them, why then apparently starve them to death very publicly when you know they have sympathisers who’ll no doubt try to save them. (It feels too much like the Disney villain whose gloating ends up being his undoing.)

As much as I wanted to love Byren, there were times when I felt he was almost too trusting, too obstinately obtuse about the people and their feelings around him – not quite in the TSTL category, but verging very near to that. Not to mention his bungling of his friendship with Orrie.

I think what stole most of the joy of the story for me was the way it felt rushed towards the conclusion after events dragged out midway in the trilogy, as if the author had gone off on a bunch of tangents but then wasn’t exactly quite sure how to wrap them all together for a satisfying ending – but had to, within a specified word count. And it’s difficult. I understand all too well when writing merely one character’s narrative arc. And we’re sitting with not one but three point-of-view characters here. So, though I don’t want to lean on the GRRM reference too hard, it’s painfully apparent here. Added to that, the author flips between points of view rapidly, sometimes within a scene. Now, I don’t know if it was how the book was formatted (I was reading the ebook so don’t know if those spaces accimagically vanished during the final production) but I’d have liked some scene breaks indicated – I sometimes had to stop and go back a few sentences to realise we’d switched characters. And if no scene breaks, a better transition could have smoothed this out. Not a complete deal-breaker, because I don’t know if it is a formatting glitch, but if not…

I wanted to like this trilogy very much, and it had such a promising start, but I’ve been spoilt by so many more complex, textured and lush fantasy writing that this felt like something I may have enjoyed more when I was in my early teens. I know I’ve gone on a bit in this review, more than I ordinarily would, and King Rolen’s Kin is not a bad little fantasy trilogy, but it could have packed a stronger punch to conclude better at book three.
Read more
Helpful
Comment Report abuse
See all reviews

Amazon Customer
5.0 out of 5 stars twists and turns aplenty
Reviewed in Australia on July 17, 2017
Verified Purchase
I am really enjoying this series. the character development is great and the story moves along at a cracking pace. I would like to see more development of the magick system, there are always hints, but no real explanation of what it can do. It's almost like nobody understands it and everyone is afraid every time they use it. hopefully this will happen in subsequent books.
Read more
Report abuse
See all reviews