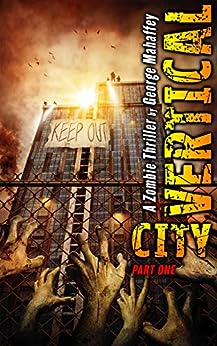 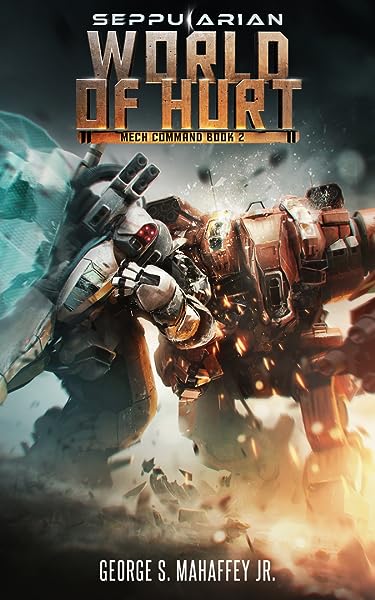 by George S. Mahaffey Jr. (Author) Format: Kindle Edition
Book 1 of 4: VERTICAL CITY
See all formats and editions
Sorry, there was a problem loading this page. Try again.
In the midst of a global pandemic, a group of evacuees are marooned atop a skyscraper in a major city after a terrible helicopter crash. Abandoning the streets to millions of hungry infected, the survivors seal off the structure at the 10th floor and string wires between it and other buildings to avoid being eaten alive by the hordes rampaging below. But dwindling supplies force those still alive to take greater risks as they struggle to survive hundreds of feet off the ground.
Read more
Previous page
Next page

Limited-Time Offer
3 Months FREE of Audible Premium Plus. Get this deal
All 4 for you in this series See full series

George S. Mahaffey Jr. is a lawyer, screenwriter, WGA member, and author. His script Heatseekers was bought by Paramount Pictures with Michael Bay producing and Timur Bekmambetov attached to direct. In addition, he's sold, written scripts, or developed scripts for Arnold Kopelson, Blumhouse, Benderspink, Mandalay, Sony, Barry Josephson, director Louis Leterrier and Paul McGuigan (among others), and is the creator of In The Dust, an action-horror graphic novel in the vein of 30 Days of Night to be published by Top Cow with art by Christian Duce. He has also written the following books: Amityville: Origins, Amityville: Revenants, Razorbacks I, Razorbacks II, Razorbacks III, The Devil's Ark, Familiars, and the Vertical City zombie series (Books 1-4). In addition, he is the author of the Mech Command sci-fi trilogy, the co-creator and co-author of the first five sci-fi books in the Syndicate Wars series (Seppukarian Universe), along with the post-apocalyptic thriller trilogy, Blood Runners. He lives in the Washington D.C. area with his wife and young son. For more info, see WWW.GEORGEMAHAFFEY.COM. You can also email George at gsm@gdldlaw.com

Carolyn Hertz
5.0 out of 5 stars A riveting different take on survivalist's methods in the time of zombies.
Reviewed in the United States 🇺🇸 on May 1, 2016
Verified Purchase
Vertical City, A Zombie Thriller Part 1 by George S. Mahaffey, Jr. is obviously about zombies. It does have a different take on the survivalist's methods. I gave it five stars. It's fast moving & edgy with action. I found it riveting.

Wyatt was three when the change took place. As he, his parents & some neighbors were escaping, his mother told him: "'Can you do something for me when we go through that door?' Another nod from me. 'Whatever you do, do not look down, okay? Keep your eyes on mommy. Do. Not. Look. Down.' For the first time real fear panged me & my eyes began to get misty as I caught sight of my father, a broad-shouldered man who'd never shown a modicum of emotion in all the time I'd known him, begin to weep. Whether he was crying for himself or us, or simply because the mini-empire he'd built was likely on the verge of collapse, I didn't know, but it hardly mattered."

They got into a helicopter but it crashed. They were trapped on a "concrete island as a struggle for survival raged below." They sealed the building off at the tenth floor & waited for help to arrive. None came. That was where they made their home. It had been sixteen years ago.

"Initially, the newly-risen dead were called 'The Woken' but then Del Frisco got tired of having to say the 'double u' in the first letter of 'Woken,' & shortened it to 'Dub,' & then the 'Dubs' (my suggestion) which is what pretty much everyone calls them now."

Wow! Read in one sitting, it went too fast. Now I'll have to purchase the other three parts.

I received a complimentary kindle copy from Amazon. That did not change my opinion for this review.

Mike Dio
5.0 out of 5 stars LORD OF THE FLIES meets WORLD WAR Z
Reviewed in the United States 🇺🇸 on May 4, 2015
Verified Purchase
I received “Vertical City” ahead of time to provide an honest review. It’s apparently part 1 of a 4-part series. There’s not much new ground to be plowed in the zombie genre, but this book does it, primarily because of the ingenuous setting. Instead of trying to outrun the zombies, the survivors of a plague decide to live ABOVE them. Not sure why someone hadn’t thought of this cool angle before, but this small group of evacuees crash-land (a la “Lord of the Flies”) on top of a building at the height of the crisis and then begin to colonize it and several other buildings, stringing wires between structures, using ladders, etc., all so that nobody has to set foot on solid ground (unless they want to) which is overrun by the newly-risen dead.

The hero’s a young building-climber who operates in a small “ledge jumping” team of grunts who swing between buildings to forage for useful gear, food, weapons, tools, etc., to be brought back for use by the community. This first book, Part 1, sets up the world and the dynamics that exist inside the main building “Vertical City 1,” and the other outlying structures. When the hero and his team-mates aren’t risking their lives evading the zombies (called “Dubs” here) or swinging on the wires that crisscross the buildings, they’re trying to survive and make their way in the different castes that exist inside the confines of the buildings (which have been sealed off at the tenth floor as a security measure against the zombie hordes). Book 1 was exciting and set up quite a bit of potential conflict between the characters (kind of reminding me of “Wool”) that I assume will only grow in subsequent books. Looking forward to Part 2.
Read more
6 people found this helpful
Helpful
Report abuse

I DRM Free
4.0 out of 5 stars Pretty good, can't wait to read the rest of them.
Reviewed in the United States 🇺🇸 on September 14, 2017
Verified Purchase
In Vertical City, a bunch of survivors of a zombie pandemic survive in a high-rise tower where they have formed a little city of survivors. Slowly building out toward nearby towers and fortifying them as well. This story is about young man who was 3 years old when the collapse occurred, now he is 19 and has a job scrounging other buildings and lower parts of buildings for usable material.

Vertical City is a fairly well written book, my problem is I have a very large vocabulary compared to most people. And the author uses some unique words that even I had never heard of, i was able to figure out what they meant by looking at the root and the surrounding sentence but to me this just stunk of somebody trying to sound smart. There were several mistakes I noticed in the novella.

I personally love Zombie books, so I plan on buying the sequels and reading them as soon as I can.
Read more
One person found this helpful
Helpful
Report abuse

Kewanna
5.0 out of 5 stars Great read!
Reviewed in the United States 🇺🇸 on April 4, 2017
Verified Purchase
What a surprise it was when I picked up “Vertical City.” Thinking it was your typical zombie book, I came to find that it was anything but. The book centers on a group of young survivors of a horrible plague that’s laid waste to the planet. The survivors are marooned on top of tall buildings in an unnamed city, forced to salvage scrap and supplies thousands of feet off the ground via a series of wires and cables and contraptions that they’ve constructed between and up and down the structures. Below and around them are hundreds of thousands of hungry dead and not only do the survivors have to worry about the zombies, but the leaders of their buildings, a group of outwardly sane former technology whizzes (think Silicon Valley castoffs – Elon Musk, etc.) who rule the buildings with an increasingly iron fist. The action was great as were the characters and what really set the books apart was the subversive theme that the people most would want to see lead in a time of crisis, technology geniuses and the like, might turn out to be your worst nightmare – perhaps even worse than the zombies. Great book!
Read more
One person found this helpful
Helpful
Report abuse
See all reviews

Ravie
4.0 out of 5 stars Good read, draws you in...
Reviewed in the United Kingdom 🇬🇧 on May 11, 2015
Verified Purchase
Good concept living in the "sky", albeit skyscrapers, no long prelude, straight to the story, which is told through Wyatt. However with all survivors in the buildings being stuck midway and living a somewhat confined life and no way of getting down, how are the survivors going to maintain the structural integrity of the skyscraper, and survive the zombies??
Read more
One person found this helpful
Report abuse

Kindle Customer
2.0 out of 5 stars Trail
Reviewed in the United Kingdom 🇬🇧 on May 23, 2015
Verified Purchase
An ok read the sky scraper refuge was new and intriguing ,a different way of looking at servicing however the staring book in the series was a slow start ,I hope the series progress at a faster pace too much talking not enough action
Read more
One person found this helpful
Report abuse

P. Fowler
4.0 out of 5 stars Good read
Reviewed in the United Kingdom 🇬🇧 on July 1, 2015
Verified Purchase
Quite a good start, and it's starting to get interesting my only problem is that was far to short. I don't mind paying for further instalments but not if they're as short as this book, sorry.
Read more
Report abuse

LA
3.0 out of 5 stars If you are stuck for someting to read.
Reviewed in the United Kingdom 🇬🇧 on July 31, 2015
Verified Purchase
Poor book really, there are much better 'zombie' books.
Read more
Report abuse

andrew brown
4.0 out of 5 stars Four Stars
Reviewed in the United Kingdom 🇬🇧 on September 6, 2015
Verified Purchase
It's OK. Let's see how the next book turns out.
Read more
Report abuse
See all reviews
Report an issue
Does this item contain inappropriate content?
Report
Do you believe that this item violates a copyright?
Report
Does this item contain quality or formatting issues?
Report