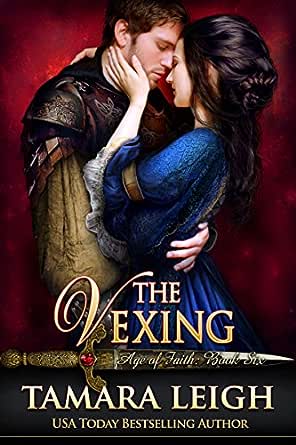 You've subscribed to Age of Faith! We will preorder your items within 24 hours of when they become available. When new books are released, we'll charge your default payment method for the lowest price available during the pre-order period.
Update your device or payment method, cancel individual pre-orders or your subscription at
Your Memberships & Subscriptions
There was an error. We were unable to process your subscription due to an error. Please refresh and try again. 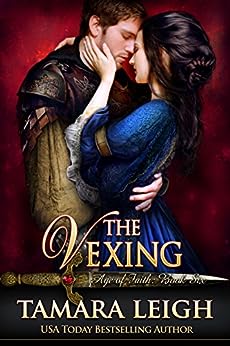 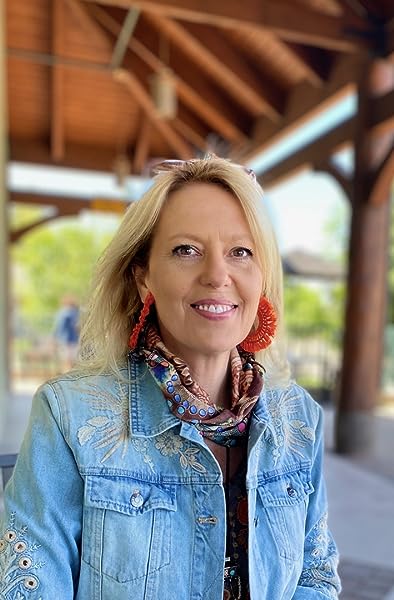 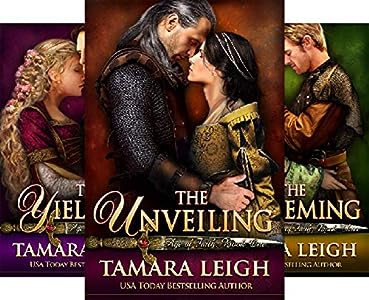 First published with Bantam, HarperCollins, and RandomHouse, Tamara Leigh is a USA Today Bestselling, Award-Winning author of more than thirty-five medieval and contemporary romances, including her AGE OF FAITH series. In late 2018, Tamara released Merciless, the first book in the new AGE OF CONQUEST series unveiling the origins of the Wulfrith family. Psst!--It all began with a woman.

First published with Bantam, HarperCollins, and RandomHouse, Tamara Leigh is a USA Today Bestselling, Award-Winning author of more than thirty-five medieval and contemporary romances, including her AGE OF FAITH series. In late 2018, Tamara released Merciless, the first book in the new AGE OF CONQUEST series unveiling the origins of the Wulfrith family. Psst!--It all began with a woman.

Tamara lives near Nashville with her husband, a German Shepherd who has never met a squeaky toy she can't destroy, and a feisty Morkie who keeps her company during long writing stints. Connect with her at: tamaraleigh.com, Facebook, Twitter and tamaraleightenn@gmail.com For new releases and special promotions, subscribe to Tamara Leigh's mailing list: tamaraleigh.com

AGE OF FAITH: A Medieval Romance Series
The Unveiling
The Yielding
The Redeeming
The Kindling
The Longing
The Vexing
The Awakening
The Raveling

THE FEUD: A Medieval Romance Series
Baron of Godsmere
Baron of Emberly
Baron of Blackwood

BEYOND TIME: A Medieval Time Travel Romance Series
Dreamspell
Lady Ever After

4.8 out of 5 stars
4.8 out of 5
144 global ratings
How are ratings calculated?
To calculate the overall star rating and percentage breakdown by star, we don’t use a simple average. Instead, our system considers things like how recent a review is and if the reviewer bought the item on Amazon. It also analyzes reviews to verify trustworthiness.
Top reviews

Readstil2AM
5.0 out of 5 stars Redemption, forgiveness, friendship, and love at their best!
Reviewed in the United States on May 15, 2017
Verified Purchase
Tamara does it again! Read this book and the entire Age of Faith series-you will not be disappointed! :)

Possible spoilers: I absolutely loved getting to revisit Sir Durand and see how the events of the past shaped him and how he chose to respond to his remorse over prior choices. His sincere regret and desire to change rang true throughout the story. I loved the way he loved Beata so selflessly (the letter, ah the letter). I loved the glimpses into the lives of the Wulfriths (only missed more of a visit with Garr and Annyn). The forgiveness extended to him by the Wulfrith family, and his reaction to it, absolutely melted me, and showed what remarkable people these (sadly fictional) characters are. I love them all and loved everything about this story. Thank you Tamara for creating such moving stories. I love the male characters you write, how they are fiercely protective of their ladies (swoon Sir Durand, just swoon), always strong and capable, but still considerate and able to show real emotion and treat the women and children in their lives well. I also love how your female characters are strong and smart without being ridiculous or lacking in common sense like so many heroines are written to be. I love that your love interests are honest and vulnerable with each other rather than refusing to admit their emotions until the last pages of the book. You also do a marvelous job of transporting us to the time period and making me wish I could step into that slice of time for a while, outdoor plumbing and all. :) And I know I just said love a million times, but thankfully I don't write for a living and can leave better word choices to the truly talented, haha!

Thank you for your beautiful stories-I can't wait to read the next two-the excerpts were excellent!!
Read more
11 people found this helpful
Helpful
Report abuse

noagnes
5.0 out of 5 stars Redemption, honor and love for a knight and a way to happiness for an independent-minded widow
Reviewed in the United States on May 18, 2017
Verified Purchase
Those familiar with The Age of Faith series will know Sir Durand's backstory (and I recommend reading the previous books before this one because the complex relationships between Sir Durand and the Wulfrith family is there in the background). This book is the long promised story of him finding happiness and redemption from his past sins, but his and his lady love's path leads through a lot of heartache and struggle between love and honor. The protagonists and the readers meet the Wulfrith clan members for various length and Sir Durand experiences that he has truly been forgiven by those he had sinned against which is a poignant experience, and that the heroine will believe in him in spite of gradually learning about his past.

I liked the way Beata's almost forgotten memory was gradually exposed and remembered, the triggers and the process of finding out the truth were quite realistic and intriguing (although the main point was foreshadowed enough to be guessed) I was happy to see Sir Elias from a previous book whose story I would also like to see written as well as the promised next book.
This book has somewhat less gore and blood and cruelty on stage than some of the previous books by the author, for which I am grateful. The protagonists' faith and prayer and striving to do God's will is clearly shown but not in an obtrusive and forced way.

I recommend this book (and the entire series) to any fans of medieval romance.
Read more
5 people found this helpful
Helpful
Report abuse

Susan Snodgrass
5.0 out of 5 stars Another Winner for This Series!
Reviewed in the United States on May 16, 2017
Verified Purchase
This is book six in Tamara Leigh's 'Age of Faith' series and follows Sir Durand. Although not a Wulfrith, as the other books feature, Sir Durand is a most noble knight. However, he has been through the rough, poor guy. This time around, he is given his own story and I was tickled to see that he had, too!

Sir Durand is charged by Queen Eleanor of Aquitane with escorting Lady Beata back to England to her faith post haste. However, peril falls upon them in more ways than one. Neither one is appreciative of the other and longs to be out of the other's company. Life has different ideas.

Will Sir Durand ever find love? Will he ever be appreciated for who he is? He has had hard times in the past, but he has learned from them and deserves to find true happiness with a woman who longs for him only and trusts his heart.

Lady Beata also has trouble in her past and pain as well. She, as well as most high born women of the era, the twelfth century, are married where they can do the most good for their families. She fears her father has called her home to marry her off to someone she will not like. Although a widow, she is called the Vestal Widow and she hopes that her fears will prove groundless.

Leigh has written another wonderful novel in this setting and the genre I most love, the medieval time period. I dearly loved catching up with the other Wulfriths from previous books. I believe this book can be read as a stand alone, but it would be best to read the series from the beginning to better understand the back story here. I have personally read The Age of Faith series twice and fully intend on doing so again. It's that good! Highly recommended.
Read more
4 people found this helpful
Helpful
Report abuse
See all reviews

Amazon Customer
5.0 out of 5 stars Five Stars
Reviewed in the United Kingdom on June 1, 2017
Verified Purchase
Good read, as are all the others in this series.
Read more
Report abuse

prairiechicken
5.0 out of 5 stars I love this series!
Reviewed in Canada on May 15, 2017
Verified Purchase
I'm an avid fiction reader. AVID! I read probably 200 books a year. Some books are awful, others are totally predictable, some are cheesy, and some have such shallow writing that I add them to my "don't bother with this one" list and delete them off my device. However, every book in this series seems to hold my attention through every page. It's been many books between this one and the last one I read in this series, and I'd forgotten how much I enjoy this author and in particular her age of faith series. In fact, when I finished The Vexing, I went back and downloaded the series again so I can start the whole thing over. 5 stars hands down!
Read more
Report abuse

Vicky Dedda
5.0 out of 5 stars ANOTHER WINNER
Reviewed in Australia on December 18, 2017
Verified Purchase
Once again Tamara weaves a beautiful medieval story of excitement intrigue and romance and once again we meet the wonderful Wulfrith family who I have grown to love and miss when I finish the book. I have to say this is probably the best series I have ever read. Not one of the books ever fails to meet the expectation of others previously read and more wonderful each book is stand alone and as I say with every review as I read these wonderful books, we meet the people we fall in love with in previous books. What a blessing these series are. I have pre-ordered book seven in this great Age of Faith Series. Thank you Tamara providing such wonderful reading.
Read more
Report abuse

Alisha
5.0 out of 5 stars A very good read!
Reviewed in Canada on May 18, 2017
Verified Purchase
I very much so enjoyed this book, along with the other 5 in the series. Tamara Leigh is a gifted author, with the ability to bring her readers to a different time. Thank you, Tamara for a suspenseful, exciting read once again!
Read more
Report abuse

Kath
5.0 out of 5 stars Five Stars
Reviewed in Canada on May 17, 2017
Verified Purchase
I loved this book, highly recommend anything by this author!!!
Read more
Report abuse
See all reviews