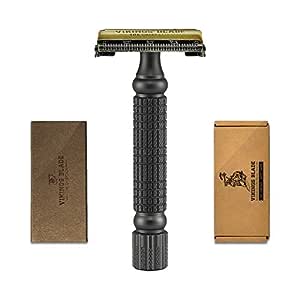 4.6 out of 5 stars
4.6 out of 5
8,030 global ratings
How are ratings calculated?
To calculate the overall star rating and percentage breakdown by star, we don’t use a simple average. Instead, our system considers things like how recent a review is and if the reviewer bought the item on Amazon. It also analyzes reviews to verify trustworthiness.

Jun
5.0 out of 5 stars I did not expect this product to be a part of special memory in my life.
Reviewed in the United States on May 31, 2018
Color: Chromium SilverVerified Purchase
When I asked my 83 years old grandpa what kind of gift I could get for him, he told me that he did not need anything in that age.
Then, I insisted. "Please, just one thing that you have in your mind?"
He said softly: "Maybe an old-style razor that I used to have when I was a young man."
He told me that those he found in the shops are China-made and he was unhappy with the poor quality.

So, my quest began.
Being clueless about men's razor stuff, I had to ask my dad how it looked. My dad explained the shape to me.
But he discouraged me.
"All those old-style razors in the market are cheaply made, and those never meet the quality of their old days.
Don't even bother. Your grandpa will be disappointed no matter what you buy, anyway."

But I seriously wanted to give my grandpa a gift that he liked. Now, he told me what he liked.
I would do my best to get the best quality razor that would not disappoint him!

After searching through all online shops and Amazon lists, comparing reviews. I put my bet on this one!
Bought it with extra blades and "VIKINGS BLADE Luxury Badger Brush, Heavy Swedish Alloy Base + Obsidian Acrylic, Dark Stallion" because that what other reviewers recommended. (You can see that I had zero experience of those products and I had never seen one before I searched online.)

Then, packaged it nicely and sent it to him across the oceans over 5900 miles away.
I was anxiously waiting for his feedbacks. Would he be disappointed...?

A week later, my grandpa called.
He thanked me profusely saying that he really liked it, and would use it every day.
It has been a long time he was missing it in his daily life.
He was even getting emotional because he was so touched that his granddaughter sent him this special gift from miles away.
The gift was exactly what he wanted, and he could not get it anywhere else.
My grandma told me on the phone. " Your granddad is crying."

That moment made me happy and sad at the same time. It was in July 2017 when I bought this.
I thought of writing a review then. But then busy life caught up with me.
My grandpa mentioned how happy he was using this everytime I called him. I smiled and always replied, "I'm glad to hear that you like it!"

This morning, I received a call that my grandpa passed away a few hours ago.
I'm teary thinking about him. Then, I remember how happy he was having and using his favourite razor.
That's why I'm writing this review now.

M. Russell
5.0 out of 5 stars A good thing made even better.
Reviewed in the United States on November 10, 2018
Color: Chromium SilverVerified Purchase
Rewriting my review because I just got my hands on the new version of the chieftain. Pictures show both side by side. Old one is on the left. New one is on the right.

Design changes include bigger combs, more substantial ribs connecting the combs to the head, thicker butterfly doors, and some more detail stamped on the underside and inside of the head.

The new one is significantly heavier, with the weight more distributed towards the top. This is important because that extra heft makes your strokes feel a little more controlled as the razor encounters resistance.

The new one also has significantly less rattle, when I shake it, and the moving parts are smoother and quieter.

This is an all-around outstanding razor with excellent fit and finish, and a very satisfying look and feel. You can't go wrong with it.
Read more

Chele
5.0 out of 5 stars For all the ladies out there - do not fear - you can be manly too!
Reviewed in the United States on November 13, 2015
Color: Chromium SilverVerified Purchase
I'm a woman and have been shaving for about 30 years. When I grew up, my mom had those pink disposable one blade razors. Those would last a shave or two and then we'd chuck them in the landfill. Honestly, I didn't know any better.

Fast forward to today. I finally settled into the bath tub with my new Vikings Blade razor and some frothy manly shaving soap (in almond). I was scared. Why? Because every damn forum where men are talking about these razors they keep saying BE CAREFUL, you might kill yourself. Clearly they are not very experienced because I shaved it all. I did; I shaved it all for science. Except between my cheeks (and since I don't shave my face I'm sure we're all on board with what I mean).

I found no difficulty or danger in shaving my legs. The secret was a good lather and no pressure on the razor head. And I shaved against the grain which must be some kind of man no-no, but it works fine for my legs.

As I moved on to more ... sensitive parts ... I proceeded with caution. Lots of lather and shaving with the grain first, then against the grain. There was no issue. Took my time and everything is as smooth as a baby's butt. This razor definitely was able to handle thick underbrush with ease, unlike my old razor which gets clogged up and takes forever to clear.

Ladies, you must have this razor. MUST. Not only are you saving the environment of all those plastic razors and razor heads, but you're only going to pay about 10 cents per refill.

My bestie (female) has ordered one and my teen is eyeballing my razor! I'm going to let her try it out and if she likes it, she's getting one!
Read more
1,399 people found this helpful
Helpful
Report abuse

Greg
5.0 out of 5 stars Beautiful Razor!
Reviewed in the United States on March 19, 2018
Color: Chromium SilverVerified Purchase
I retired my Schick Injector in 1969, went to electric, then cartridge, and now back to a safety razor - - full circle. The Chieftain looks like it belongs in the Guggenheim. Fit and finish is impeccable. I like the shorter handle for maneuvering around my beard. Also, it travels well in the nice case that comes with the package. Because of the tough stubble below my lower lip, I use the more aggressive Astra blades instead of the supplied Vikings blades. All told, the Chieftain gives a noticeably closer shave than my Mach 3 Gillette (albeit not as fast) and blade replacement cost is significantly lower. The shaving process takes more time but I am retired and hand grind my coffee beans. There is something satisfying about going old school, slowing down and smelling the roses,
Read more
158 people found this helpful
Helpful
Report abuse
See all reviews

Andrew Jurekic
5.0 out of 5 stars Looks great, works well
Reviewed in Australia on October 29, 2020
Color: Obsidian & Rose GoldVerified Purchase
I wasn't as impressed when using this blade the first time with the blades that came with it. However, when I used it with Astra blades (that are a bit sharper), it was much smoother. I get the odd cut, but not often. The problem I find generally with safety razor's is the large head size, it is very hard to get in tight areas. Also being lazy, I only shave every 3 days or so. I find the best solution for me is to remove the stubble with this blade going with the grain, then I finish off against the grain with a Gillette Sensor Excel (2 blade), any more than 2 blades and it is too hard to work with.
Read more
Report abuse

chris harrison
5.0 out of 5 stars Craftsmanship never goes out of style
Reviewed in Australia on February 12, 2020
Color: Chromium SilverVerified Purchase
I did read various reviews before I purchased the Vikings blade, “The Chieftain “ others may have variable controls but what won me over was the simplicity, style and weight, realistically you can use the weight of the razor to achieve a close shave without fearing a face covered with tissue paper trying to stem lots of nicks!
Very impressed with the mechanics,fit and finish
Read more
Report abuse

Anthony
5.0 out of 5 stars So soft on the skin even for daily use !
Reviewed in Canada on December 1, 2020
Color: Obsidian & Rose GoldVerified Purchase
As a firefighter we have to shave on a daily and we learn to let the tools work for us. It’s the same with that type of razor. Put it at the right angle and let the weight/gravity do the work. think it looks beautiful!! I have pretty big hands and I don’t think it’s 'too short’ like some people say. It is my first Safety razor and love it.
Read more
Report abuse

Alex Larder
5.0 out of 5 stars Expectations met.
Reviewed in Australia on November 2, 2019
Color: Obsidian & Rose GoldVerified Purchase
It was exactly what I was expecting - which is perfect.

A free tip for gentlemen just dipping their toe into the world of real shaving - don't slather that gunk-in-a-can you get at the local supermarket all over your face. A proper razor needs a proper shaving soap and a proper brush and aftershave. You'll feel like a million bucks.
Read more
Report abuse
See all reviews