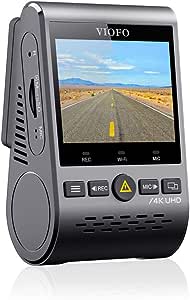 Visit the VIOFO Store
4.2 out of 5 stars 121 ratings
| 22 answered questions
Available at a lower price from other sellers that may not offer free Prime shipping.
See more

1. GPS module is already mounted on the back of the camera body.

2. SD card is not included, it is better to format SD card at least once a month, please use high-performance SD card which capacity is at least 32GB.

3. Please use the original car charger we provided in the package, A129 Duo car charger cannot be used on A129 PRO.

4. We would continually improve product performance through firmware & APP upgrade, you can download them from VIOFO official website.

Bring you a better visual enjoyment

The new model A129PRO 4K dash cam retains its predecessor's ease-of-use but adopts a better Sony Exmore R sensor and 130° field of view. It' s the best choice for drivers who wants to get the clearest dashcam footage anytime and anywhere.

4.2 out of 5 stars
4.2 out of 5
121 global ratings
How are ratings calculated?
To calculate the overall star rating and percentage breakdown by star, we don’t use a simple average. Instead, our system considers things like how recent a review is and if the reviewer bought the item on Amazon. It also analyzes reviews to verify trustworthiness.

Brian
5.0 out of 5 stars Well Thought Out, Better Than Rexing V1 4K
Reviewed in the United States on May 6, 2020
Verified Purchase
If I had to describe this dashcam in one phrase, it would be “well thought out”. The physical design is one of the best on the market, with a very logical button placement, and distinct, clear labels. I love that the GPS unit and power are integrated into the window mount, eliminating the need to have usb cords sticking out of the side of the camera. Physical design had a big influence over which dashcam I ultimately chose, as it’s going to be mounted in my field of view and used on a regular basis. The A129Pro is certainly one of the best designs on the market when it comes to that. Also, included in the box is a super thick & long power cable, 12v dual USB charger, extra adhesive mounts, and a trim tool.

Picture quality was also a deciding factor in my dashcam purchase, and I’m happy to report the A129 Pro is sharper than my previous Rexing V1 4K when it comes to resolving plate information during the day. The image quality at night is also very impressive. In some review videos of the A129 Pro, it looked like the night footage had a slight purple tint, which is often produced by cameras with a cheap image sensor. This was a worry, as I do a lot of driving at night. However in all my testing and usage, this was not the case — night footage looks totally acceptable with no weird color shifting! It has better low light performance than my previous Rexing V1 4K, hands down.

The user interface is also very well rounded. The menu items are thoughtfully organized, and it has some useful features such as parking mode and motion sensing. I’m currently running this camera solo in full 4K and leaving it running 24/7 and it has been doing great. But it’s nice to have the option to add a rear camera in the future.

Viofo’s mobile app seems to work better than Rexing’s app too, which is an important part of the dashcam user experience. It’s also easier to turn on WiFi on the A129Pro, and you can transfer full 4K files onto your mobile device no problem. (Whereas the Rexing only supported mobile transfers of 1440p max resolution.)

One issue I had when first reviewing footage from the A129Pro from the SD card on my computer was playback of the clips in Quicktime. Despite watching them on a brand new high-spec MacBook Pro, the dashcam videos played as though they had been recorded in two frames per second, even though the cam was set to 4k30fps. Upon further research, other people had this issue too. The solution is to change the camera from H.264 to H.265 video codec, which is more modern, space efficient, and plays back smoothly in QuickTime. Or alternatively, if you prefer to record in H.264, play the files using VLC instead of QuickTime to alleviate the issue with video playback lagging. Aside from this one hiccup, the A129Pro has been a pain free experience. I would definitely buy this again to install in another vehicle over the Rexing 4K!

BMBell2929
3.0 out of 5 stars It has a lot of potential but...
Reviewed in the United States on December 4, 2020
Verified Purchase
The parking mode is REALLY quirky. For starters, the settings are confusing and almost contradictory. If parking mode is on, motion detection must be off. That right there is a "head scratcher". Also, there's no clear way in parking mode to tell if/when it's recording. The red record light just blinks nonstop...which I *thought* meant it's not actively recording. The recordings made during parking mode are supposed to appear in a separate folder on the phone app - but it's always empty. On the plus side, the pairing between the camera and phone is great and it's convenient being able to change the settings via the app. The 4K quality is really impressive. I'm coming from a different brand and there's no comparison. If I didn't need parking mode then this camera would be straight 5s in ratings. One would hope that a solid firmware update would address the parking mode issues. So as the headline states, it has a lot of potential but...please read above!
Read more
2 people found this helpful
Helpful
Report abuse

David Chavez
4.0 out of 5 stars Get it
Reviewed in the United States on November 23, 2020
Verified Purchase
I work in a lawfirm that partly deals with personal injury claims (car accidents) and although any dash cams help tremendously most of what I see is horrible 1080p or 720p. When I saw the price of this 4k camera I had to get it. Pro is definitely the video quality and its small foot print. Tucking the wires and connecting it to the fuse box makes it almost invisible. Cons are its not refined. Updating it is a pain, wiring it is a major pain, trouble shooting is horrible. I spent hours figuring out what was wrong with my hard wiring to find out all I had to do was reset the device settings.
PS if you wanna save some money buy the single a129 pro during a sale ($159) and the rear camera on ebay ($59-40). Also the filter is a must.

Ken Schnable
5.0 out of 5 stars Great camera, great software.
Reviewed in the United States on May 24, 2020
Verified Purchase
I first bought the Rove camera and found the software very good inadequate.
I then purchased VIOFO A129 Pro 4K.
The VIOFO A129 Pro 4K is a fantastic camera and software. I’m sure there are better cameras in the higher price range but I think that this unit will do everything I need for a really great price.

TokyoChris
5.0 out of 5 stars Does all I need.
Reviewed in the United States on July 2, 2020
Verified Purchase
I bought this as a deterrent to other Manila motorists and (sadly) to protect against corrupt Manila traffic police trying to scare drivers into handing over cash to avoid prosecution for non-existent traffic offences. Of course immediately I mounted it (easily done although be warned the adhesive pad is strong), I didn't have another scrape with a lunatic taxi driver or incident with Manila's finest, and then it was lockdown in Manila so I haven't driven anywhere for the past three months.

Still, the experience I did have with it on a 600km road trip was all good; image quality is outstanding and the ability to view through wifi is great.

Highly recommended if you want a dashcam with wifi and excellent image quality.

Peter
2.0 out of 5 stars Wifi stopped working
Reviewed in the United States on September 6, 2020
Verified Purchase
I bought this back in november 2019 and then again in may 2020. The one from may works great in that car - no issues even with 115 degree arizona heat.

The one from November (this one) has had the Wifi stop working, it doesnt turn on and the camera says transport error. I purchased this camera solely for Wifi as i have a disability and it is very difficult to manually remove the SD card. I have been a loyal VIOFO client, i used to have an A118C2, G1 W/S and A119S v2 without any issues

VIOFO please contact me for details and review to send me a replacement under warranty as it is still under a year, i would really appreciate it.

Gstel
1.0 out of 5 stars Design flawed
Reviewed in the United States on August 8, 2020
Verified Purchase
While the quality of the video and picture are good the dash cam feature “motion detection” doesn’t work very well. It doesn’t record even when somebody walks right in front of my vehicle.
Read more
2 people found this helpful
Helpful
Report abuse

ken inn
5.0 out of 5 stars the best camera for the price
Reviewed in the United States on June 21, 2020
Verified Purchase
excellent, a true 4k camera. easy to mount and set up. hard wired, it will detect motion or movement when the car is parked. great picture, great support
Read more
One person found this helpful
Helpful
Report abuse
See all reviews

Sorin
5.0 out of 5 stars Great dash camera.
Reviewed in Canada on July 23, 2020
Verified Purchase
Very good quality during the day.
After a few weeks using it I'm very pleased. It can read licence plates very easy.