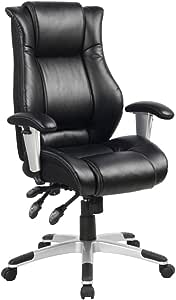 Brand: VIVA OFFICE
3.2 out of 5 stars 113 ratings
Currently unavailable.
We don't know when or if this item will be back in stock.

3.2 out of 5 stars
3.2 out of 5
113 global ratings
How are ratings calculated?
To calculate the overall star rating and percentage breakdown by star, we don’t use a simple average. Instead, our system considers things like how recent a review is and if the reviewer bought the item on Amazon. It also analyzes reviews to verify trustworthiness.

GT32
5.0 out of 5 stars Exceeded my expectations!
Reviewed in the United States on December 30, 2013
Verified Purchase
As for Amazon, the product was delivered lightning quick and in quality packaging. They nailed their end of the transaction with a perfect score.

As for the chair. I spent weeks trying to decide what chair to buy. I went to stores to try some out, and I read hundreds of reviews. My main requirements for the chair were adjustability, comfort, and quality. I have had extensive back and hip issues over the years, so I really needed a chair that would be adjustable to fit my back. This chair has wonderful options when it comes to adjusting. Virtually every part of this chair moves or adjusts to fit your needs. The best part is that the chair not only moves, but it has the ability to lock into place when you find a spot that is just right, or if you want to remain stable. The armrests also adjust, which I know in many chairs they do not, so that was a plus for me as I like my armrests slightly higher.

Next, was the issue of comfort. As stated, I have back and hip issues, so sitting for long periods can be painful. This chair has passed my 8 hour test with ease. I spend the vast majority of my day sitting at my desk, so it is important to have a chair that I can sit in without pain. The seat is soft and contoured, but not so soft that you just sink to the hard bottom. It has excellent support in the lumbar region, and the armrests are superb. Overall, this chair gets a 10/10 on comfort, and I have already logged a couple of 12 hour days in it.

Finally, the last big selling point for me is quality. Right out of the box I could tell that this chair was going to exceed my needs in quality. I am roughly 210 pounds, so I did not want a chair that couldn't hold up under my weight. This chair is made from very strong materials, and I noticed metal pieces in areas that were plastic on my last chair. The material on the seat and back is a bonded leather, so if you are looking for genuine leather, this is not quite the real deal. In my personal experience with bonded leather, it does hold up really well over time and is still superior to the synthetic leather found on some other chairs. The bonded leather feels really nice and is stitched together with what appears to be nice quality, but the stitching does not have raised lines or bumps that make the chair uncomfortable.

UPDATE: I am now about three weeks into using this chair and my opinion has only strengthened. This chair has been excellent and I am already looking into my next purchase from Viva. This chair is the best purchase I made in all of 2013 and I highly recommend it to anyone on the fence.

capn gary
1.0 out of 5 stars First impressions
Reviewed in the United States on June 24, 2015
Verified Purchase
UPDATE: Well, I'm coming up on a year of owning this chair. As of this time, the seat and back padding are completely flattened and useless. I'm using an orthopedic seat pad in order to sit in the chair at all. Given what I paid for this chair, I expected it to last at least a year, if not two or three years. But....

Got this today. And none too soon. My old office chair was on its last legs. (Screws holding the arms to the base & back were ripping out.)

2nd Edit: The second of these chairs actually lasted less than six months before the main seat pad and the pad for the upper back was totally flattened out. Don't waste your money if you're looking for durability and comfort beyong six or seven months, at the most. The leather hold up fine. The mechanical part of the chair is great. The cushions purely, absolutely and totally are worthless.

My first impression of this chair is...okay. Contrary to some of the other reviews, I had no problem assembling this thing. Good grief people. There are a dozen allen bolts in groups of 4 that you have to put in. Unless you were born on another planet or never put a nut & bolt together, the assembly is simple. Just don't tighten any of the four bolts in the group (4 in left arm, 4 in right arm, four in base) until all four bolts are started. Duh. The holes are so big I would have been happier if the company had sent along some flat washers to go between the flange head bolts and the chair parts, but...oh well. They were nice and sent along extras, I guess in case you decide to eat one or something. ???

Nice touch: The bolts were all given a dose of Lok-tite, which should insure the bolts won't back out on their own. (That's the blue stuff on the threads. DON'T clean it off.)

The seat is very well padded, both bottom and back.

Now my one complaint: the head rest is too far back to be really useful if you like to recline a bit and work. Getting your head to the padding means that you'll be looking up too much for a desktop or computer screen.

The frame?? Who knows. We'll see how it does. Ditto the padding. My last office chair, which I purchased at Office Depot for about $150, well, the padding lasted about 2 months before it was just flattened out and useless. I'm 6'0" tall and scrawny. 155-160 pounds. I ended up getting an orthopedic seat cushion that helped that chair last just under 2 years. But it was, quite literally, falling apart.

We'll see how this one does. Honestly? I rather expect the bottom padding in this to crap out in a month or so. It feels like fiber-fill, and I know that won't last.

UPDATE: Well, it's only been a few months, and the cushions are mostly caved in. The bottom is caved in. The back is getting that way, and I'm basically a pretty scrawny guy. Sometime within the next couple of months, I'm sure, I'll be ordering another of those real orthopedic cushion for the seat. I haven't decided yet.

It's pretty frustrating to buy something this expensive and have it basically wear out in just a few months. I expected more than just a short period of comfort for a $218.00 chair. Other than the padding, I have no complaints, but then I don't have the seat raised up, so I don't know if it drifts down.
Read more
3 people found this helpful
Helpful
Report abuse

Joe Williams
2.0 out of 5 stars Not great
Reviewed in the United States on February 17, 2014
Verified Purchase
I ordered this chair having little idea what I'd get due to the few reviews. When I opened the box I noticed that much of the packaging seemed haphazard, but none of the parts were damaged and all were there. The instructions were light, but between them and the markings on the chair you should be able to figure it out easily.

After assembling it seemed like the piston wasn't quite seated right (between the base and the seat) and it felt like it was rocking a bit. I think it's settled from me sitting on it because I no longer notice any of that movement.

As another reviewer noted, I'd like to see a little more range of movement on the back tilt. Other than that, the chair is pretty comfortable. The padding seems adequate.

I've now had this chair for almost 6 months. I've changed my review from a 4 to a 2. The padding has already been softened. After only a little bit of time in this chair I become sore. Most of the parts are already loose and wobbly. The movement in the piston returned pretty quickly and now the back moves side-to-side as well. Tightening doesn't really help. The lumbar support is hardly "excellent" as described in the title. It's barely there at this point. If you're using this for short stints at the computer (30-min) it's probably fine. If you plan on working in this chair be prepared for sore legs and back after a few months of use.

I should have shelled out more money for a high quality chair and am now looking for one. You should consider doing so too.
Read more
18 people found this helpful
Helpful
Report abuse
See all reviews
Pages with related products. See and discover other items: Ergonomic Chair