Shipping rates and Return policy
Have one to sell?
Sell on Amazon 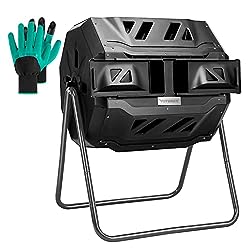 Amazon Customer
5.0 out of 5 stars Perfect backyard composter
Reviewed in the United States on September 3, 2020
Great product! I thought I would challenge my daughters (11 and 13) to put it together. Their building experience is basically on the LEGO and birdhouse level. I didn’t help them at all except on the very last panel where they just didn’t have arms long enough to reach in and hold the nut in place while putting the screw in. It took them about an hour to put it together so any adult who says it’s difficult, I’m going to say must have never even hung their own pictures in the house. It Even comes with the screwdriver! The legs could be a little sturdier but fully functional. We’ve been loading it up for the past week and it’s been great. We’re anxious for a few months from now when it’s ready to go in the garden.
Images in this review

Bett Sundermeyer
4.0 out of 5 stars Leaked immediately. YUCK
Reviewed in the United States 🇺🇸 on August 11, 2022
Color: OrangeVerified Purchase
I put this together by myself, and as some have commented, it is kind of a pain. There are 56 small screws and nuts (and 2 larger screws and nuts), so an electric screwdriver is extremely helpful. A ratchet to hold the tiny nuts, while you tighten the screws would also be helpful. It comes with a screwdriver, but I didn't use it. I used my electric screwdriver. I wish it came with a small ratchet that fits those nuts, as that would have been helpful to me. I used my fingers to hold the nuts while screwing in the screws, and my fingers were pretty sore when I was done. Getting the sections of the bin to fit together is a bit awkward, especially at first, but it can be done by one person. Getting the bin divider to fit into the track inside the bin was a PAIN IN THE *&^%^. The directions are lacking, so you don't know which way the divider is supposed to go in, and it doesn't fit easily either way. There are arrows on the end points, but I couldn't figure out what they were pointing to. There is nothing in the directions about which way it is supposed to go in, or what the arrows mean. I eventually got it into all the tracks, but there was a lot of cussing involved.

It appears to be very sturdy and I've nearly filled up one side. The one major thing I didn't like about it was that the bin comes in 6 or 7 sections that you screw together. After I got it together, I drug it out by the back door and dumped some old veggies etc in it that I'd been saving in my kitchen compost bucket. It was pretty gross and runny. Well, the runny stuff leaked thru the seams in those 6 or 7 sections. It dripped runny, gross stuff all the way out to the corner of the yard where I drug the big composter. It almost immediately starting drawing flies all over my pathways and on the composter itself. It's been a week or so and it doesn't seem to be leaking as bad now, but if I had to put one of these together again, I'd probably try to seal the edges of those sections so it doesn't leak as bad. There are also holes in the bin, so if your compost gets runny, it is going to leak thru those holes. So, I always stand back when I'm turning it. I'm guessing those holes are also going to allow insects in, so I'm expecting maggots at some point. Not looking forward to seeing that.

Keith McKerall
5.0 out of 5 stars Sturdy
Reviewed in the United States 🇺🇸 on September 26, 2022
Color: OrangeVerified Purchase
After reading reviews of assembly of this and similar units, I realized that I would simply have to handle a lot of screws. No problem. Didn’t need an electric screw driver or a drill with a Phillips head bit. It took a while, maybe a couple of hours, give or take, not rushing, with a few breaks. I don’t think that there is a way to mess it up since there appears to be only one way that the the panels can go together. Be sure to put the divider panel in before you get on a roll and put too many of the structural panels on. Don’t worry if the panel seems to be a little loose as you finish assembly. It all kind of coalesces together and tightens up the drum as you get the final panel installed. You’ll need a pair of pliers, socket or vise grips to get tighten the screw and bolt that hold the drum’s axle to the stand. I added my greens and browns and a little compost starter and water, gave it an easy spin, and I’m off to the races. Sturdy is what I wanted; sturdy is what I got.
Read more
One person found this helpful
Helpful
Report abuse

Gramma
4.0 out of 5 stars Hard to assemble.
Reviewed in the United States 🇺🇸 on September 24, 2022
Color: BlackVerified Purchase
Very pleased with the item itself. Only problem was the assembly. Being an elderly woman, there is no way I would ever have gotten this put together by myself. One son was here when it arrived and fortunately another son came about half way through the assembly. Still it took at least an hour and a half to finish. Now though, my trip out there nearly every day is fun and exciting as I add kitchen scraps, paper, water, leaves, and give it a few spins. I am looking forward to getting rabbit poop from my grandson to be the magic ingredient! Would have given it 5 stars except for the time-consuming assembly.
Read more
Helpful
Report abuse

Bruce Rogers
4.0 out of 5 stars So far so good.
Reviewed in the United States 🇺🇸 on September 25, 2022
Color: BlackVerified Purchase
Went together easily. I like that there are two zones.
We have a young black bear cruising the neighborhood so I'll see if he damages it.
Put a trail cam on it and the coons look at it every night trying to figure out how to get in.
Would give it a 5 star if it makes it through the year intact.
Also not sure how good the compost will be or ease of getting it out.
Seems very sturdy but I'll update after a year.
Read more
Helpful
Report abuse

SLI503
4.0 out of 5 stars Great product, love the two chambers.
Reviewed in the United States 🇺🇸 on September 24, 2022
Color: OrangeVerified Purchase
The product itself is great at what it does. Made my first batch of compost and it went well. The only issue I have with this product is that the holes (ports) are too small. When dumping compost, reaching in will be a necessary act to get it all out. Recommend cutting down waste products to the smallest possible to avoid this issue. I would purchase this again, knowing what I know now.
Read more
Helpful
Report abuse

S. Soto
5.0 out of 5 stars WE ARE HEAVY COMPOSTERS - WORKS GREAT
Reviewed in the United States 🇺🇸 on August 31, 2022
Color: BlackVerified Purchase
Sturdy, effective, and well designed. Confession: I paid to have it assembled so can't speak to how easy/hard it is to put it together yourself. However, i shopped around a bunch. Just produced my first successful round of compost. All good! I was a little concerned it would be too small for our needs, however because of the turning mechanism, the compost finishes must quicker than I expected so you can rotate back and forth between the two sides as needed. Also thought maybe the opening was too small to get out the compost, but not a problem either. Saw some reviews complaining that it leaks. That is true if you pour a lot of water or liquid in it. But you don't want too much moisture just sitting in your compost. A proper bin should be well ventilated so that is always going to be an issue. Anyway, I don't write too many reviews, but happy with the product. Happy composting!
Read more
16 people found this helpful
Helpful
Report abuse
See all reviews

Ben Bowen
4.0 out of 5 stars If you have animals that like to chew your compost bins find something tougher.
Reviewed in Canada 🇨🇦 on April 17, 2021
Color: OrangeVerified Purchase
The only reason I didn't give this a 5 star is because it has only been assembled and in use 1 week and some animal has already chewed 2 holes in it, one being as big as a tennis ball!! I would have thought the material would be a bit tougher to withstand that. A little disappointed to say the least😔
Assembly was simple enough. Easy to use.
Read more
13 people found this helpful
Report abuse

prototyper
4.0 out of 5 stars Seems to be pretty good value. Practical design.
Reviewed in Canada 🇨🇦 on July 12, 2021
Color: OrangeVerified Purchase
When this item arrived at my door I couldn't imagine what was in the box. I was expecting something big and it had never occurred to me that a 43 gallon plastic barrel would arrive in pieces. Quite a bit of assembly is required and the instructions are barely sufficient. However, it all came together well enough.
I have it set up outside now and a couple of weeks worth of food scraps are collecting in it. The access doors on the barrel seem well thought out and are easy enough to use.
My one concern about this composter is how well it will stand up to wild animals trying to get at what is inside. For that matter, how well it will stand up to a full load of compost.
Read more
5 people found this helpful
Report abuse

Paul
4.0 out of 5 stars Item assembles as described.
Reviewed in Canada 🇨🇦 on June 28, 2021
Color: OrangeVerified Purchase
Package included extra bolts and screws.
You could assemble by yourself with difficulty but assembles great with 2 people.
Directions easy to follow.
When set up it looks sturdy and rugged.
Material seems to be strong and long lasting, but we shall see.
Had it set up for 2 days now and easy to use and looks like it will be a long lasting unit.
Very happy so far with this purchase.
I recommend the this product.
Read more
One person found this helpful
Report abuse