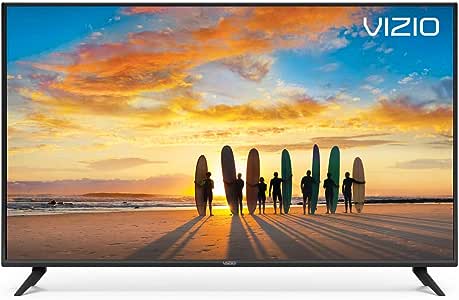 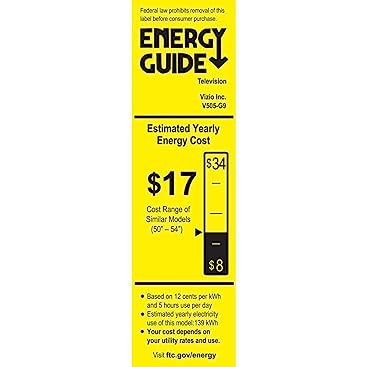 by VIZIO
3.8 out of 5 stars 119 ratings
| 121 answered questions
Available from these sellers.

Use your voice to control your TV.

Value and quality come together beautifully in the VIZIO V Series 50” class (49. 5" Diag.) 4K HDR Smart TV. With a budget friendly combination of 4K resolution, High Dynamic Range, Smart TV apps, and Voice control compatibility with select devices, The V Series gives you the best features at the smartest value. With VIZIO’s award winning Full array LED backlighting, you’ll see the DIFFERENCE in the clarity and detail of the picture of the all new V Series. Ultra HD (3840×2160) resolution offers four times the detail of a 1080P TV, HD video is automatically upscale for the best possible picture, and the V Series TV is equipped to support high Dynamic Range for dazzling colors and contrast. Watch razor sharp 4K Ultra HD content from 4K formatted Blue ray movies, 4K enabled game consoles, and even shows streamed from apps like Netflix. You won't need a separate streaming device, as the V Series can easily stream your favorite shows from apps directly on the TV. And VIZIO watch free lets you stream over 100 channels Absolutely free – live news, movies, sports, comedy, music and more. Every VIZIO Smart TV also has Chromecast built in so you can stream entertainment from thousands of Chromecast enabled video and music apps right to the TV. And the V Series is ready for the future of TV – watch high Dynamic Range content Available through apps such as Netflix and Hulu, and turn on your TV or change channels with just your voice using Alexa or the Google Assistant supported devices like Google Home. The VIZIO V Series 4K HDR Smart TV delivers what you love best about TV at an exceptional value.

3.8 out of 5 stars
3.8 out of 5
119 customer ratings
How does Amazon calculate star ratings?
Amazon calculates a product’s star ratings based on a machine learned model instead of a raw data average. The model takes into account factors including the age of a rating, whether the ratings are from verified purchasers, and factors that establish reviewer trustworthiness.

R. Thomas
4.0 out of 5 stars Good TV, but falls short...
Reviewed in the United States on December 17, 2018
Bought this from Costco after trying three other sets that didn't have great pictures. Got this home and set up in under an hour, The settings are pretty extensive and allows for a lot of tweeking. Normal reception (from Comcast cable) is extremely limited by 1080P and picture is not as sharp as it could be. Since we don't subscribe to streaming services that provide 4K, can't really comment on extended viewing of 4K content. Vizio does have a short 4K video that can be downloaded to a thumb drive and plugged into the USB port. The picture from the video is outstanding. It is crisp, clear and sharp. The sound is a little low, but a sound bar alleviates this issue. After trying LG, Hisense and another Vizio (developed a vertical line after 4 days), we went with this Vizio model and are pretty pleased so far. Plus, Costco gives you and extra year of warranty at no cost. I would recommend this TV.
Read more
76 people found this helpful
Helpful
Comment Report abuse

Alex W.
5.0 out of 5 stars New Vizio V Series - 50 Inch
Reviewed in the United States on January 8, 2019
I purchased a unit from Best Buy a few days ago and had to return it because there was a large amount of backlight bleed. Since this is a brand new model (V505-G9) I was hoping it was just a bad panel...and I was correct, as the replacement looks excellent. For $299, this TV is fantastic. Dolby Vision from the Apple TV 4k looks great (even better than HDR10 from my Roku Ultra) and the TV is very responsive. The blacks are very deep, the whites are very white, the colors absolutely pop (used rtings.com calibration settings for the 2018 E/D series), and the picture in 4K is crystal clear (1080p looks good too). Overall a great unit for the price. Could you get a better picture from a P-Series? Probably, but this is less than half the cost and that is hard to beat.
Read more
61 people found this helpful
Helpful
Comment Report abuse

When watching shows or movies in HD and HDR the picture looks like real life, it’s amazing. You will see details that you’ve never
seen before when using a non 4K tv, so crisp and clean.

Also since it’s a smart tv there’s plenty of apps built in like Netflix, Hulu, Prime, YouTube, iHeartRadio, Vudu, etc. Also built in is Chromecast so you can watch any other apps installed on your phone and stream them to the TV. This feature worked flawlessly the few times I used it.
The TV also supports Alexa/google home use. I just received a dot for Xmas and it is very nice giving out demands and having the tv respond! You can have the tv turn on/off, volume up/down, open apps, or go to specific channels.
-Note, I’ve noticed the built in streaming apps don’t stream in high resolution for some reason, they usually stream in 720p and 480p. I bought the 4K fire stick and the same show would stream in 1080p on the stick but only 720p in the built in app. I’ve looked through the settings and can’t find anything.

Only negative to the tv would be the sound. It’s pretty bad. Just low and lifeless. It says it has built in surround sound but even when that’s activated it sounds bad. I have a sound bar so it’s not much of an issue for me, but I’d definitely recommend anyone who buys this tv to get one.

Overall it’s just an incredible TV and well worth the price. Picture is great, and the addition of live TV is very nice for people like me who do not have cable.

TimTimTimmy
4.0 out of 5 stars Side viewing angle
Reviewed in the United States on February 14, 2019
Verified Purchase
When viewing the screen from 45 degrees or more, the picture seems to be washed out and loses color. But other than that, I love it so far.
Read more
20 people found this helpful
Helpful
Comment Report abuse

Kindle Customer
4.0 out of 5 stars STOP!! Buy this TV . 😎
Reviewed in the United States on March 28, 2019
Verified Purchase
Just buy it already.
It's a great value good tech fast free delivery. What else you need?. Nothn. Watch for delivery .. TV got delivered to the wrong address.
Read more
16 people found this helpful
Helpful
Comment Report abuse

ccjack
5.0 out of 5 stars Like the size
Reviewed in the United States on February 26, 2019
Verified Purchase
Nice size just need to sit and read the tv in order to use it
Read more
9 people found this helpful
Helpful
Comment Report abuse