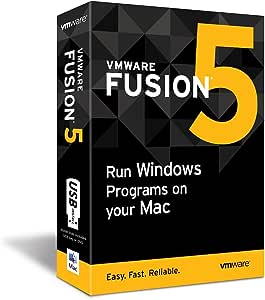 Brand: VMware
Platform : No Operating System
3.7 out of 5 stars 108 ratings
Currently unavailable.
We don't know when or if this item will be back in stock.

VMware Fusion 5 is recommended for users who are looking for the easiest, fastest and most reliable way to run Windows programs on a Mac. With more than 70 new features, VMware Fusion 5 is optimized for OS X Mountain Lion, Windows 8 and the latest Macs to deliver the ultimate Windows on Mac experience.

The best way to run Windows on a Mac just got better. VMware Fusion returns with more than 70 new features, including optimization for Mountain Lion, Windows 8 and the latest Macs. 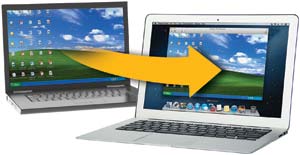 Easily transfer your entire PC to your Mac with the Migration Assistant for Windows. View larger 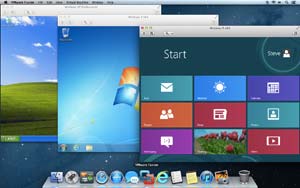 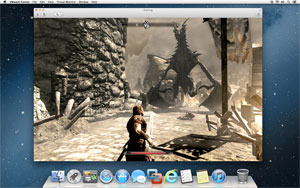 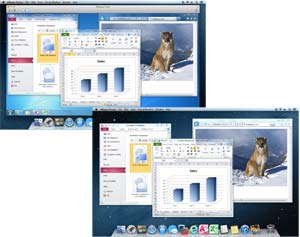 Run your Windows programs in a singe window, or run in Unity for a fully integrated experience.
View larger

Easily Switch From a PC to a Mac

Now it's easier than ever to transfer your entire PC to your Mac and make the most of your Windows software investment with VMware Fusion's PC migration assistant for Windows. Get the best of both worlds and have access to your Windows programs and all your files from your old PC directly on your Mac, whenever you need them.

Run your favorite Windows programs alongside Mac applications without rebooting. Whether you want to run Windows XP, Windows Vista, Windows 7 or Windows 8 on a Mac, VMware Fusion's easy install feature will get you up and running in no time. With the ability to run Windows-only programs like Microsoft Project, Access and Internet Explorer, VMware Fusion turns your Mac into the ultimate computer for compatibility. 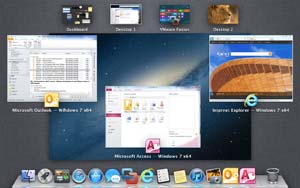 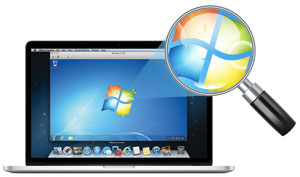 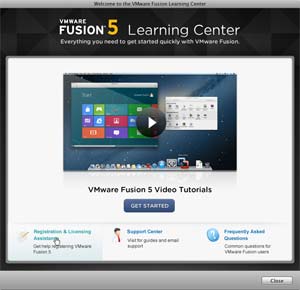 Built-in Learning Center to easily learn how to install and run Windows on your Mac. View larger

Running Windows Programs on a Mac Couldn't Be Easier

VMware Fusion 5 makes it easier than ever to run Windows on a Mac. Run Windows programs the same way you use Mac applications, with seamless copy-and-paste, drag-and- drop, and networking and printing that require no additional setup.

Launch Windows programs directly from the Dock, Spotlight or Launchpad and view them in Exposé, Spaces and Mission Control as if they were Mac applications. Easily interact with Windows programs using Mac shortcuts and intuitive gestures.

Get a more Mac-like experience when running Windows programs on a Mac. VMware Fusion 5's enhanced user interface makes working with your Windows applications quicker and easier. Extend Mountain Lion's unique features to your Windows environment and search your favorite Windows programs in Launchpad or use "AirPlay Mirroring" to stream your Mac and Windows applications on your HDTV. You can even get VMware Fusion notifications in Mountain Lion's notification center. It just works. VMware Fusion 5 is also compatible with OS X Lion and Mac OS X Snow Leopard.

Who said Windows 8 was only for PCs? Get the most out of the new Windows 8 Metro environment directly on your Mac and run it side-by-side with your Mac applications. VMware Fusion 5 has been optimized to take advantage of new Windows 8 technologies and will make you wonder why you would ever consider running Windows 8 on anything other than a Mac. VMware Fusion supports Windows 8, Windows 8 Pro and Windows 8 Enterprise.

Designed for the Latest Macs

Get the most out of VMware Fusion 5 with the new learning center. Learn how to get started, transfer your entire PC to your Mac or install a new copy of Windows and more through step-by-step easy to view video tutorials.

More Compatible than Ever Before

With added support for virtualizing Windows 8, Mountain Lion Server, Ubuntu 12.04, Windows Server 2012 as well as 200 other operating systems, VMware Fusion 5 will turn your Mac into the most compatible computer you've ever owned.

For added peace of mind, VMware Fusion includes 18 months of free email support and a 12- month complimentary subscription to McAfee Anti-Virus Plus to protect your Windows environment.

Made by the Virtualization Leader

Used by 96% of the Fortune top 1000 companies, VMware has won more than 280 awards for its virtualization-leading software including the industry-acclaimed Macworld Editor's Choice award.

What Differentiates VMware Fusion 5 from Other Solutions?

Engineered in California by the worldwide leader in virtualization, VMware Fusion was recently chosen by Macworld over Parallels as the best way to run Windows on a Mac. Macworld highlighted its faster performance, easier installation and general operation, more Mac-like behavior and better value for money. (Macworld, March 2012 issue)

VMware Fusion 5 is recommended for home users, students and business professionals who are looking for the fastest, easiest and most reliable way to run Windows and Mac applications side-by-side on their Mac without rebooting.