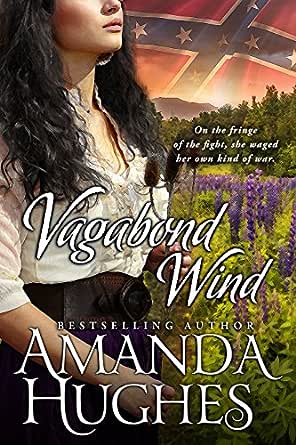 You've subscribed to Bold Women of the 19th Century Series! We will preorder your items within 24 hours of when they become available. When new books are released, we'll charge your default payment method for the lowest price available during the pre-order period.
Update your device or payment method, cancel individual pre-orders or your subscription at
Your Memberships & Subscriptions
There was an error. We were unable to process your subscription due to an error. Please refresh and try again. 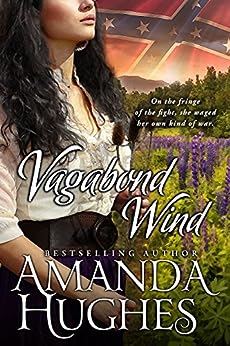 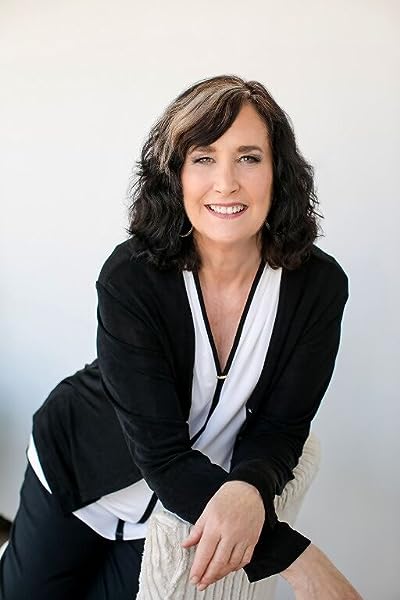 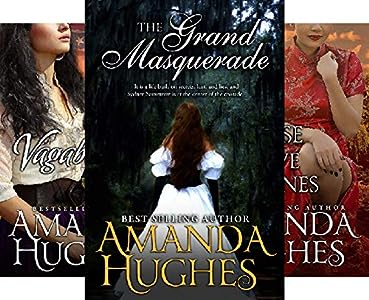 "A whirlwind of emotions and adventure with a great love story to boot!"--Sweet and Sassy Book Nerds.

"Take a rarely used theater of the American Civil War, mix in a colorful group of characters and then let Ms. Hughes take you on an adventure with romance and a chance to step into another time and place."--Metropolitan Bookworms

"You experience the Civil War from a totally different perspective. Storytelling at its finest."--St. Paul Bibliophiles

Best-selling and award-winning author, Amanda Hughes is a "Walter Mitty", spending more time in heroic daydreams than the real world. At last, she found an outlet writing adventures about bold women in the 18th and 19th Century. Winner of the Gems National Award for Writing, and shortlisted for numerous book awards, Amanda is a graduate of the University of Minnesota, and when she isn't off tilting windmills, she lives and writes in Minnesota.
Don't miss her page-turning novels for readers who like historical fiction with a hint of romance. All of her books are stand-alone and can be read in any order.
The Bold Women Series of the 18th Century:
Beyond the Cliffs of Kerry Book 1
The Pride of the King Book 2
The Sword of the Banshee Book 3
The Bold Women Series of the 19th Century:
The Grand Masquerade Book 1
Vagabond Wind Book 2The House of Five Fortunes Book 3The Bold Women of the 20th Century:The Looking Glass GoddessInterested in her new books or deals?  Go to Amanda's website amandahughesauthor.com

4.1 out of 5 stars
4.1 out of 5
107 global ratings
How are ratings calculated?
To calculate the overall star rating and percentage breakdown by star, we don’t use a simple average. Instead, our system considers things like how recent a review is and if the reviewer bought the item on Amazon. It also analyzes reviews to verify trustworthiness.
Top reviews

Regan
5.0 out of 5 stars Great Civil War Adventure!
Reviewed in the United States on December 6, 2015
Verified Purchase
The story begins in 1853 in West Virginia as we meet Zya Lazar, a woman of Cherokee, Portuguese and African blood (a “Melungeon”—a person of tri-racial heritage) who was orphaned as a young child and raised by Romani gypsies. Her gypsy father is a kind man but her gypsy uncle is ruthless, cruel and uses her as well as his own sons for his raids that bring terror to the countryside.

Zya, trained up to be a part of the raids, marries one of her uncle’s sons when she is 14 and becomes “bait” to lure the unsuspecting settlers to the gypsies’ trap. Only later does Zya discover that her gypsy uncle murdered her father who was a free black and her family. When she learns this, she leaves to live in the wild for years.

When War Between the States breaks out, Capt. Davis Wyndham comes to Western Virginia where Zya is living in the woods and in trouble with the law (through no fault of her own). Davis gets the charges dropped on the condition she becomes his guide as he travels about the countryside raising a brigade of Confederates to harass the enemy. She agrees and becomes a part of his most unusual band of raiders.

Some wonderful characters will hold you captive as you are plunged into the Civil War and Davis sets his band to interfering with the B&O Railroad. Zya and Davis soon find they are attracted to each other and love takes its course. But there are many obstacles and much they must overcome to be together.
Read more
14 people found this helpful
Helpful
Report abuse

Janice
5.0 out of 5 stars Astounding Historical Civil War Romance!
Reviewed in the United States on January 11, 2016
Verified Purchase
Zya, an exotic woman of unknown origins and part of a gypsy caravan, and Davis, a Confederate soldier tasked with heading up a brigade of “hit and run” tactical soldiers against the B&O Federal railroad, meet under conditions of war and Zya decides to join Davis’s brigade as a scout who knows the area well and who wants to escape the leader of the gypsy caravan. Ms. Hughes’ knowledge of the Civil War and the type of war waged by the Confederacy against the Federals’ greater odds is astounding and her no-nonsense style of narration kept my eyes glued to the pages until I finished the full-length book in two days. This is Book 2 in Ms. Hughes’ series called Bold Women of the 19th Century. I like her writing so much that I’m going to read the rest of her backlist. I highly recommend her writing!
Read more
13 people found this helpful
Helpful
Report abuse

Dixie Girl
5.0 out of 5 stars Vagabond Wind
Reviewed in the United States on May 14, 2020
Verified Purchase
Zyra was tired of all the sneaky evil and killing her uncle encouraged.At first she had enjoyed being the only woman allowed to travel with the group. During the day the gypsy clan would hold street fare and sell different items to the people of whatever town then 3 or 4 days later they made night time raids on outlawing homes. Then head out to another town. After she found her adopted father hanging from a Tree she realized just how evil her uncle was as he had murdered his own brother. That night she sneaked out of the camp and Went out on her own. She used a new name and became a trapper and fur trader. Read about her life and the dangers she encountered during the war between the state's.
Read more
Helpful
Report abuse

Kathleen J Ruggio
5.0 out of 5 stars Civil War Adventure
Reviewed in the United States on June 5, 2016
Verified Purchase
This book was based on a headstrong, clever, pistol shooting, adventure seeking woman. Zya had many hardships throughout her life including abduction from her original family and taken by Romani Gypsies at the age of 5. She learned so many hard lessons and was hardened from the people who she found she could not trust. This book is just packed with action and a little romance. Different than any book I've read so far. I enjoyed the different relationships she encountered as she moved throughout the mountains and the south during the war between the North and South. Each one taught her something and helped her grow. She became involved with a group of "Irregulars" commissioned by the military that was headed up by Capt. Davis Wyndham. This group ran special missions. If your a civil war buff you'll love this book.
Read more
2 people found this helpful
Helpful
Report abuse

donald montano
5.0 out of 5 stars A DIFFICULT STORY TO TELL, BUT AMANDA HUGHES DOES IT SO WELL1
Reviewed in the United States on November 21, 2015
Verified Purchase
I have just finished reading The Vagabond Wind, the latest novel in The Bold Women series. Again, I must tell you, I love bold women. And no one builds their character better than Ms Hughes.
Young Zya rides with a band of gypsies, criss-crossing Tennessee and Virginia in the years leading up to the Civil War, robbing and killing whenever an opportunity presented itself. When one of the clan recounts that the little girl the band adopted so many years ago was actually taken in a similar raid and her family was killed to keep the secret, Zya decides it is time to leave and go her own way.
From here the story only gets better as Zya grows into a mature, young woman. The hardships were many and Ms Hughes paints a vivid picture of what it was like to survive in the back woods country of the time.
Enter Captain Davis Wyndham of the newly formed Wyndham's Rangers in the civil war beginning to divide the loyalties of the southern states. He saves Zya from prison by taking her on as a scout, and now the reader is pulled along through mountains and across valleys, hiding out in remote cabins and venturing into towns dressed as Federal troops. Against this backdrop, strong feelings grow between the two so well written, it is as if the reader is present. All this action is balanced perfectly as the war draws to its conclusion.
Only after a climactic battle, can they pick up the pieces of their own lives, leaving the reader thinking of this intriguing story long after he has put it down.
Read more
11 people found this helpful
Helpful
Report abuse

KRM
5.0 out of 5 stars Do not miss this great read!
Reviewed in the United States on June 13, 2016
Verified Purchase
Amanda Hughes has done it again with this brilliant historical read! I learned about the Romani gypsies against the backdrop of the civil war. Zya was a strong heroine with great depth who meets her match in the Hero Davis, also strong and brave and loyal, with a great love of adventure. This book was a page turner full of adventure with a sweet romance. Great secondary characters, especially Margaret and the Raiders. Great Job, Amanda, please keep these wonderful historical fiction books coming!
Read more
One person found this helpful
Helpful
Report abuse

Elizabeth Sintes
5.0 out of 5 stars Vagabond Wind
Reviewed in the United States on June 3, 2016
Verified Purchase
Wow! What a story,so well written in so many ways. I just could not put this book down. When I first started this story I almost thought I do not think I am going to like this story and almost quit reading and then before I knew it I was hooked and did not put it down. It was exciting adventurous and a beautifully well written history of our civil war. I could go on and on. Yes highly recommended.
Read more
2 people found this helpful
Helpful
Report abuse
See all reviews

rabbit
4.0 out of 5 stars Four Stars
Reviewed in the United Kingdom on July 21, 2016
Verified Purchase
unusual and hard to put down
Read more
Report abuse