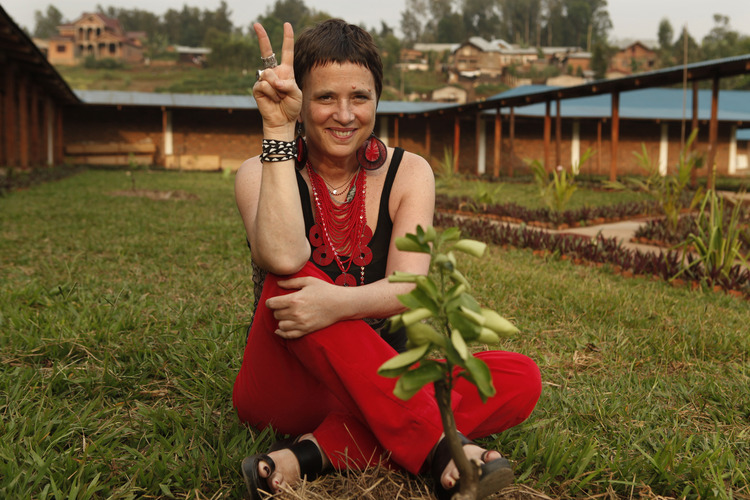 by Eve Ensler (Author)
4.5 out of 5 stars 69 ratings
See all formats and editions
Sorry, there was a problem loading this page. Try again.

"I was worried about vaginas. I was worried about what we think about vaginas, and even more worried that we don't think about them. . . . So I decided to talk to women about their vaginas, to do vagina interviews, which became vagina monologues. I talked with over two hundred women. I talked to old women, young women, married women, single women, lesbians, college professors, actors, corporate professionals, sex workers, African American women, Hispanic women, Asian American women, Native American women, Caucasian women, Jewish women. At first women were reluctant to talk. They were a little shy. But once they got going, you couldn't stop them."

So begins Eve Ensler's hilarious, eye-opening tour into the last frontier, the forbidden zone at the heart of every woman. Adapted from the award-winning one-woman show that's rocked audiences around the world, this groundbreaking book gives voice to a chorus of lusty, outrageous, poignant, and thoroughly human stories, transforming the question mark hovering over the female anatomy into a permanent victory sign. With laughter and compassion, Ensler transports her audiences to a world we've never dared to know, guaranteeing that no one who reads The Vagina Monologues will ever look at a woman's body the same way again.
Read more
Previous page
Next page

This item: The Vagina Monologues - Acting Edition (Acting Edition for Theater Productions)
$8.99$8.99
Get it Oct 6 - 14
Only 1 left in stock - order soon.
Ships from and sold by dav2149.
A Memory, a Monologue, a Rant, and a Prayer: Writings to Stop Violence Against Women and Girls
$17.00$17.00
Get it as soon as Wednesday, Oct 5
Only 4 left in stock (more on the way).
Ships from and sold by Amazon.com.
Total price:
To see our price, add these items to your cart.
One of these items ships sooner than the other.
Show details Hide details
Choose items to buy together.

Eve Ensler is a Tony award winning playwright, performer and activist. She is the author of international phenomenon, The Vagina Monologues, which won an Obie and has been published in 48 languages and performed in over 140 countries. Eve wrote the New York Times Bestseller, I Am An Emotional Creature: The Secret Life Of Girls Around The World. She then adapted it as a play which ran to critical acclaim in South Africa, Paris, Berkeley and Off-Broadway. She is the founder of V-Day, the global movement to end violence against women and girls, which has raised over 100 million dollars for grassroots organizations around the world. On V-Day's 15th Anniversary, it launched it's most ambitious campaign One Billion Rising which inspired one billion people in 207 countries to Strike Dance and Rise on Feb 14, 2013 for the freedom, safety and equality of women. With the women of Congo, V-Day opened and supports City of Joy in Bukavu, Congo, a revolutionary center where survivors of gender violence Turn Their Pain to Power. Eve starred in the HBO version of The Vagina Monologues. Her play Here was filmed live by Sky Television in London, UK. She co-produced the documentary What I Want My Words to You which won the Freedom of Expression Award at Sundance. Her other plays include Necessary Targets, The Treatment and The Good Body, which she performed on Broadway, followed by a national tour. In 2006, Eve released her book, Insecure At Last: A Political Memoir, and co-edited A Memory, A Monologue, A Rant and a Prayer. Her newest book In The Body of the World will be published by Holt. Ensler lives in the world.

John O'G
5.0 out of 5 stars NOT the Ensler book - Actors playbook. Excellent Primer.
Reviewed in the United States 🇺🇸 on November 16, 2014
Verified Purchase
I intend to see the play when it's next scheduled in or around Valentine's Day. I promised my better half I'd go with her; she said it might open up this old dog's eyes as to certain feminine issues. It did and besides, if it makes the queen happy - the land is happy. AND I'll certainly derive a huge benefit. This IS NOT the Ensler book. It's an actors playbook of about 35pp. It goes through the actual dialogue/monologue that one will hear from the stage. It's a real good primer for seeing the performance and/or reading the Ensler book, which I shall be doing soon since I just ordered it. I'd recommend getting this pamphlet, and especially for you guys out there, give it a try - you could learn a little something new and impress that certain woman in your life. I'm 68 and I did. P.S. As i understand it, many of the conversations are not meant to be taken literally but are a vehicle for a woman expressing how she feels.
Read more
One person found this helpful
Helpful
Report abuse

Tristina
5.0 out of 5 stars Great read
Reviewed in the United States 🇺🇸 on July 27, 2021
Verified Purchase
I’ve always been a fan of this. Definitely a recommendation for everyone’s library.
Read more
Helpful
Report abuse

Amazon Customer
5.0 out of 5 stars My favorite show. Perfect edition for performing today.
Reviewed in the United States 🇺🇸 on June 22, 2017
Verified Purchase
I directed this show my sophomore year in college and this is the only copy I could find that was for multiple actresses and wasn't in Eve Ensler's voice. Loved it. The show went really well. Good read. Perfect for 2017
Read more
2 people found this helpful
Helpful
Report abuse

Patience-Anne W. Lenk
4.0 out of 5 stars Vagina Monologues
Reviewed in the United States 🇺🇸 on April 10, 2014
Verified Purchase
I saw this performed recently and had a hard time hearing all the dialogue, so wanted to read the script. Wonderfully funny in a ribald way.
Read more
Helpful
Report abuse

Fogbound
5.0 out of 5 stars Everyone should read this!
Reviewed in the United States 🇺🇸 on March 18, 2016
Verified Purchase
Thoroughly researched, a tour de force for the right performer — this piece rings true! It should be required reading in every high school and/or college.
Read more
One person found this helpful
Helpful
Report abuse