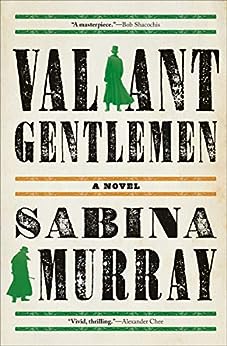 Following her New York Times Editor’s Choice collection of short stories Tales of the New World, historical fiction master Sabina Murray returns with an epic and bold novel of friendship and betrayal set across four continents and a 40 year time-span.

In prose that is darkly humorous and alive with detail, Valiant Gentlemen reimagines the lives and intimate friendships of humanitarian and Irish patriot Roger Casement; his closest friend, Herbert Ward; and Ward’s extraordinary wife, the Argentinian-American heiress Sarita Sanford. Valiant Gentlemen takes the reader on an intimate journey, from Ward and Casement’s misadventurous youth in the Congo—where, among other things, they bore witness to an Irish whiskey heir’s taste for cannibalism—to Ward’s marriage to Sarita and their flourishing family life in France, to Casement’s covert homosexuality and enduring nomadic lifestyle floating between his work across the African continent and involvement in Irish politics. When World War I breaks out, Casement and Ward’s longstanding political differences finally come to a head and when Ward and his teenage sons leave to fight on the frontlines for England, Casement begins to work alongside the Germans to help free Ireland from British rule. What results is tragic and riveting, as both men are forced to confront notions of love and betrayal in the face of the vastly different tracks their lives have taken.

Reminiscent of the work of Peter Carey and Michael Ondaatje, Valiant Gentlemen is a uniquely human account of some of early 20th century’s larger historical figures from a “ravishing” (O magazine) and “brilliant” (Boston Globe) voice in fiction today.

Sabina Murray grew up in Australia and the Philippines and is currently a member of the MFA faculty at the University of Massachusetts, Amherst. She is the author of Tales of the New World, A Carnivore's Inquiry, Forgery, and The Caprices, which won the PEN/Faulkner Award for Fiction.

The Florida is a paddle steamer imported for the purpose of getting goods from Leopoldville on the southern edge of Stanley Pool across to the northern bank, and more importantly, of bringing goods―ivory and rubber―back. Nothing larger than a dugout can make it up the Congo, and then, not even the whole distance. The mighty Congo in no way resembles any of the rivers of Casement’s youth. There are waterfalls and cataracts and currents that would make the most scientific mind conceive of long-fingered sorcerers plucking unlucky souls from the surface and dragging them beneath. There is a bubbling quality to the cataracts; one named “Hell’s Cauldron” is just down river from Matadi. More than once Casement has seen a native, arms raised up, mouth shouting, voice obliterated by the crush of water, spin round and round and disappear as if there were an enormous drain at work. But the upper part of the Congo, from Stanley Pool to the east, is navigable and there are two or three boats―missionaries―chugging industriously, perhaps transporting souls back and forth across the pool, in some sort of God-pleasing transaction. But the only way to get the Florida to the shore of Stanley Pool is by porter and the only way this can be accomplished is in pieces―many pieces. Currently no better way exists, and―in fact―no other way. There is talk of a railway from Boma to Leopoldville, which would tear up the country but most likely have a civilizing influence. Maybe that would be fine, but the work involved (would he sign on for that?) gives one pause. And Casement’s grown tired of dealing with caravans, and porters who are ambushed and injured and often run off with their loads into the jungle where it’s impossible to find them, as if the jungle folds her own in her arms to protect them.
***

Two weeks have passed since Ward and Casement assembled the caravan and they are back in Matadi, making final arrangements. All in all, Casement’s pleased with they’ve managed―many Bakongo, who are an honest people and hardworking and with whom, since he’s known to them and speaks the language well, he shares an easy relationship. The rest are mostly well-traveled Loango, who are therefore skilled at understanding friendly chiefs from hostile chiefs. But the territory from Matadi along the Congo to Leopoldville has all been opened up anyway and Casement has no reason to predict hostility from the many chiefs he will encounter. Some villages have no more than twenty inhabitants, and some upward of three hundred, and all a chief and witch doctor to keep things lively.
Many of the pieces of the Florida cannot be broken down to the regulation sixty-four pounds and will have to be carried in hammocks strung between bamboo poles, the weight shared by two porters. The shaft of the Florida is nearly a ton and cannot be taken apart and so will have to be transported by cart. Some higher up has remembered the cart, although neglected to provide anything with which to pull it. Ward left earlier in the morning to find bullocks and has already taken an hour longer than Casement thought he would. Casement exhales into the heat. A child, whom he knows by sight, comes up to him.
“Mayala Swami, do you have a gift for me?”
Matabicho is the word the child uses, which culturally is somewhere between a gift and a bribe.
“I might,” he replies in Kikongo, “if you can tell me where Mayala Mbemba is.”
“By the river looking at the Dutch trader’s women.”
Casement gives the child a piece of hard tack, which was in his pocket when he put on his trousers this morning. When did he put it there? The child seems happy and Casement is satisfied because he knows, from experience, that the child’s information is correct.
There is Ward standing on the riverbank watching the spectacle of De Groot’s harem, four women, their glossy skin set off by yards of embroidered snow white muslin, arrange themselves into a canoe amid a musical chatter.
Casement sees his shadow standing next to Ward’s, but is still.
“I know you’re there, Casement,” says Ward. “And I can feel your disapproval.”
“Of the Dutch trader?”
“Of me.”
“Four is a lot of women,” says Casement.
“One would be enough.”
“It’s easily arranged.”
“And a lot of money. It wouldn’t be worth it with the work we’re doing.”
“Not unless she could walk forty miles in one day.”
“Very funny,” says Ward. He turns from the spectacle of the women with some effort.
“Did you get the bullocks?” Casement asks.
“It has been decided that we should have no bullocks,” a little humor here, “as they are highly susceptible to the tse-tse. So instead it has been proposed that the enormity of the shaft,” more humor, “be offset with a significant number of porters.”
“Porters?”
Ward nods.
“I would recommend at least a hundred men,” says Casement. “One hundred, no fewer.”
“Which is what I recommended and that number is on their way up from Vivi.”
“How?”
“The Arab Tippo Tib is supplying the porters.”
“Tippo Tib is a slave trader,” says Casement. “Are we now in business with him?”
“Someone is,” replies Ward.
There’s a moment where both Casement and Ward contemplate their insignificance. We are pawns, they think together. We are powerless. Then the moment passes, carried off by a doctoring wind.
“Did you get the Madeira?” asks Ward.
Casement nods. --This text refers to an alternate kindle_edition edition.

Thomas R. Edgar
4.0 out of 5 stars Complxs people.
Reviewed in the United States on January 20, 2017
Verified Purchase
Good book but it took awhile to get into it. And going back and forth between characters impacted the flow. Lots of names to remember.
Read more
Helpful
Report abuse

E Ann
1.0 out of 5 stars Not to expectation
Reviewed in the United States on December 15, 2016
Verified Purchase
Had very hard time staying with this book
Read large variety of books. Could hardly get halfway and gave up. When this first posted it had all five stars. I gave 1
Read more
Helpful
Report abuse

Kathleen A. Flynn
5.0 out of 5 stars Very Well Done
Reviewed in the United States on November 2, 2016
A vivid and intelligent imagining of the life of the amazing Roger Casement -- adventurer, humanitarian, Irish revolutionary and secretly gay -- and his artist friend Herbert Ward. Time devours all, but it does so with great panache here. My favorite kind of book, sad and funny both.
Read more
6 people found this helpful
Helpful
Report abuse

Sabrina Murray explores the intimate lives of the men and women who left Europe to explore the world at the turn of the century. She brings them back to England, to their wives and families and then sends them back out again, always somehow uncomfortable, at home everywhere and nowhere, loving and hating the families that anchor them.

Matt
5.0 out of 5 stars Wow.
Reviewed in the United States on October 23, 2017
What an incredible read. Not necessarily a riveting page-turner, but a slow burn that makes you want to stop after each chapter so you can savor every word and make the story last. As a history buff I was drawn to this book as "historical fiction," but it is how the story of love, friendship and family transcend throughout the historical developments of colonialism, World War I, and Irish independence that make this novel special. The beautiful language and elegant prose reads gives the book the air of a English literary classic, and had me frequently consulting my dictionary and re-reading passages so I would not miss a beat. Despite the subtle sophistication this book remains approachable, funny and relevant.
Read more
One person found this helpful
Helpful
Report abuse

Gaby Chapman
5.0 out of 5 stars Bravo!
Reviewed in the United States on December 15, 2016
This magnificent novel takes an investment of time and thought for the reader and pays off big-time. It is essentially an unconventional love story playing upon a background of decades of a both brutal and tender history during the late nineteenth to early twentieth century. In the league of War and Peace.
Read more
3 people found this helpful
Helpful
Report abuse
See all reviews