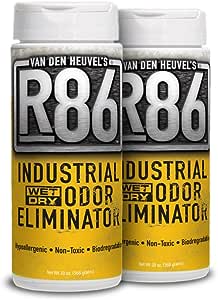 FAST ACTING: Starts working immediately and most odors eliminated within 15 minutes. R86 is made up of 32 different food grade essential oils and salt for fast acting clean with a light fragrance. This will remove odors completely and they will not return.

4.3 out of 5 stars
4.3 out of 5
1,427 global ratings
How are ratings calculated?
To calculate the overall star rating and percentage breakdown by star, we don’t use a simple average. Instead, our system considers things like how recent a review is and if the reviewer bought the item on Amazon. It also analyzes reviews to verify trustworthiness.

janelizabeth
5.0 out of 5 stars YAY, IT WORKS!!!
Reviewed in the United States on January 24, 2019
Color: BasicVerified Purchase
At the end of summer mice moved into my attached garage. I set traps, got a new high frequency plug in, and used "natural" products, but nothing worked. Worse, it smelled horrible. I swear those mice had intestinal problems. I have lived in my house 25 years and I have NEVER had an infestation before. I always used one of those high frequency plugs in, and had only a few mice show up to be trapped. Finally I gave in and used poison. Now the horrific order became even worse. Truly gag provoking. I knew I had to get out there to clean, but I simply couldn't handle the smell. Remembered janitors used a product to take away the odor of vomit at schools, and got on Amazon. Whatever that is, it is sold in bulk and is well over $100. Read reviews for every product. Compared and debated, but felt the reviews for Van Den Heuvel's R86 were consistently good, and it was a very reasonable price for 2 containers. When it arrived I realized I had accidentally bought 2 pkgs instead of 1 pkg of two! Got a good odor controlling face mask and made myself go into the Hell Hole my poor garage had become. Thank God for this product! I began by sprinkling the R86 every where. Used 1, and then a half of the other bottle and then beat a retreat, wondering if there was any hope! A day later I went back and, while it wasn't gone, the worst of the smell was gone. Some of these reviews said, in regard to ALL of these type of products, that the smell of the product was so "sickly sweet" that it was worse than the original smell. Yes, R86 does have a "sweet" smell, and I can see how some people would react to it without enthusiasm, but if this product smells worse than what you are trying to clean up, you probably don't have a very big problem! Admittedly, while I wasn't wearing a respirator, I did have a good face mask so that probably helped. Still, there was NO WAY I could have gotten in that space and cleaned without this product neutralizing the worst of it. It is a yellow powder and it is not so light that it flies around like dust. Because of that, when I started sweeping I think R86 also kept the dust down. I was so overwhelmed by this task, and too embarrassed to ask for help. I put off dealing with it for weeks because I couldn't even handle the smell when I opened the door. I grew up on a farm and I have shoveled you know what, and dealt with the odor of animal carcasses, as well as the icky odor of a dead mouse somewhere in the outbuildings. It was always disgusting and gross, but NOTHING like the smell that permeated my garage. If you have someplace that stinks in the worst way, do not hesitate to get this product. Remember how I accidentally ended up with 2 boxes of 2 cans each? I am not going to be sending that second box back!! I hope I don't have to use it again soon, but I do not want to be without R86 available to me the minute I sense that an awful smell may be developing. I put a lot of stock in the reviews that Amazon customers write, so I am very grateful to the reviewers who guided me to this product. If you too have a Hell Hole, GET THIS!
Read more
148 people found this helpful
Helpful
Comment Report abuse

supersjh
5.0 out of 5 stars QUICKLY REMOVES TOUGH ODORS - Miracle Powder-
Reviewed in the United States on March 17, 2018
Color: BasicVerified Purchase
This stuff is nothing short of a miracle!!! My dog got sprayed by a skunk at 5am and immediately came in the house. Our entire home was so disgusting in the following days that I could hardly stand to be in it. I mean it was knock you down repulsive the minute you opened the front door! Everything smelled very strongly like skunk, from coats in the closet, to shoes on the floor. It was horrifying and I immediately started ordering things I thought would help and went on a washing spree. Well, I should have just bought R86, had it overnighted, and been done with it. I used it last night, exactly as instructed, made up some liquid spray and within 15 minutes the living room stopped stinking. I left a shallow dish of the powder in a skunked out room that had been shut up and always smelled musty anyways; well this morning that room smells very fresh and clean. Unbelievably this product has completely removed any trace odors of skunk from our home and it now smells fresher and cleaner than it ever did before. There is no lingering fragrance or perfume smells, just clean; however, when you are cleaning and spraying the product it does smell a little strong of the natural 2% vanilla they say the R86 contains.
Read more
177 people found this helpful
Helpful
Comment Report abuse

Mindy Willis
5.0 out of 5 stars The BEST! Out of all others we have tried!
Reviewed in the United States on April 20, 2019
Color: BasicVerified Purchase
Okay...let me tell you all something. After reading the reviews and I had no limit to the cost of something to get rid of all the dog crap, Dog urine, dog chewing up rotten potatoes and vomiting, eating cat crap and vomiting...we had a mess. Closed doors did not stop this dog that my daughter adopted as she never had food so she ate everything and hid things for later( severely abused). Poor dog would Not use the restroom outside! Too scared from being beat by a previous owner and the list goes on. I can’t express how much my adult daughter’s place smelled. I mean you could smell her apartment from downstairs walking up to her place. She wanted to get rid of the dog, but I begged her not to and this WAS HER LAST RESORT! I told her I finally found something that was Industrial Strength and would work due to the previous reviews. I was praying this would work in her place as it isn’t healthy to live in a place where there is such a defecating smell and didn’t want her to give up on her dog. Purchased these two bottles for 29.99 and oh my goodness! I can’t express how happy and how well this product took the smell out of her place! It’s unbelievable and it’s organic and just wow!
It looks like semi-clumpy/ gritty sugar with a hint of yellow. A few of her friends said it smelled like banana/vanilla when I spread the bottles onto the floor. Didn’t see any reviews about “banana smells”, but it sort of did! Anyway this works! Really need to order more for this dog and getting ready to hit the purchase again button after this review. Thank you reviewers for all your help as this is the reason I purchased these! Will be a return customer for life! Nothing else has helped and thank you so much!

Denise Pooler
4.0 out of 5 stars Works great initially....
Reviewed in the United States on August 17, 2018
Color: BasicVerified Purchase
This product has been used on carpets that have had animals on them with no time to shampoo between guests. While it works great when you first apply it, the odors do return after a few days. I doesn't really fully eliminated them, basically covers it up for a few days and wears off. But in all honesty, it works as well or better as any other product I've tried and the light, temporary scent is very pleasant. I will continue to use unless something better comes along.
Read more
75 people found this helpful
Helpful
Comment Report abuse

jb mitchell
5.0 out of 5 stars Strongest
Reviewed in the United States on February 6, 2018
Color: BasicVerified Purchase
Bought an assortment of odor eliminators to deal with a sweet, musty smell common in older houses in south Florida. This one is the strongest, no doubt. Initially I thought it too strong-smelling to use, but I just opened the tops, put one in the attic and the other in the worst offending closet, and two weeks later I believe they are doing their job with just a very occasional whiff of the product itself. (I did not remove the granular product from container...just opened the tops to air.)
Read more
84 people found this helpful
Helpful
Comment Report abuse
See all reviews

Lynn
1.0 out of 5 stars It stinks!
Reviewed in Canada on October 26, 2020
Color: BasicVerified Purchase
The smell was so bad I threw it out.
Read more
Report abuse
See all reviews

Page 1 of 1 Start overPage 1 of 1
This shopping feature will continue to load items when the Enter key is pressed. In order to navigate out of this carousel please use your heading shortcut key to navigate to the next or previous heading.
Back
Next
Pages with related products. See and discover other items: odor eliminator for strong odors, pet carpet, stain remover for carpets, stain remover for carpet, Best urine away for cats, Dog Skunk Sprays