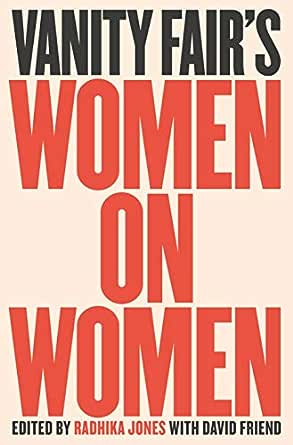 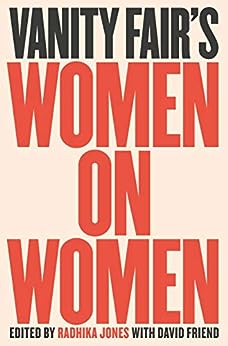 “A veritable candy box of glamour and personality, [Vanity Fair’s Women on Women] is a celebration of women’s voices.” —Vogue

“Vanity Fair magazine’s latest essay collection, Women on Women, takes readers through the decades of history. While it certainly contains modern marvels like Tina Fey, Lena Waithe, and Nicole Kidman, equally appealing are essays on bygone legends including Emily Post and Frida Kahlo, written entirely by women. If, like many, your education was lacking in profound female figures, this tome will begin to fill in those gaps.” —BUST

“An eminently enjoyable collection. . . . There are plenty of ‘I didn’t know that’ moments.” —Library Journal, starred review

“This dazzling collection features 28 profiles of famous women, including politicians, artists, musicians, and actresses, from the last 36 years of Vanity Fair. The profiles, each of which was written by a woman, offer snapshots of their subjects at key points in time, often with remarkable prescience. . . . This is an ideal collection for those who enjoy celebrity profiles with a bit more substance.” —Publishers Weekly

“A vigorous selection of essays spanning the magazine's modern era that underscore the combative resilience of notable accomplished women who never gave in to what was expected of them…poignant tales of how one rises and falls and then rises again…Besides making for absorbing reading, these essays pack a feminist wallop.”—Kirkus

Vanity Fair profiles set themselves apart through the bracing, unflinching nature of the writer’s gaze. This is especially powerful and poignant when the gaze is female. Who could prepare for the scene in Maureen Orth’s 1993 portrait of Tina Turner when Turner pulls the hem of her dress from her legs all the way up to her shoulders—no bra—and turns to show off her curves in profile. A showstopper, you’d think—but Orth doesn’t stop there. Instead, she looks past the silhouette to note that the thing she can’t see is just as important, if not more. “What’s really remarkable about Tina Turner’s face,” she writes, “is how few scars it bears from the years of beatings she took.” A difficult, at times contentious discussion of brutal domestic violence ensues. This is no glossed‑over celebrity profile; this is a deep, dark dive. (See page 224.)


But since this is also the resilient Tina Turner, she comes up singing. And at one point, Turner circles back to an almost confrontational question that Orth posed during their sessions together: Have you ever stood up for anything? Turner, with strength and vulnerability on display, revisits the ques‑ tion and responds, “I am happy that I’m not like anybody else. Because I really do believe that if I was different I might not be where I am today. You asked me if I ever stood up for anything. Yeah, I stood up for my life.”

This book is full of women who are not like anybody else—women who, in their singular ways, stood up for their lives, as they envisioned them, and in so doing, shaped the lives of multitudes. Vanity Fair’s Women on Women is a collection of classic profiles and essays about women by women. All these pieces appeared in the modern incarnation of the magazine, during the past thirty‑six years, though some travel further back, into the lives of icons such as Frida Kahlo and Grace Kelly, whose work and legacy endure.


Since its inception during the Jazz Age, more than a century ago, Vanity Fair has covered historically significant women, focusing on their pursuits and passions, their trials and triumphs, and their evolving roles in society. When the magazine’s inaugural editor, Frank Crowninshield, took the helm in 1914, one of the cornerstones of his mission statement for the publication declared: “We hereby announce ourselves as determined and bigoted femi‑ nists.” The magazine would go on to be a vital cultural bellwether until the Great Depression, when it suspended publication and was folded into Vogue, only to be resurrected in 1983.

Crowninshield—a social dynamo, art connoisseur, and uncanny arbiter of magazine talent—employed dozens of women writers and editors. Among his earliest hires was a budding essayist, humorist, and contrarian named Dorothy Rothschild (later Dorothy Parker). Among the most influential editors in Crowninshield’s crew was Clare Boothe (Brokaw) Luce, who, after helping conceive what would become Life magazine in the 1930s, became a renowned playwright, member of Congress, U.S. ambassador to Italy, and an advisor to presidents.

Women contributed essays and columns about the suffrage movement and social norms, sexual mores and modern manners, crime and scandal, nightlife and high society, the workplace and the home, art criticism and theater reviews. In 1915, Crowninshield decided to assign one of the magazine’s most popular early pieces after he was ridiculed for asserting that he knew a dozen women in New York who earned more than $50,000 a year—and fifty more who made over $10,000 (more than $250,000 in current dollars). The writer, Anne O’Hagan, conducted her own investigation, surveying a range of female entrepreneurs and arts figures, and discovered that Crowninshield’s estimate was far too low.


Some seventy years later, Tina Brown, who turned the magazine into a cultural mainstay in the 1980s and early 1990s, continued in this tradition, realizing that the voice of the intrepid woman writer—along with the vision of women photographers and illustrators—were part of Vanity Fair’s DNA. One need only consider how integral the work of Annie Leibovitz, the magazine’s principal photographer for its entire modern era, has been to its identity to understand the role women have played in Vanity Fair’s staying power, whether through the inaugural Hollywood Issue cover in 1995 (featuring a young Sandra Bullock, Gwyneth Paltrow, and Julianne Moore, among others), Leibovitz’s portrait of Queen Elizabeth II in 2016, or her picture of a wry, knowing Lena Waithe, the actor‑screenwriter‑producer, in 2018.


Graydon Carter, who edited the magazine for twenty‑five years, and who assigned the lion’s share of the stories in this anthology, once described Vanity Fair as “the biography of our age, one month at a time.” Like the best biographies, the stories in Vanity Fair gain power from their contemporary resonance. Magazines are cultural arbiters, and their editors unabashedly seek to predict the future—or even help determine it. The only problem is that by the time that future comes to pass, the magazine has often been relegated to the recycling heap. It is striking, therefore, in this collection, to come across past moments of prescience one, two, even three decades old. A remark from Gail Sheehy’s profile of Hillary Clinton in the spring of 1992: “Hillary could—and should—be our first woman president.” (Were we governed by the popular vote, she would have been.) An observation from Ingrid Sischy’s profile of Nicole Kidman ten years later: “She’s proved herself to be a star with a capital S, the one‑in‑a‑generation kind who, like Elizabeth Taylor, is bigger than the Hollywood system.” (Kidman’s almost‑complete takeover of big and small screens can attest to this.) A passage from Janet Coleman’s profile of Whoopi Goldberg in 1984: “Among her fans was the Pulitzer Prize–winning novelist Alice Walker. (‘I loved her work,’ Walker says. ‘I thought she was just great.’) They discussed the film version of Walker’s novel The Color Purple. ‘Honey, in The Color Purple,’ Whoopi says, ‘I’d play the dirt.’ ” In fact, she played the lead, Celie, in the 1985 film directed by Steven Spielberg, a performance that earned her an Oscar nomination and a Golden Globe for Best Actress in a Drama.

But signaling the future isn’t Vanity Fair’s only function. Also in its house codes is a fascination with nostalgia, those forays into the past that help us interpret the present and remind us how we got from there to here. There was Julia Child, an ad‑industry copywriter turned employee of the O.S.S. (pre‑ cursor to the C.I.A.), who, after acquiring a knack for fine cuisine while living in Paris and Provence, would eventually elevate the palate, taste, and cooking regimens of millions of Americans. There was Emily Post, the former debu‑ tante who dabbled unremarkably in Edith Wharton–style fiction before turn‑ ing her attention at the age of forty‑eight to a bible of manners—a book that still sells hundreds of thousands of copies. (Laura Jacobs writes, “The very qualities that made Post’s fiction a bit simplistic—her endless optimism, her ingrained sense of fair play, her authorial presence too much in the room— were exactly the qualities that made Etiquette embraceable, accessible, inti‑ mate.”) There was Cher—no, no, Cher is still here; she is very much still here. Cher is forever.

In a sense, they all are forever, as long as their stories remain. To spend time with these women—subjects and writers alike—is to be reminded of how indelibly they continue to shape our culture, our politics, the way we live now. It is something of a magazine maxim that the most compelling stories expand out from their subjects to capture something fleeting about the world around them—the ways they make their moment, and the ways their moment makes them. This is a moment for women’s voices, and we are proud and delighted to bring them forward. --This text refers to the hardcover edition.

Radhika Jones is the editor in chief of Vanity Fair. She has served as editorial director of the books department at The New York Times, deputy managing editor of Time, and managing editor at The Paris Review. She holds a PhD in English and comparative literature from Columbia University.

David Friend,
a writer, editor, curator, and formerly Life magazine’s director of photography, is Vanity Fair’s editor of creative development. He is the author of The Naughty Nineties and Watching the World Change, and an Emmy-winning documentary producer.