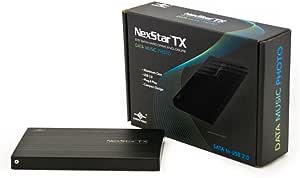 4.3 out of 5 stars
4.3 out of 5
3,449 global ratings
How are ratings calculated?
To calculate the overall star rating and percentage breakdown by star, we don’t use a simple average. Instead, our system considers things like how recent a review is and if the reviewer bought the item on Amazon. It also analyzes reviews to verify trustworthiness.

Randy Randleman
1.0 out of 5 stars Nothing holds the mounted hard drive in place except for the sata connector!
Reviewed in the United States on November 19, 2018
Style: NexStar TX - USB 3.0 (Updated version)Verified Purchase
The "Vantec NexStar TX 2.5" USB 3.0 Hard Drive Enclosure (NST-228S3-BK)" (that Amazon lumps reviews for many different models together so this model number is important Received 19 Nov 2018) does NOT come with anything to which the hard drive is actually mounted other than the SATA connector. This is NOT like many of the other Vantec products I have used over the years that have a caddy or tray to which the hard drive mounts and then slides into the enclosure. If the purpose of this enclosure was for a one time use (e.g. emergency recovery) or something then it might not bother me. However, I plan to use this as a portable hard drive and do not want my disk rattling around inside the enclosure; flexing the data and power connector; nor do I want it to have electrical contact with the outside of the case.

It is a real shame, Vantec has made some really high quality products in the past. This does not seem to be one of them. When I initially opened the box, I thought it was missing the caddy part but, from what I can tell now, this model just may not come with one.

Corey White
5.0 out of 5 stars Astonishingly good value
Reviewed in the United States on September 27, 2010
Style: NexStar TX - USB 2.0Verified Purchase
When you buy something like a hard drive enclosure from a second-tier manufacturer for such a low price, there are certain expectations: shoddy workmanship, poorly translated manual, baffling packaging, poor design, etc. I'll confess I had those expectations, but I didn't expect it to matter -- I wanted this enclosure for one-time use, to clone my Macbook's current drive onto a new (higher capacity) drive before installing it.

However, the enclosure I received couldn't be more different than what I expected. It came beautifully packaged in a box with a nice little manual (with pictures and clear English), a carrying pouch, USB cable, installation screws, and even a screwdriver! As other reviews have mentioned, the included cable is a y-cable to allow a high-speed drive to draw power from 2 USB ports if necessary. This is the kind of thoughtful packaging you expect from high-end consumer electronics, not a cheap one-time-use drive enclosure. The enclosure itself is solid aluminum and just barely bigger than the 2.5" drives it's designed for. It has a sleek, simple design and flawless construction -- there's no flex to it at all and not a single rough edge.

After (easily) installing the drive within the enclosure, there's still no feel of flexing, and shaking the apparatus gently produces no noise or sense of movement. All seems very snug and secure (there's a padded foam cushion inside one end of the enclosure to help with this).

When I turned it on, the drive loaded up flawlessly. There was a small vibration noise, but considerably less than you would expect from (for example) a hard drive fan in a PC case. The enclosure became warm to the touch over time, but not hot, which I took as a sign that the aluminum was conducting heat away as desired.

All in all, I couldn't be more pleased with this enclosure, especially given the low price. I don't remember the last time I was so pleasantly surprised by an electronics purchase.
Read more
489 people found this helpful
Helpful
Report abuse

Moss Parker
5.0 out of 5 stars If you transfer large files and have eSATA port/s, you need this enclosure.
Reviewed in the United States on August 13, 2016
Style: NexStar 6G - USB 3.0/eSATAVerified Purchase
I suspect that when most people add an external drive to their systems they automatically think USB 2.0 or 3.0. For years, my little studio shuttle has faced me with two USB 3.0 ports and an additional port labeled USB 2.0 /eSATA protruding from its front. Lately, this Shuttle has become my workhorse for data archiving and for packing files for use with the other computers in my studio and in my research lab. I've been using eSATA for years but never thought about it when I needed to purchase an external enclosure for transferring large filed (50GB+) between computers. The USB 3.0 ports have served me well when using SSDs for such transfers, but when I tried the USB 3.0 port with a Seagate 3TB HDD in both this and another enclosure I was underwhelmed with their performance. For fun, I tried the eSATA connection. Of course I probably should have expected it, but connected externally using SATA, the Seagate drive performed almost identically to an identical one that sits inside the Shuttle. That is, while this enclosure was attaining write speeds (from and SSD inside the Shuttle) of about 30-50MB/s, when I connected it using eSATA, I consistently see write speeds to the Seagate in excess of 100MB/s. I found this difference to be amazing. I have now purchased a second one of these as well as the 2.5" version for use with my file transfer SSD. I am very satisfied with the eSATA performance of this drive.

I now have five of these in service in my studio and lab. They remain reliable and fast when using eSATA. However, I have been getting comparable, or even better, performance with USB 3.0 (over 250 MBps sustained write speeds, for mostly sequential files of over 30GB from SSD to SSD) from most of my newer computers. So, while the eSATA connection is imperative in my old studio shuttle, I now use USB 3.0 for most work with these on hewer hardware.
Read more
13 people found this helpful
Helpful
Report abuse

nibin a
4.0 out of 5 stars Great option for RAID storage
Reviewed in the United States on September 29, 2018
Style: NexStar GX - USB 3.0 Dual 2.5" (Type A)Verified Purchase
Good enclosure to leave plugged in. The connections are a bit flimsy and I feel with enough dis/connects, the welds on the circuit board to the connection port will break. I bought it for the purpose of using the internals. I've got two 2TB HDDs running in RAID1. I use it for Time Machine backups of my desktop, laptop and storage. The redundancy provides peace of mind and the read/write speeds are pretty good. The HDDs spin down with inactivity and the entire unit goes to sleep with prolonged inactivity. I use the provided power plug to reduce strain on my BUS and running the HDDs.
Read more
9 people found this helpful
Helpful
Report abuse
See all reviews

Mr H
4.0 out of 5 stars A solid high quality 2.5 inch hard drive enclosure
Reviewed in the United Kingdom on June 12, 2018
Style: NexStar GX - USB 3.1 Gen 2(Type C)Verified Purchase
A solid high quality 2.5 inch enclosure from Vantec. It comes well packaged and requires the use of a screwdriver to install the drive and secure it into place. The screwdriver and screws are provided. One of the screws provided in my package had no thread on it, but the others provide enough grip to keep the drive secure. In all it took me about 5 minutes to install the drive. One thing to note is that the provided self-adhesive rubber feet are used to cover the screws holding the outer case together, hiding the screws completely. This is fine until you need to remove the drive from the enclosure again (e.g. to swap in another drive). At that point the rubber feet may no longer have enough adhesive for a second use. This and the screw-based assembly process mean that this enclosure is best suited to applications that will not require hot-swapping of the installed drive.

Read/write speeds are good. Using a Samsung 850 Pro SSD in the enclosure, connected to my PC via USB 3.1 Gen 2 port, I am getting nearly the same sequential read speeds as an identical internal drive accessed via the PC's internal bus. Sequential write speeds are maybe just 10% less than the internal SSD drive. Random read/write speeds were reported as only around half the PC's internal SSD speed though. Connecting to a PC using a USB 3.1 Gen 2 port was found to be 20% quicker than a USB 3.1 Gen 1 port, as might be expected with that connectors increased bandwidth.

All-in-all I'm happy with this enclosure. It might seem harsh but I'm inclined to knock a star off for the inconvenience of losing the rubber feet if you try to swap the installed drive out. That said I can recommend this a good quality, well built enclosure.
Read more
One person found this helpful
Report abuse

AlanR
2.0 out of 5 stars Throw away the supplied USB Cable ....
Reviewed in the United Kingdom on May 7, 2019
Style: NexStar CX - USB 3.0Verified Purchase
The unit housed a Solid State Drive to enable playback of music. It was attached to a NVIDIA Shield. Without knowing the cause I then suffered problems with WIFI throughout the house. The keyboard attached to the Shield only worked when I stood next to the unit. I thought the battery had gone so replaced it with a bluetooth keyboard. That only worked when on maximum charge. WIFI to my laptop became patchy when the computer was moved to the other end of the house from the router. After reading a document about radiation leakage from SSD's I disconnected the drive and all problems were resolved. I have since bought a double shielded USB cable to replace the supplied cable and everything is working fine. Does anyone want to buy a surplus USB cable and bluetooth keyboard. :-)
Read more
Report abuse

Rob
5.0 out of 5 stars Works perfectly and simple to use
Reviewed in the United Kingdom on February 7, 2019
Style: NexStar TX - USB 3.0 (Updated version)Verified Purchase
Perfect. Took hard drive from my old laptop (which was bricked), stuck it this which is easy and took 5 mins. Data was transferred to new laptop and I now have a spare external drive. Brilliant and simple product.
Read more
One person found this helpful
Report abuse

janet
5.0 out of 5 stars Very useful as extra storage
Reviewed in the United Kingdom on May 21, 2018
Style: NexStar CX - USB 3.0Verified Purchase
I bought this as my Toshiba computer broke and i removed the hard drive and used this to transfer data stored on my Toshiba to my new HP computer and I now use this for extra storage
Read more
Report abuse

B J SAYER
5.0 out of 5 stars really like this
Reviewed in the United Kingdom on October 12, 2019
Style: NexStar GX - USB 3.1 Gen 2(Type C)Verified Purchase
this is a nice case I have 2 also a nectar CX really like these cases
Read more
Report abuse
See all reviews