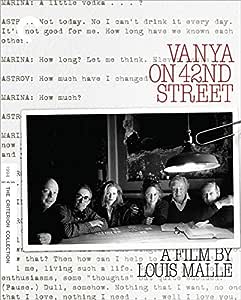 In the nineties, André Gregory mounted a series of spare, private performances of Anton Chekhov’s Uncle Vanya in a crumbling Manhattan playhouse. These treasures of pure theater would have been lost to time had they not been captured on film, with subtle cinematic brilliance, by Louis Malle (My Dinner with André). In Vanya On 42nd Street, a stellar cast of actors—including Wallace Shawn, Julianne Moore, Brooke Smith, and George Gaynes—embark on a full read-through of Uncle Vanya (adapted into English by David Mamet); the result is as memorable and emotional a screen version of Chekhov’s masterpiece as one could ever hope to see. This film, which turned out to be Malle’s last, is a tribute to the playwright’s devastating work as well as to the creative process itself.

4.3 out of 5 stars
4.3 out of 5
80 global ratings
How are ratings calculated?
To calculate the overall star rating and percentage breakdown by star, we don’t use a simple average. Instead, our system considers things like how recent a review is and if the reviewer bought the item on Amazon. It also analyzes reviews to verify trustworthiness.
Top reviews

R. Mathes
5.0 out of 5 stars Just gorgeous. Thank you Louis, Wallace and Andre.
Reviewed in the United States on September 16, 2010
Verified Purchase
If you aren't willing to sit through Chekov, stay away but otherwise, find this and feast!! It is so moving and wondrous. Beautiful performances abound and it is just terrific. I watched it after reacquainting myself with My Dinner With Andre. Tremendously moving and touching. So thrilled to own it and to be able to dive back in now and again and experience the work of gifted and deep people doing something beautiful and rich. Magnificent. Highly recommended! Wallace is just miraculous as is everyone else. This is what artistic work is about. Everybody in the arts wants to make a Citizen Kane and a Sgt. Peppers, a Le Sacre Du Printemps and a West Side Story, a Sweeney Todd and an Angels In America. Andre Gregory's direction and goal seems to be to find a level of communication and depth in the work that is both heightened and yet ultra realistic at the same time; in the end analysis the film therefore is affecting in a way that many productions aren't. He achieves this by working on a smaller scale yet allowing the actors all the room they need to get big when the play demands it. It reminds anyone involved in the arts that the process is everything. Doing good work with all your heart, mind and soul down to the smallest detail is all we can ask of ourselves. Within that there will be artists able to push through and be a part of something transcendent. This film is a lost gem. It didn't and it won't make a big noise. It doesn't matter, it has everything it needs to have to remind anyone who is able to take it in what the arts are all about, especially the theatrical arts. Forgive the sermon. Watch it.
Read more
10 people found this helpful
Helpful
Comment Report abuse

G. Gerard
5.0 out of 5 stars A Minor Classic for Chekhov Fans
Reviewed in the United States on December 16, 2012
Verified Purchase
It was a clever way to introduce the play: Andre Gregory, Wallace Shawn, and other cast members walk along Broadway on their way to the run-down New Amsterdam Theatre to "rehearse" UNCLE VANYA and away it goes. Andre Gregory, Wallace Shawn and Louis Malle gave us MY DINNER WITH ANDRE and then made this wonderful production of this classic Chekhov play in a theatre that seemed beyond repair and is now the Disney's delightful Broadway home. The setting is perfect. The acting is impeccible. We are introduced to Julianne Moore in this production. Every older member of the cast is an iconic stage actor, and Julianne Moore and Brooke Smith shine too. For a theatre fan, a Chekhov fan, a Louis Malle fan, and a lover of this cast, I can't say enough positive things. I had a copy that broke recently and bought the Criterion Series version from Amazon to replace it. It's worth every penny.
Read more
5 people found this helpful
Helpful
Comment Report abuse

Edward Nagel
5.0 out of 5 stars Chekhov At His Best
Reviewed in the United States on November 6, 2012
Verified Purchase
Vanya on 42nd Street is a jewel of a film, combining the adaptations of Andre Gregory (Vanya)and David Mamet's adaptation of this great Chekhov play. It is set in the old NYC 42nd St. Theatre where the Ziegfield Follies were done, a play within the film directed by the late great Louis Malle, with the master's touch on the story and the excellant acting of Wally Shawn as Uncle Vanya, Julianne Moore as the ravishing Yelena, Larry Pine as the burned- out brilliant, jaded Dr. Astrov, with a supporting cast of equals. The intrigue and love/lust angles are exquisitely shaped by the director and actors, bringing 19th Century decadent Russian pre-revolution aristocratric society alive in the elegant " rundown country homes straight out of Turgenyev" set in the old theatre. I have written an adaptation of Chekhov's great novel WARD SIX from his set of short stories, and will produce it soon hopefully off B'way. I watch Vanya... often to get inspiration,great Mamet dialouge and dramatic technique for WARD SIX. Like all great Russian stories from Tolstoy to Chekhov to Dostoyevski, they can be read and viewed on stage and film, time and time again and never get old.This is a MUST SEE film for the Russian film and novel devotee.
Edward Nagel

Charles S. Houser
5.0 out of 5 stars Mamet and Malle make a winner!
Reviewed in the United States on September 29, 2002
Verified Purchase
I remembered loving this "small" film when I saw it in the theater, so I knew I'd be happy with the DVD, whether it had any extras or not (it doesn't). Although Julianne Moore has made it big since making Uncle Vanya ("Boogie Nights," "Nine Months," "The End of the Affair"), and her lovely face dominates the DVD cover, "Uncle Vanya on 42nd Street" is truly ensemble acting at its best. Wallace Shawn as the title character does a powerful job of holding the viewer's interest, even though his Vanya is riddled with smugness, envy, self-pity, and lethargy. There are things about his performance that make you wonder if Louis Malle wasn't thinking of "Uncle Vanya" as a sequel to "My Dinner with Andre" (especially since Andre Gregory plays the director who has gathered his troupe of actors to rehearse Uncle Vanya in the falling down New Amsterdam Theater in New York City). In both movies, Shawn plays a man facing a mid-life crises, plagued with self-doubt and floundering around, looking for reasons to go on.
What struck me on my recent viewing of the film was how timeless Checkhov's story really is. Like Jane Austen, he has a great ability to find the universal in the pettiness of highly-controlled domestic life. In comparing Mamet's rendering with Paul Schmidt's excellent recent translation, it seems Mamet did a good job of crafting speakable lines. He modernized the play without wrenching it from its original time or setting. Since the performance we see is a final run-through, not a dress rehearsal, we receive no visual clues as to when the play within the movie actually begins. Malle's light hand in this regard only reinforces the dubiousness of the distinction between theater/art and reality (a much discussed subject in "My Dinner with Andre").
The decision to film "Uncle Vanya" in the decaying New Amsterdam Theater was an inspired one. When Dr. Astrov (Larry Pine), the play's most forward-looking character, bemoans the cultural and spiritual devastation caused by deforestation and human indifference to the environment, one can't help but think of the plight of 42nd Street itself. The New Amsterdam's resurrection--thanks to Disney dollars--as the current home of "The Lion King" is not without it's ironies. As all of the characters in "Uncle Vanya" are painfully aware, our futures are always purchased at a very high price. And the losses we are likely to experience as we move towards those futures may be greater than any of us will be able to bear.
"Uncle Vanya on 42nd Street" is one of those great works of art, like Eugene O'Neill's "A Long Day's Journey into Night," that makes you stop and take stock of your life.

AlanKS
5.0 out of 5 stars Long long awaited,
Reviewed in the United Kingdom on March 1, 2014
Verified Purchase
I have waited so long to have this on an affordable DVD that I am more than happy to ignore the less than sharp picture quality. The film opens in crowded New York streets, showing the actors arriving at a run down theatre. There is chitchat, a sleigh bell rings and two actors begin the play. It's a rehearsal in everyday clothes. I watched it last night and it was exactly as I remember. Gripping. Mamet's version makes relationships between characters obvious and the lack of costume or scenery soon becomes irrelevant. Camera close ups reveal the pain and disappointment of the character's lives, especially Brooke Smith, who is wonderful as Sonya, as restrained as Wallace Shawn's Vanya is comically and tragically fraught. Why this hasn't been available on region 2 DVD has always amazed me. Warning, according to the description you need to be able to set your player to NSTC to watch it.
Read more
2 people found this helpful
Report abuse

Marionne
5.0 out of 5 stars An outstanding film
Reviewed in the United Kingdom on March 22, 2016
Verified Purchase
This is an outstanding film of Chekov's great play by director Louis Malle. Malle's film shows the play being rehearsed by a group of actors sitting at a simple table on the stage of a magnificent but dilapidated New York theatre in font of a small invited audience. A great cast includes Julianne Moore and Wallace Shawn who captures Vanya's disappointment and frustration with his lot in life perfectly.
Read more
One person found this helpful
Report abuse

Huggermugger
5.0 out of 5 stars Louis Malle was an auteur
Reviewed in the United Kingdom on February 23, 2020
Verified Purchase
So glad this film is on DVD
Read more
Report abuse

Dr. P. H. Collins
5.0 out of 5 stars A favourite film at last on an affordable DVD
Reviewed in the United Kingdom on January 21, 2013
Verified Purchase
Loved this film since it came out but it had always been hard to find on DVD. There was a very pricey import but always managed to resist it. If you can play Region 1 disks then this is highly recommended
Read more
One person found this helpful
Report abuse