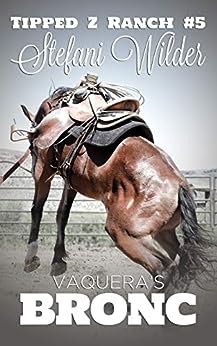 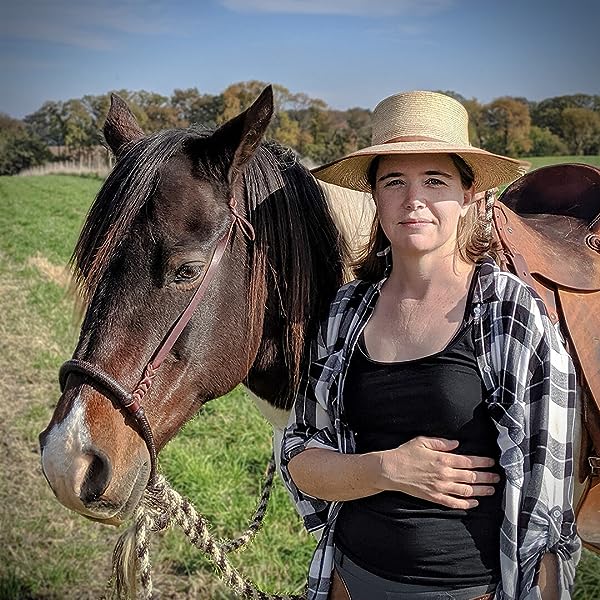 by Stefani Wilder (Author) Format: Kindle Edition
Book 5 of 6: Tipped Z
See all formats and editions
Sorry, there was a problem loading this page. Try again.
When Emma brings home a once wild mustang, she attracts the attention of the cowboy across the fence.

The cowboy is cute and charming and Emma likes him straight away. Unfortunately, the mustang turns out to have some issues. She's a bronc. And while Emma is confident with horses, this mare is a handful. She bucks her saddle off, jumps out of her corral, and does all sorts of things that make Emma look like a fool in front of her attractive neighbor.

Meanwhile, Emma's sister and co-owner of the land where the mustang lives would rather just sell the place and move on. Emma finds herself in the impossible position of needing to tame this horse in time to change her sister's mind, all while trying to redeem herself in the eyes of Tipped Z's new ranch hand.

Vaquera's Bronc can be read as a stand-alone novel, but it is the fifth book in the Tipped Z series. These novels combine horsemanship, family, love, and the Tucson desert into sweet, thoughtful, heart-warming reads. Discover them all:

The short story Thrown is also available. An extended epilogue to A Man Who Rides, Thrown is exclusive content offered for free to members of Wilder's mailing list. Learn more at stefaniwilder.com.

Stefani Wilder writes heartwarming and sweet contemporary western romance set in the unique and beautiful Sonoran desert of southern Arizona. She draws deeply on her own extensive experience with training horses, along with details from her life growing up in a wild, rural landscape. Her novels are vivid, authentic, and impossible to put down.

Stefani was born in Arizona. She spent her childhood exploring the wild foothills of the Sonoran Desert on horseback, often getting into scrapes on her sturdy mare, Blue. Always an avid reader, when she won her first short-story writing contest at the age of 9 she decided instantly she would become an author as well.

Since then, Stefani has never stopped writing. While attending Northern Arizona University pursing degrees in English and traditional printmaking, her short stories appeared in a number of magazines, including Scribindi and the Edgar Review. Stefani's thesis project for her BFA involved the creation of a hand bound book and a collection of short stories, each modeled after a fairy tale and accompanied by an original serigraph print.

Since her graduation in 2006, Stefani has continued to write and to work with horses. She and her husband regularly rehab troubled horses and help their students improve their riding and handling skills. In 2012, she read one book too many that promised to be about horses but contained no horsemanship whatsoever. Her first novel aimed at creating a different kind of horse story, A Man Who Rides, came out in 2013 and became a #1 Amazon bestseller. Since then, her Tipped Z series has expanded to five titles. All these books are set on a fictional working ranch called the Tipped Z. Book number six, Vaquera's Gold, is slated for publication in 2021.

Stefani lives in Iowa City with her husband, her Australian Shepherd, and their small herd of horses. She also writes epic fantasy under the name Robin Stephen.

GBD
4.0 out of 5 stars Easy read
Reviewed in the United States 🇺🇸 on July 15, 2020
A love story revolving around horses on an inherited ranch.
Read more
Helpful
Report abuse

Hallie's Mom
5.0 out of 5 stars A Story that Hit Home
Reviewed in the United States 🇺🇸 on July 18, 2020
I loved this story. I can identify with the angst of having a green broke horse and trying to find the courage to work through the steps that make a good horse. A love connection thrown in makes it even better. I can't wait for the next Tipped Zero book.
Read more
Helpful
Report abuse

ropinmom
5.0 out of 5 stars Love!
Reviewed in the United States 🇺🇸 on August 8, 2020
Love Stefanie Wilder and this series! A super addition, but you don’t want to start here...start with book 1 so you don’t miss any of this great series! HIGHLY recommend!
Read more
Helpful
Report abuse

Cindy Flynn
5.0 out of 5 stars I couldn't put it down
Reviewed in the United States 🇺🇸 on July 28, 2020
The newest installment of this series might be my favorite yet. Letting go of self doubt and grief are tough. This was a touching story that will appeal to the masses.
Read more
Helpful
Report abuse

Jeanne Richardson
4.0 out of 5 stars Good Book
Reviewed in the United States 🇺🇸 on July 22, 2020
This is the 3rd book I've read written by Stefani Wilder; she has done a great job at writing a good book; I can’t wait to read more of her books.

Kathleen Bulfon
5.0 out of 5 stars A Great Romance!
Reviewed in the United States 🇺🇸 on July 26, 2020
When I started reading this story, I could not put it down. I read the book in one day. This author is an awesome writer. I can not wait to read more of their books. Keep up the great work. You should definitely read this book.
Read more
Helpful
Report abuse
See all reviews
Report an issue
Does this item contain inappropriate content?
Report
Do you believe that this item violates a copyright?
Report
Does this item contain quality or formatting issues?
Report