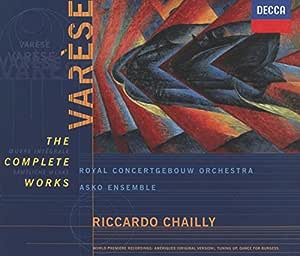 For a composer who is (now) recognizably part of the 20th-century classical canon, the French émigré Edgard Varèse's output was astoundingly meager. Just 15 compositions from his entire life (he destroyed the compositions from his early years, and was a merciless editor of his own material in general) made it out to the listening world. Varèse was caught in the chasm between the music of yesterday and the music of tomorrow: scoring music for modified theremin, steamboat whistles, or air sirens, all balanced with the force of a large orchestra; writing pieces based on the flows of water and wind because that's what shapes the earth; using the concepts of chemical reactions and specific gravity as a basis for his music. Using extremes of contrast, dissonance, and variety in sound, Varèse's pieces had power in the way he attacked and shaped the sound he imagined. From Ionisation (1929), scored almost entirely for unpitched percussion, to the electronic-only, three-dimensionally produced Poeme Electronique (1958), he's provided a foundation that many genres, musicians, and composers were to build from not only for the next 40 years, but inevitably beyond. --Robin Edgerton

4.3 out of 5 stars
4.3 out of 5
29 customer ratings
How does Amazon calculate star ratings?
Amazon calculates a product’s star ratings based on a machine learned model instead of a raw data average. The model takes into account factors including the age of a rating, whether the ratings are from verified purchasers, and factors that establish reviewer trustworthiness.
Top reviews

Kirk A Kubicek
5.0 out of 5 stars But This Today
Reviewed in the United States on August 30, 2017
Verified Purchase
To get all of Varese in one place at this price point is more than I could have hoped for. I have been a fan of Varese since the late 1960s when it was Frank Zappa who first made mention of his music in the liner notes for Freak Out. I have been a fan of the Royal Concertgebouw orchestra and hall since listening to Bernard Haitink's performances of the Mahler 9 and Das Lied. Same with Chailly's Mahler cycle with the Conertgebouw. Now he tackles one of the more challenging composers of the 20th century and delivers exciting and listenable performances of Varese's complete works. The major works like Arcana, Ameriques, Deserts and Ionisation stand up well against the Boulez performance of these pieces with Chicago. But now you get to hear smaller works, vocal pieces and electronic realizations to get a broader picture of Varese's vision for modern music. I cannot say enough about this project and urge people to ignore the complaints about Varese's acolyte Chou Wen-Chung's involvement with it. I have already listened to this all the way through several times and anticipate doing so more and more.
Read more
3 people found this helpful
Helpful
Comment Report abuse

Mike Morrison
5.0 out of 5 stars Perfect set if you like Varèse
Reviewed in the United States on November 23, 2013
Verified Purchase
Like all avant garde composers of this or any other day, Edgard Varèse is an acquired taste. If you like or wish to explore his music, this set is for you. It is complete, perfectly realized, and magnificently recorded.
Read more
2 people found this helpful
Helpful
Comment Report abuse

Charles Peterson
5.0 out of 5 stars Fantastic in every way
Reviewed in the United States on November 29, 2009
Verified Purchase
This Amazon "Essential Recording" is fantastic in every way, composition, performance, and recording. You will want to turn all the lights off to get the full effect, and this recording will keep you captivated. The dynamic range and the spacious imaging are unmatched. I use it to show off my high end audiophile system. I'd give it ten stars out of five if I could. It is extreme and weird, but never boring, raucus, or atonal to current listeners. You will not want to turn it down. You can hear how the work of this composer, famous mainly to musical insiders, has influenced the music of every science fiction and thriller soundtrack ever since. They are but pale imitations which do not match the richness and variety of this work.
Read more
4 people found this helpful
Helpful
Comment Report abuse

Sal
5.0 out of 5 stars It is Wonderful!!!
Reviewed in the United States on March 3, 2014
Verified Purchase
I like to listen to the Varese's compositions... You never get tired and I find out new things every time I listen to them!
Read more
Helpful
Comment Report abuse

J. Pour
2.0 out of 5 stars Lighten Up Please
Reviewed in the United States on October 21, 2007
Verified Purchase
I once heard that Frank Zappa was inspired by Varese, so I decided to give him a listen. Now I understand why I never really took to the Mothers of Invention. Varese's composing style seems very heavy handed. Generally the brass and percussive pieces are really (and too often) over-layered and over-the-top, and his use of percussive toys is, all to often, way over done. The electronic experimentations seem disjointed and simple and don't really seem to fit well and the vocals seem a bit silly. Having said these things, three pieces (11-12 minutes of sound out a 140 minute-plus 2 disk box) did work very well for me - Ionisation, Density 12.5 and Dance For Burgess, which were all on disk 2. So now I program these as an enjoyable little 3 piece suite.
Read more
8 people found this helpful
Helpful
Comment Report abuse

Prescott Cunningham Moore
5.0 out of 5 stars Essential
Reviewed in the United States on January 9, 2011
Varsese is still woefully underrepresented on disc and, for some time, this set remained the only complete set of Varese's output. Since then, however, Naxos has releases all the orchestral works with Christopher Lyndon-Gee, and more conductors and audiences alike have been coming to this music. Why Varese has not enjoyed more success is probably due to the seemingly austere nature of his later music but, like Weber or Berg, continued exposure reveals music of the highest caliber by a true genius.

Chailly knows this and in him Varese has found a winning advocate. Competition in the later compositions is scarce, which in-of-itself makes Chailly a prime recommendation. But that should in no way diminish the work of the ASKO Ensemble, navigating the rhythmic insanity of Ionisation with ease or finding perfect ensemble balance in Octandre. It is in the earlier, more expressive works, however, where Chailly is not always the clear winner.

For Ameriques, Chailly chooses to perform the "Original Version," complied from sketches by Varese's long-time pupil, Chou Wen-Chung, a mistake in my mind. The "Original Version" is about five minutes longer, more diffuse, and has a less satisfying conclusion. That isn't to say the music is not still fantastic, especially with the fabulous off-stage brass effects and larger, more colorful battery of percussion. Still, my reference Ameriques remains Dohnanyi's Decca performance of the revised score. Dohnanyi is just as probing as Chially but has at his disposal a better instrument - the Cleveland Orchestra. While the Clevelanders certainly do not match their Dutch colleagues in terms of color, they can do something the Concertgebouw has never been able to do, that is play with rhythmic intensity. The soft-edged slackness and rounded edges of the fabulous Concertgebouw robs the music of some intensity. Decca's more atmospheric recording captures the bloom of the famous Amsterdam hall, but the more upfront microphone placement at Severance give the music a more visceral impact.

On the other hand, Chailly's Arcana remains the performance of choice, improving on the somewhat grey toned Boulez performance on Sony. I would prefer, again, a bit more crispness from the lower strings, but the energy and excitement is palpable, and no orchestra can match the Dutch winds in terms of color, making music where other ensembles sound screechy. Tuning up, like Berio's Sinfonia, is chocked full of musical quotations, and is great fun, while both versions of Un Grand Sommeil Noir are really spectacular.

In the end, an amazing achievement in such difficult music, and Chially's ability to characterize each piece is commendable. I would urge those that love Ameriques to search out Dohnanyi's long out-of-print performance but this set is easily recommendable as the best complete set of Varese's works currently available.

Richard R. DiPuma
5.0 out of 5 stars Basic listening for 21century music and beyond
Reviewed in the United Kingdom on February 5, 2013
Verified Purchase
This is where Frank Zappa fell in love with 20th century classical music. Excellent sound and performances with that great Decca sound. Very enjoyable collection to expand your musical mind.
Read more
2 people found this helpful
Helpful
Sending feedback...
Thank you for your feedback.
Sorry, we failed to record your vote. Please try again
Report abuse

Colonel Mustard
5.0 out of 5 stars The Ultimate Varèse Edition!
Reviewed in Canada on April 18, 2013
Verified Purchase
To finally have recordings of these classic works that I have enjoyed since the 1970s back in my collection, with the addition of three previously unknown pieces, the star of which is Un Grand Sommeil Noir, here presented in two versions, is an event! Some of the criticisms given by other reviewers bear consideration, but this set can still be considered the ultimate Varèse edition. The performances offered satisfy fully. To address some of the criticisms, it might be worthwhile to also collect  Varese: Ameriques (20C) , so as to hear alternate versions of the great orchestral pieces under the direction of Pierre Boulez, who interprets Varèse with a softer touch and less banging and clanging.
Read more
Helpful
Sending feedback...
Thank you for your feedback.
Sorry, we failed to record your vote. Please try again
Report abuse

See all reviews from the United States
Pages with related products. See and discover other items: riccardo chailly